Female Rally Drivers After 1950: the USA 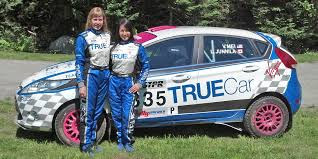 The rally scene in the USA is growing every year, and female drivers are very much a part of that. Some of the profiles below originally came from the Rally Drivers in the Americas post. Gail Truess has her own post.

Lucy Block – first rallied in America between 2009 and 2013, initially as a co-driver. Her first rally as a driver was the Middle Cog rally in 2009, swapping seats with Christine Beavis. Her car was a VW Golf. She took the wheel again in 2010, driving a Mazda3 in the Mexico Rally and finishing 17th. She was also 19th in the LLCote Rally. A break from competition followed, but she returned in 2013, in a Ford Fiesta R2. Her best results were two fourteenth places, in the Maine and New Hampshire Rallies. After a break, she reappeared in 2015, driving a Ford Fiesta. Her best finish was eleventh, in the New Hampshire Rally. After another hiatus, she made a full-time comeback in 2018. She contested the ARA rally championship in the States and earned her first top-ten finish in the New England Forest Rally. Her car was a Fiesta R2T. In 2019, she made a small comeback and drove the Fiesta in the 100 Acre Wood Rally. She was 24th overall. Lucy is married to WRC driver and Gymkhana creator, Ken Block.

Renee Brinkerhoff - US historic rally driver who drives a Porsche 356. She has tackled two editions of the Carrera Panamericana in this car, in 2014 and 2015. She was 18th in 2014, after a 678km rally across Mexico which only about half of the field finished. Her final position in 2015 was 41st. In 2019, she travelled to Kenya for the East African Classic Safari. She was fifteenth overall after being allowed to restart under SuperRally rules. Only six cars finished every stage.

Keanna Erickson-Chang - American driver who has rallied extensively in her domestic championship and is now making trips to Europe. She began her career in ice racing and autocross in 2013, before moving into stage rallies. Her main rally car until 2018 was an R1-spec Ford Fiesta, which she started rallying in 2015. Her best results in 2016, her first full season, were two eleventh places in the Olympus and New England Forest rallies. She broke into the top ten for the first time in 2017, finishing ninth in Rally Wyoming and winning her class. She earned five top-ten finishes in 2018, the best of these being an eighth place in the Muscatell Ojibwe Forest Rally, in front of the experienced Travis Pastrana. The Fiesta was upgraded to R2 spec in 2019 and she also tried out a Renault Clio for two rounds of the French Clio R3T championship: the Vosges and Lyon-Charbonnieres events. She is entered into the 2019 Wales Rally GB in the Fiesta.

Tracey Gardiner - driver from the United States, who began rallying in earnest in 2013, despite being in her 40s. Initially, she drove a Subaru Impreza in the two-part Sno*Drift Central Regional Rally, and was 17th and eleventh on the twin events. In April, she took delivery of a Toyota Yaris, and promptly won the Production class in the Wagons Ho! Rally. She was 42nd overall. That year, in the Yaris, she managed three more class wins, in the Trail’s End, Ottawa and Lac Vieux rallies. Her best overall finish was 16th, achieved twice, in the New England Forest and Lake Superior Rallies. She was 32nd in the Rally America championship. 2014 was a shorter season, as the Yaris, nicknamed “Jellybean” was damaged during the Susquehannock Trail Rally, in May. Tracey returned in October for the Lake Superior Rally, and scored her best finish of the year, fourteenth, and second in class. She was 25th in the championship. In 2015, still driving the little Yaris, she was 18th in the Rally America championship, with three thirteenth places in the Oregon Trail, Lake Superior and Olympus Rallies. After a break of a year, she competed again in the Yaris in 2017. She was 20th in the Rally America championship, and earned a twelfth place in the Rally of Wyoming. In 2018, she continued with the Yaris and picked up 17th spots in the Blazing Saddles and Prospectors Run Rallies. Her only event in 2019 was the 100 Acre Wood Rally and she was 29th in the Yaris. As well as actually competing, Tracey runs TAG Rally Sport, her own team, and a motorsports marketing agency.

Jennifer Imai - rallied a Suzuki Swift in the Rally America championship between 2006 and 2013. She started in shorter rallysprints, but moved into stage rallies fairly quickly. The first of these for her was the 2006 Desert Storm Rally. After a tough 2010, in which she did not finish many events, she broke into the top ten in 2011, in the South West division. She was fifth in the Desert Storm Rally and ninth in the Mendocino Rally. Her best finishes since then have been a trio of twelfth places in 2013, in the Mendocino, Bear Valley and High Desert Trails events. Since then, financial issues have kept her off the stages, although she appears to have done some co-driving and perhaps some engineering since. Next to Verena Mei, she is the only Asian-American female rally driver.

Verena Mei - American driver who started out as part of the import scene, competing in drifting as well as promo modelling. In recent years, she has moved into mainstream motorsport, and is active in the US rally championship. She took up rallying in 2011, undertaking training before driving competitively. Her first event was the Sno*Drift Rally in 2011, as a navigator to Wyatt Knox. In 2012, she started driving herself, in a Ford Fiesta. She achieved some good class finishes, and even won the B-Spec National Championship, as well as finishing fourth in the 2WD standings. In 2013, she carried on with the Fiesta, run by the Truecar team and partly supported by Ford themselves. With her usual co-driver, Leanne Junnila, she finished five of her six events, with a best result of twelfth, in the Ojibwe Forests Rally. She was 20th overall in the US championship.

Christy Nelson – rallied in the Rally America championship between 2010 and 2013. Her first car was a Nissan Sentra, and she was second in her first event, the Nocona Rally Stomp. In 2012, after a couple of seasons of solid results, she upgraded to a Subaru Impreza WRX, and had a best finish of fourth, in the 100 Acre Wood Rally. 2013 was a strong year, with four class podiums, the best of these being a second, in the Drift Regional Rally. She was 20th overall. Prior to taking up rallying, Christy was a successful club rallycross competitor, winning SCCA championships in 2008 and 2011.


Lavinia Roberts – American driver who entered the World Cup Rally in 1970, which ran from London to Mexico. Her car was a Ford Mustang, and she was part of a three-driver team with David Jones and Arthur Hazelrigg. They did not finish. In 1971, she is on the entry list for the Southern Cross International Rally in Australia, but no further details are forthcoming.

Amanda Skelly – rallies a 1998 Subaru Impreza in her regional Rally America championship. She began in 2012, in the SnoDrift Rally. She returned to the event in 2013, finishing 19th overall. Her best finish that year was twelfth, in the Drift Central Rally. In 2014, she earned another two top-twenty finishes in the Sno and Drift Rallies. Her 2015 programme was similar, with her best finish being 14th, in the SnoCentral Rally. As well as driving, In 2016, she rallied a Subaru Impreza in Rally America's Central division. Her best finish was thirteenth, in the New Hampshire Rally. She entered the New England Forest Rally in 2017, but this was mainly to try out a new version of the Impreza. The car came out for a full season in 2018 and she excelled in rallysprints, finishing third in the Eastern Tennessee event. She had a standout performance in the 2019 Sandblast Rally, finishing fifth. Amanda also co-drives on occasion, and she and her 2015 navigator, Ian Kessel, have taken turns in both seats. Her team is called Noble Star Rally and includes her sister, Desiray, among its members. Desiray was her first co-driver.


Kristen Tabor - rallies a Subaru Impreza in Rally America events. She is from a family of rally drivers, and she is normally co-driven by her mother, Janice. She began rallying the Impreza in 2012. In her second season in the car, she was eighth in the Mendocino and Bear Valley Stages rallies, which helped her to second in class in the Rally America North West Division. In 2016, she was ninth in the North West standings, and class L champion. Her best result was fifth, in the Shunpiker Stages. She drove the Impreza again in 2017, but was not as successful. She did not reach the top twenty in any of her six rallies, although she secured two second places in class. In 2018, she earned three top-twenty finishes in the latter part of the year, the best of these probably being a 16th in the Tour de Forest Regional Rally, as she picked up class second. Her best finish in 2019 was an excellent third place in the Dirtfish Regional Rally, from 22 finishers. Prior to owning the Impreza, she rallied an Acura RSX, in which she won class championships in 2010 and 2011. She has been active in the sport since the 1990s.