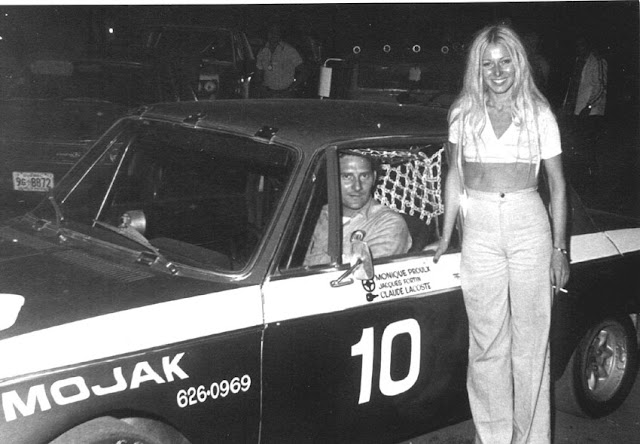 Monique Proulx was a Québécois driver who raced mostly in Canada in the 1970s.

She was born in 1947, and had a rather shaky start in life, contracting polio at the age of three, which meant that she had difficulty walking until she was a teenager. Initially, she worked as a teacher. This came to a temporary halt at the end of 1965, when she found herself with a baby son, Stéphane. As a single mother, she continued to work, but now as a model and actress. In 1971, she appeared in several Canadian TV adverts, including one for tights. She also owned a local chain of beauty salons.

She began racing in 1971, after becoming romantically involved with Jacques Fortin, who raced at club level. They shared a BMW 2002, and Monique also raced a Datsun 240Z. She started out in novice races, and often made the podium. She finished as runner-up in a Canadian Production endurance championship in the Datsun. Her start in motorsport apparently followed a court battle with the Canadian Auto Sports Club, which had vetoed her international license being awarded. Early in her career, she had a female rival, Louise Roberge. The press were keen to publicise their apparent dislike of one another.

In 1972, she bought her first single-seater, a second-hand 1600cc Formula Ford. This car was far more expensive to run than the BMW, so she continued to share her boyfriend’s car, making only a few appearances. In the BMW, she was eighth in the Sanair Trans-Am race.

Another run in the Sanair Trans-Am race in 1973, in the same car, led to a fourteenth place. She was the top Canadian finisher.

After some Formula Ford and Formula Vee races, she raised her single-seater game in 1974, and took the step up to Formula Atlantic. In her first season, she became the first woman to qualify for a race at the US Grand Prix at Watkins Glen, although it was a support race, rather than Formula One. This year, she raced Alan Karlberg’s car, with sponsorship from Kimberly-Clark.

Back in a saloon, she was the first, and still the only, woman to win a mixed race at Catamount Speedway. She was racing in Ministocks.

She competed in Formula Atlantic between 1974 and 1979, once scoring a pole position in 1976. Due to sponsorship pressures, she did not complete as full season during this time. In 1975, she was sponsored by New Freedom, a new brand of sanitary towels, which was somewhat shocking in the male-dominated world of motor racing. Driver and commentator David Hobbs is meant to have joked, “I’m only worried it will rain and the damn car will swell and not get between the guardrails!”

Monique was quite successful in getting innovative sponsorship deals, albeit short-term ones. She was apparently the first female driver to be sponsored by a tobacco company, although the details of this are proving hard to find. This was probably due to her TV work, which included acting, stunts and being a “traffic girl” in a helicopter. In 1976, she appeared on the Canadian version of “Superstars”, but was not among the leading sportswomen.

Later, she also raced a Chevrolet Camaro. In 1979, she did at least one race in Trans-Am, at Trois-Rivières, finishing eighteenth.

Her son, Stéphane, was also a racing driver. She retired from the circuits in 1980, in order to support him in his own racing activities. He was a contemporary of Jacques Villeneuve and was tipped as one to watch. He died in 1993, from head injuries complicated by advanced HIV.