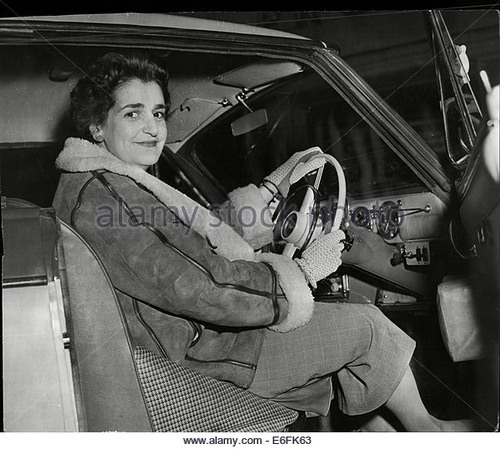 Mary in a Sunbeam Rapier

Mary Handley-Page was one of a group of British female drivers who were part of works teams for British manufacturers in the 1950s and 1960s.

Her family was involved in engineering; her father, Frederick Handley-Page, gave his name to a series of aircraft, and his company built the famous Halifax Bomber. Mary was his youngest daughter, born in 1923 and originally christened Patricia.

As a girl and young woman, she rode horses and hunted to hounds. Equestrianism has proved to be a surprisingly good training for rally drivers, the best example being Pat Moss. When Mary was just eight, she was awarded a prize in the Stanmore Gymkhana for "Trotting". The cup was awarded by Amy Johnson, the pilot. She was at the height of her fame and also a rally driver herself.

Her first major appearance seems to have been the 1956 RAC Rally, driving a Rover. Her co-driver was Jo Ashfield. They were second in the Ladies’ standings. The pair rallied together again on the Tulip Rally, sitting in the opposite seats. The car was a Standard, and they were 169th overall.

She was involved with the social and organisational side of motorsport, too. The 1957 Monte Carlo Rally Ball, a charity event, was put on by a committee including Mary and Stirling Moss. The ball's President was Sheila van Damm. Mary and Sheila were friends who sometimes drove together.

Mary returned to the Tulip Rally in 1957, at the wheel of a Sunbeam Mark III. She was back in the driver’s seat, with Francoise Wilton Clarke on the maps. They finished, in 134th place.

She was part of the works Sunbeam team from 1958 to 1960, driving one for their ladies’ team, with other female drivers. For the 1958 Monte Carlo Rally, she was the leader of a three-woman Sunbeam team, with Lola Grounds and Doreen Reece. Mary and Lola were a good team. As a duo, they were 21st in the 1958 Tulip Rally, in a Rapier. Mary was then sixteenth in the Alpine Rally in the summer.

Lola had moved to the Ford team for 1959, and Mary had a new co-driver in Daphne Freeman, who had got into motorsport through her work as Stirling Moss’s secretary. The new pairing entered the Monte, with Joyce Howard as a third driver, but had an accident and could not finish. As a two-woman team, Mary and Daphne were 39th in the Tulip Rally, again in a Sunbeam Rapier.

Away from rallying proper, Mary was part of a team of female Rootes Group drivers sent to prove to the Belgian motorsport authorities that a Hillman Minx was able to manage 15,000 miles of bad Belgian pavé. Averaging 40mph, the team covered the distance in three weeks during the Rallye des Routes Pavées. The team included Nancy Mitchell, Sheila van Damm, Patricia Ozanne and Francoise Clarke. They were said to be responsible for a sharp spike in continental Hillman Minx sales.

At the beginning of 1960, Mary went back to the co-driver’s seat for the Monte, assisting Jimmy Ray to eleventh place. It was quite unusual for her to be part of a mixed team. With a new co-driver again, Nesta Gilmour, she finished 105th in the Tulip Rally, in a Rapier. The Alpine Rally was another of her favoured events, and she was 27th in 1960, co-driven by Patricia Ozanne.

She continued to drive private Sunbeams in 1961, including a Rapier on the Monte Carlo Rally, with Pauline Mayman and Daphne Freeman. They had been running well, but a puncture prevented them from claiming a penalty-free run. An unusual part of their rally plan was the delivery of smoked salmon to Prince Rainier and Princess Grace. The fish had come from a manufacturer in their start city of Stockholm. It is unclear whether the delicacy reached its intended recipient. Mary and Pauline drove the same car on that year’s Tulip Rally, and were 43rd overall.

For the 1962 Monte, she co-drove for Patricia Ozanne, in a Mini, which Patricia had bought from the works BMC team the previous year. They started from Warsaw, but do not appear to have finished. This was Mary’s last major rally.