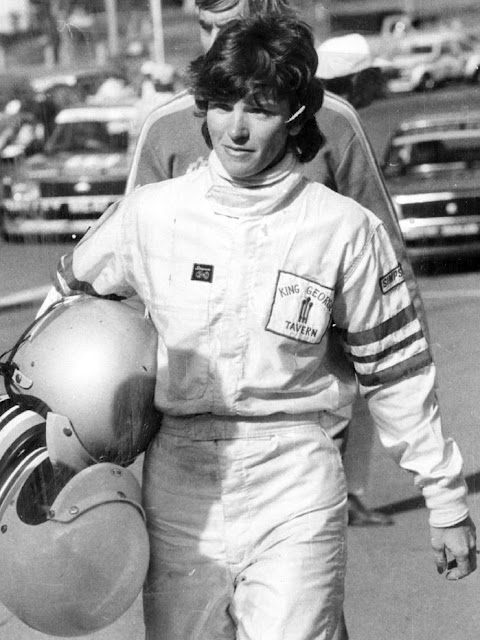 She took part in nine Bathurst 500/1000 races between 1968 and 1984. Her team-mates included Glenn Seton, Sandra Bennett and Marie-Claude Beaumont. She drove a variety of cars, including a Nissan Pulsar, Ford Falcon, Mini and Holden Monaro. Her first try at the event was in 1968, in a Mini. She was part of an all-girl team with Midge Whiteman, whose second time at Bathurst it was. This happened in only her second year of racing: she began in 1967, with a Mini.

Christine was from a family of racers, and it was not surprising that she got into the sport. An early boyfriend raced Minis, and lent her a car. Her first season was spent in a women’s championship based at Oran Park. She won every round of the championship apart from the first one, in which she was third.

Her second Hardie-Ferodo 500 was at the wheel of a Fiat 125, in another ladies’ team with Lynne Keefe. They did not finish. Christine later described how the small, light Fiat was pulled across the track in the wake of the bigger cars.

In 1970, she used one of the bigger cars herself, a Holden Torana. She and Sandra Bennett were a more accomplished thirteenth overall, driving for the Holden Dealer Team. The same driver pairing tackled the Sandown Three Hour 250, but it is not clear whether or not they finished.

She took a break in 1971; this year, she married fellow racer, Fred Gibson, returning as Christine Gibson.

A second ride in the 500 in a Torana in 1972, this time with Pat Peck as a team-mate, led to a DNF. The following year, she switched allegiance to Alfa Romeo, driving a GTV 2000 in the big endurance races. Christine and Sue Ransom did not finish the Hardie-Ferodo 500 or the Phillip Island 500.

She was then absent from Bathurst for a couple of seasons, partly due to a sabbatical from motorsport, and, for 1975 at least, to concentrate on the Australian Touring Car Championship. She was still “in” with the Alfa Romeo team, and drove the GTV to fifth overall in the series, with four class wins. This was her best result in the ATCC.

Away from Bathurst, she competed on and off in Australian Touring Cars, later, often for her husband Fred Gibson’s team. Her best season for this was 1975, when she was fifth overall after winning the 2000cc class four times and remaining a regular feature in the overall top ten. Her car was an Alfa Romeo GTV 2000.

During her absence from the Hardie-Ferodo 500, the French driver, Marie-Claude Beaumont, had stolen her place as the premier female Bathurst racer. In 1975, she was sixth in the 500, driving an Alfa Romeo GTV 2000 with John Leffler. On Christine’s return to the 500 the following year, they teamed up, in an Alfa Romeo Alfetta GTAm, but sadly did not finish.

Christine retired from active competition for the rest of the 1970s, only to return in 1981. That year, she drove a King George Tavern Ford Falcon in endurance races, with Joe Moore. In spite of her lack of current seat time, she took her “top lady” honours back from Marie-Claude Beaumont, with a sixth place. The same driver pairing was tenth in the Hang Ten 400.

In 1983 and 1984, Christine was a works Nissan driver, alongside her husband, Fred. As part of the Australian Endurance Championship, she drove a Pulsar with Bob Muir in the 1983 500, but did not finish, due to a mainshaft failure. She did not finish the Sandown round of the AEC either,

The same year, she took part in some races in the AMSCAR championship, driving a Bluebird.

She used the Pulsar for both series in 1984, and managed eleventh overall in AMSCAR. She drove in the 500 again with the experienced Glenn Seton, did not finish, due to a broken half-shaft.

1984 was her last season of competition. She has remained active in Australian motorsport, as an administrator and organiser, and is still remembered as the First Lady of Bathurst.