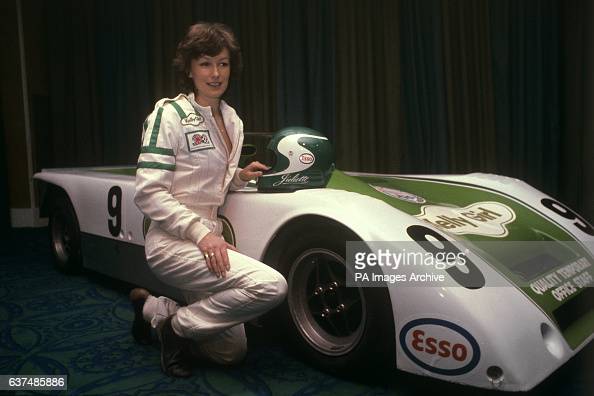 Juliette with the Kelly Girl Lola

Juliette Slaughter (née Scott-Gunn; also Brindley) was most famous for her Le Mans entry in 1978.

Her racing career began in 1970, as Juliette Scott-Gunn, after she inherited some money. There was some history of motorsport in her family; her father had the distinction of being a racing vicar at Brooklands. In 1971, she won the British Women Racing Drivers’ Club’s Helen Spence Trophy, for the best newcomer. She competed in Class C of the Castrol Production Saloon Championship in 1972, in a Ford Escort, scoring one class win at Brands Hatch. In August, she raced in the BWRDC’s “Fast Girls Ford Consul Challenge” at Brands, and was twelfth, out of seventeen drivers, after a spin. The winner of this event, Gillian Fortescue Thomas, was presented with a fur coat by Graham Hill.

She met her first husband, Andy Slaughter, on-track, when he drove into her car! They were both racing in Production Saloons at the time. Between 1972 and 1974, she concentrated on her career in personnel. At one point, she was part of Mark Thatcher’s management team.

When she returned in 1975 as Juliette Slaughter, she was involved in the sport both on and off the track. Her day job was in the press office at Brands Hatch, under the management of John and Angela Webb. The Webbs were skilled promoters, and Juliette gained a reputation is a marketing expert.

One of John Webb’s favourite marketing ploys was using female drivers to create media interest. He had trained up a “stable” of women racers, some from the world of celebrity, or other sports, who raced under his Shellsport banner. They became known as “the Charm School”, and were not always taken seriously. Although John Webb always had one eye on the promotional value of his drivers, he also believed in them as racers, and helped to launch the careers of Divina Galica and Desiré Wilson.

Shellsport acted as the sponsor for the BWRDC’s invitation Ford Escort one-make challenge. It began in 1974, and Juliette took part in two of the three races, with a best finish of second. This was achieved at her home track, Brands Hatch. The series ran as a championship proper in 1975, and she entered three of the four rounds. She was sixth twice, this time at Mallory Park and Snetterton. She managed another two second places at Brands in 1976, behind Divina Galica, but had the consolation of a joint fastest lap and class record in the second race. She set another lap record at Snetterton in 1977, in the same car, and was second in the race itself.

She was an enthusiastic member of the BWRDC. Their 40th anniversary book, Mary’s Girls, tells of her participation in a women’s Demolition Derby in 1975, and a humorous imaginary film called “The Bird Life of a Northamptonshire Village”, in which she was going to discuss “fashion on the grid”.

In 1977, Juliette mainly raced a Shellsport Renault 5 in the Production Saloon championship. She scored at least one fourth place, at a Christmas meeting, and won her class at Thruxton, leading to another BWRDC accolade, the Embassy Club Championship. That year, she was also announced as the second driver in Divina Galica’s Sports 2000 Lola T290. Reports suggest that she took part in at least one event in the car, which was sponsored by the Kelly Girl employment agency. This may have been down to Juliette’s own negotiation, as she had previous experience in the field, and was now a marketing manager at Brands Hatch.
The Lola was one of several cars she raced in 1978. The Renault was kept on for use in Production Saloons, and she also had the use of a Triumph TR7 for production sportscars.

Her biggest race of 1978 was undoubtedly Le Mans. She was driving a Kelly Girl-sponsored Lola T294S, with Ian Harrower and Brian Joscelyne. They suffered engine trouble and did not finish, only managing 61 laps. That said, all drivers had put in some respectable times, particularly considering the age of their car, and their lack of big-race experience.

The following year, Juliette drove a Porsche 924 in the Brands Hatch 6 Hours with Win Percy, and they won their class, finishing 22nd overall. Again, this was a strong performance in an underpowered car, which had proved hard to qualify.

Away from the major races, and after her Le Mans outing, she accepted a drive from Gerry Marshall Racing in Production Saloons, driving a Triumph Dolomite, in 1979. Unfortunately, no results are forthcoming for this car/driver combination.

Later, she drove a VW Scirocco in the same championship. She finished on the Production Saloon podium six times during 1980, with a best finish of second. This included a drive in the Willhire 24 Hours, as part of a team that included Stirling Moss and Desiré Wilson, and was sponsored by the “mens’ magazine”, Mayfair. She continued with the Scirocco in 1981, when she teamed up with Tony Lanfranchi.

She retired in 1982 to pursue her business career, and other interests. For many years, she put her promotional and organising expertise to good use on the committees for various horse trials, having taken up riding.