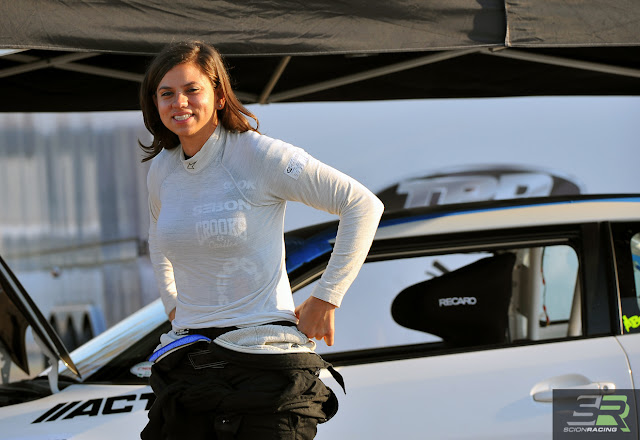 Below are some profiles of women racing touring cars in the USA. Some of these have been split off from the Female Drivers in Touring Cars in the Rest of the World post. Shea Holbrook has her own profile. For female stock car drivers, try here or here.

Michele Abbate - races a Scion FR-S (precursor to the Toyota GT86) in the USA. She started out in time trials and Time Attack events, before moving into circuit racing in 2009. She has mainly competed in SCCA Nationals, where she has achieved considerable success, including a Western Conference championship win in 2015. In 2014 and 2015, she raced in the US Touring Car Championship. She was seventh in the 2014 series, but only competed in one 2015 race. Her continuing strong performances and skill in finding sponsorship have led to a drive in the 2017 Bathurst 6 Hour race, for Pedders Racing. She drove a Toyota GT86 with Grant Phillips and was eigth in the Production class. In 2018, she raced a Chevrolet Monte Carlo in the SCCA GT-1 Runoffs and was third. In 2019, she did a single race in the Trigon Trophy (Trans Am) at Road Atlanta, driving a Chevrolet Camaro.

Geri Amani - races touring cars and single-seaters in the USA. She is a multiple race winner in SCCA Improved Touring, and finished in the championship top three in 2013 and 2014. In 2014, she also entered the US Touring Car Championship, driving a Mazda3. She did one race, and was fourth in class, at Laguna Seca. That year, she did her first single-seater races as well, finishing third in Formula F in a 1600cc Formula Ford. Since then, she has mostly worked as a driving instructor, and stunt driver.

Rebecca (Becky) Arsham - has taken part in at least five seasons of the US Touring Car Championship, usually in a Honda. She has only done part-seasons, and her best championship position was eighth, in 2014, driving a gogogear.com Honda Civic. Much earlier, in 2007, she shared a car with Rich Woo, and earned at least one third place. The pair had raced together in the NASA Pacific Coast Touring Car Championship in 1999 and 2000, finishing second both times. Becky has been active in motorsport since at least 1996, when she was second in the NASA HPR Championship.

Kristina Esposito - races a Mazda Miata (MX5) in the USA. She earned her SCCA license aged 15 and was winning races before her 16th birthday in late 2018. This included a class win at the SCCA Devil in the Dark event, which involved a six-hour solo driving stint in the Miata. In 2018, she took part in the 25 Hours of Thunderhill with an all-female Shift Up Now team. Their car was a BMW E30 from 1990. Kristina and her three team-mates finished in 26th place. She raced in NASA events in 2019.

Taylor Hagler - races in the TC America series, driving a Honda Civic in the TCA class. Her best result so far has been a third place in class at Circuit of the Americas in 2019. She was 15th overall. 2019 is only her second season of racing, having begun in 2018 after ten years of equestrian competition. She raced a Mazda Miata in 2018 and won NASA races in her home state of Texas. She also won at least one SCCA race in the Miata, at Road Atlanta, in early 2019.

Ashton Harrison - races in the Mazda MX-5 Cup in the USA. She was twelfth in the 2017 championship. This was her second attempt at the series, after a part-season in 2016. In 2018, her third season, she was 15th, with three top-ten finishes. The best of these were two ninth places. In a change of direction, she was second in class in the 2019 US Lamborghini Super Trofeo, with six second places and one third. She was sharing the car with Stephanie Cemo. Previously, she raced her MX-5 in SCCA and NASA regional events for two years, and did track days. She is part of a two-car team noticeable by the pink roll cages in their cars.

Roberta Jesberger - raced in the SCCA World Challenge for touring cars in the USA. She raced a Mazda RX-7 during the 1995 season and had a best finish of 17th, at Mosport. She returned to the series in 1996, but made only a few starts. She was racing for “Father and Daughter Racing” with her father, Ron. She does not appear to have raced since then.

Shauna Marinus - raced touring cars in the USA in the early and mid-2000s. She competed in the World Challenge for touring cars between 2000 and 2004. Initially, she raced a BMW 328 and M3, but she used Mazda cars almost exclusively from 2001 onwards. Her best season in the World Challenge was 2002; she was tenth overall, driving a Mazda Protege. As well as touring cars, she tried sportscar racing. She did a couple of races in the Women’s Global GT Challenge in 1999 and 2000, in one of their spec Panoz Esperantes. In 2004, she raced a Mazda RX-8 in at least one round of the Grand-Am Cup. Prior to circuit racing, she did autocross and Solo events. She was the first woman to win an open SCCA Solo title in 1998.

Sarah Montgomery - raced in the Pirelli World Challenge in 2017, driving for Shea Holbrook’s Shea Racing team. Her car was a Honda Civic. In 2018, she joined up with the Sick Sideways team to drive their Audi RS3 TCR car. In a different car, she drove for an all-female Sick Sideways team in the 25 Hours of Thunderhill. Prior to this, Sarah raced a Mazda MX-5 (Miata) from 2011 to 2016. In 2013, she won two championships, the Gulf Coast Racing Series, and the NOLA Region Spec Miata Series. In 2012, she also won the Spec Miata Charity Challenge, a one-hour enduro. Back in the MX-5 in 2019, she became the first female driver to mount the podium in the series, picking up two seconds and two thirds. She was fourth in the championship.

Julie Wilkinson - Canadian driver who raced in the World Challenge touring car series in the 1990s, in the USA. She began in its inaugural season in 1990, in a Subaru. Previously, in 1988, she had been a team-mate to Kat Teasdale in the CASC Player’s/GM Motorsport Series. They both drove Chevrolet Camaros. The year before, she raced a Honda Civic in the CASC Honda/Michelin Challenge Series, with a best finish of fifth, at Westwood. She later became a motorsport journalist and died some time before 1999, when a sports journalism prize was set up in her memory.