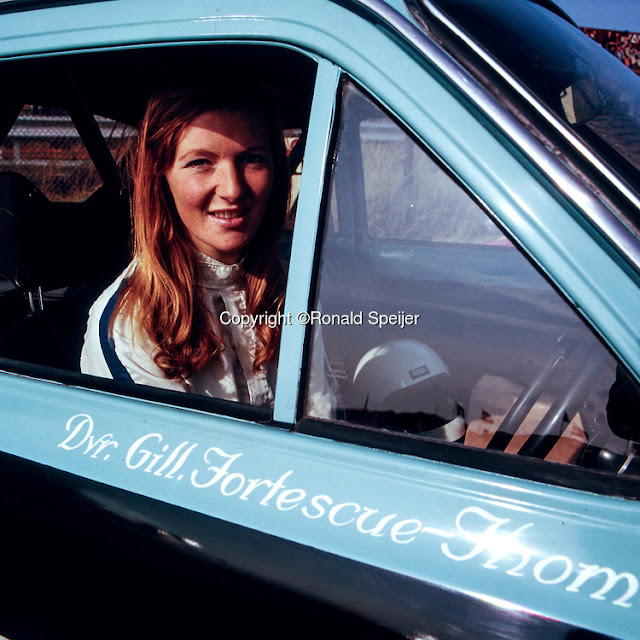 Gillian Fortescue-Thomas (Goldsmith) was active in sports and touring car races in the UK and Europe between 1970 and 1975, then later in historic motorsport.

She rose to prominence in 1971, when she drove in the Ford Escort Mexico series, almost winning a race from Jody Scheckter. This was her second year as a racing driver. In 1970, she had campaigned a Formula 1200 Rejo and won one race at Lydden Hill, despite losing second gear. This car proved too expensive for her to run, as did the TVR Griffith that preceded it.

Ford were using female racing drivers to promote their cars at the time. Their competitions manager, Stuart Turner, had previously capitalised on Pat Moss’s success at BMC as a marketing tool, and was now doing the same at Ford. Gillian entered a driver search for women, organised by Ford. Rallycross featured heavily. She emerged as one of the victors, and earned a drive in the Ford Escort Mexico Challenge.

Through the Mexico series, she became involved with the Shellsport team, which usually used Mexicos. This was run out of Brands Hatch by John and Angela Webb, two more proponents of the publicity value of female racers. Her first major Shellsport event was a “Fast Girls Consul Challenge” at Brands Hatch in 1972. This race supported the Formula 5000 meeting and was highly publicised. Seventeen women took part in Ford Consul GTs. Gillian, as the winner from Jenny Birrell and Micki Vandervell, received a mink coat, presented by Graham Hill.

Gillian also travelled to Spa in 1972, to drive in the 24-Hour race in an Escort. This was one of her semi-works drives that she had won in 1971. Her team-mate was Yvette Fontaine, and they had to retire after a head gasket blew. They had qualified in eleventh spot. The pair had raced against each other in the Consuls, with Yvette finishing fourth.

In 1973, Gillian continued to appear at Shellsport events, including a “Relay Triathlon” at Brands. The traditional swimming leg was replaced by a four-lap race around the track. She was not part of the winning team, although she was one of the leading drivers. At the time, she was a popular figure in British motorsport and appeared in the likes of the Daily Express, jumping over her cars on a horse. She was usually described as a “farmer’s wife”.

At Llandow, she took part in another Ladies’ race, run by the British Women Racing Drivers’ Club. It was a handicap race, and she won in her Mexico.

As a Ford driver, she started the BSCC in an Escort. The engine failed at Brands Hatch. She did most of the rest of the season, although it is unclear whether she was driving for Ford, or her own team. The car was very unreliable, although she did manage a seventh place in the Silverstone GP support race. This was definitely a works entry.

Ford also provided a Mexico for her in the Avon Tour of Britain, as part of a works team that included Roger Clark and Prince Michael of Kent. Her co-driver was Carolyn Faulder.

Later, in 1975, Gillian drove a Triumph Dolomite in BTCC races in the UK. Her car was run by Shellsport again, and she was sixth at Brands in her first appearance. She was then ninth in the very competitive Thruxton race. Her best finish was fourth at Silverstone, just behind her Shellsport team-mate, John Hine.

1975 was her last season for quite a while. She drifted back to her early love, horses, and became a successful amateur jockey, initially in point to point racing. In 1976, she was the first female National Hunt champion jockey.

After one retirement and a marriage, she started competing again as Gillian Goldsmith in the early 1980s. One of her first cars was an HWM-Jaguar.

She returned to the circuits in 1989 in an Aston Martin DB4. Since then, she has appeared at many major historic meetings, including the Goodwood Revival and the Le Mans Classic. She normally drives an Aston Martin, most frequently the DB4.

She still works as an ARDS instructor and races occasionally, as well as supporting her daughter, Samantha, in her own equestrian and motorsport career.

She is still fondly remembered from her BSCC days, when Gerry Marshall nicknamed her “Gillian All-Askew Thomas”.