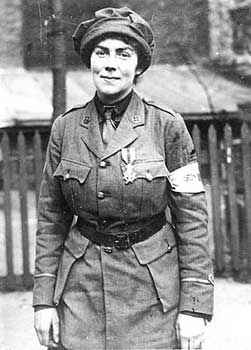 Muriel in her FANY uniform

Muriel Thompson was Brooklands’ first female winner in 1908, when she won the Ladies’ Bracelet Handicap and the Match Race that followed it, defeating Christabel Ellis.

She was a member of the Berkshire Automobile Club from at least 1904. Among her earliest practical motorsport experiences was a run in the club’s Gymkhana in 1904. She drove a Wolseley in a “Legal Limit Race” on a grass track at Hall Place near Maidenhead. She was second overall.

She made another appearance in the Berkshire AC’s Gymkhana in 1905. She was third in the “Bending Race”, a slalom between markers, driving an 18hp Siddeley, belonging to her brother.

Her first motorsport success seems to have been a win in a Blindfold Test at the Berkshire Club’s 1907 Gymkhana. The competitors were required to drive blindfolded towards a flag 75 yards away, from a stationary position facing away from the flag. Muriel got within forty feet of the flag, in 25 seconds.

Her car was an Austin, nicknamed "Pobble", which had belonged to her brother, Oscar, a regular racer. He was a member of the BARC, and as such, was able to enter his car into the first ladies’ event at Brooklands, held in July 1908. Eight ladies entered the Ladies’ Bracelet Handicap, with five making the start. Muriel won comfortably, after the favourite, Christabel Ellis, ran into trouble. Commentators likened Muriel’s upright driving stance to that of “an American jockey”. Shortly afterwards, Muriel and Christabel challenged each other to a match race at Brooklands. Muriel won again.

In 1908, she also went up against Dorothy Levitt in the Aston Hill Climb, driving the Austin. She was eighth overall. Her achievements were reported in Queen magazine.

Opportunities for Muriel to race "Pobble" were quite limited, due to the BARC's ban on women drivers, but she did make some other appearances.

In 1909, she was part of the winning Berkshire Motor Club team in the five-mile Inter-Club Team Trophy, at Brooklands. She was permitted to race due to the meeting being a non-BARC sanctioned event.

The same year, she was appointed by the Women’s Social and Political Union (WSPU) as an official driver. She acted as chauffeur to Emmeline Pankhurst and other prominent suffragettes in the WSPU’s own Austin. She was succeeded as chauffeur by Vera Holme, but was still an active member of the Union in 1912.

In July 1911, at the RAC's Associated Motor Clubs meeting, she won the Declaration Handicap, in the Austin. At the same meeting, she revisited her blind-driving skills, winning another blindfold driving competition.

The following year, she returned to Brooklands for the RAC Associated Clubs meeting once more. She drove Pobble in the Skilful Driving Race. She posted a very fast time in the hillclimb section up the Test Hill, but clipped an obstacle in the reversing section. In yet another blindfold driving competition, she did not live up to her usual high standards and did not stop when she reached the marker.

She later became a decorated war hero, as a WW1 ambulance driver and medic, in the FANY. Among her awards was a British Military Medal, French Croix de Guerre, and from Belgium, the Order of Leopold II and Queen Elisabeth Medal. Muriel commanded convoys and delivered aid to soldiers on the frontline. She took her own Cadillac, named “Kangaroo”, over with her and it was used as an ambulance. Muriel kept a detailed diary throughout the war, which has been useful in piecing together the history of the FANY. Her nickname among her FANY colleagues was “Thompers”.

She continued testing cars occasionally until the 1930s. In 1939, she died of encephalitis lethargica (sleeping sickness), probably contracted during a flu epidemic. She was 65.