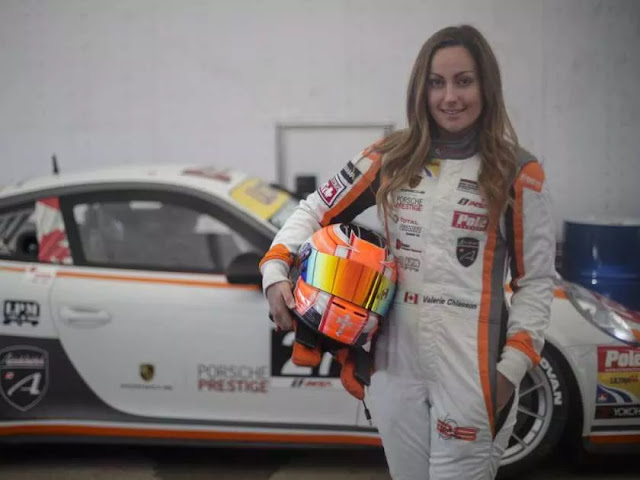 Valérie Chiasson is a Canadian driver who is now based in Luxembourg and racing in Europe.

She began racing in 2007, after five years of karting from age thirteen to eighteen. Her family background is not motorsport-related, but her father encouraged her in karting anyway especially as it kept her from taking up motocross.

She started in the one-make Toyota Echo Cup, and was second in the rookie standings in her first year despite a huge learning curve. She raced the Echo again in 2008, although she did not run a full season.

In 2009, she moved into the American Canadian Tour series, a stock car championship. She was 19th overall in her Chevrolet Impala, and second in the Rookie championship.

She continued to compete, on and off, until 2012, when she left the motorsport world for a year to concentrate on her other sporting interest: equestrianism. She entered the 2013 Canada Games in dressage.

In 2013, she started planning a comeback, and funding for a part-season in the 2014 Canadian Touring Car Championship was available. She joined the Lombardi Honda team for four races in their Civic, and was fourth and fifth at Montreal and tenth at Trois-Riviéres. One of these races was a Grand Prix support race; she became the first woman to take a (class) podium position at the Grand Prix meeting.

She intended to carry on part-time in 2015 and did continue to race, although in the one-make Nissan Micra Cup rather than the CTCC. Her final position was sixth overall, with one podium finish. She was second in the ladies’ standings, behind Valérie Limoges.

In 2016, she raced both the Micra and a Porsche 911. Her sponsor for the Micra Cup, Nissan Gabriel, was able to arrange her Porsche seat. The Porsche was the better car for her, and she was eighth in the Canadian Porsche GT3 championship. Her best finish was sixth, which she earned three times at Bowmanville and Montreal.

She was eighteenth in the Micra Cup. This was only a part-season. She managed three top-tens in the early part of the year.

At the end of 2016, she was elected Canada’s representative to the FIA Women in Motorsport Council.

Shortly afterwards, her career went international. Valérie began dividing her time between Canada and Luxembourg. She signed up for the Canadian and Benelux Porsche GT3 Cup Challenge series. She ran better in Canada, earning two runner-up spots at Montreal during a guest spot. Her best result in the Benelux series was a twelfth place at Zandvoort. Her programme was a part-season, and she was 24th in the championship.

Away from the track, Valérie has business interests in both Canada and Luxembourg. She has her own automotive marketing company and collaborates with others.