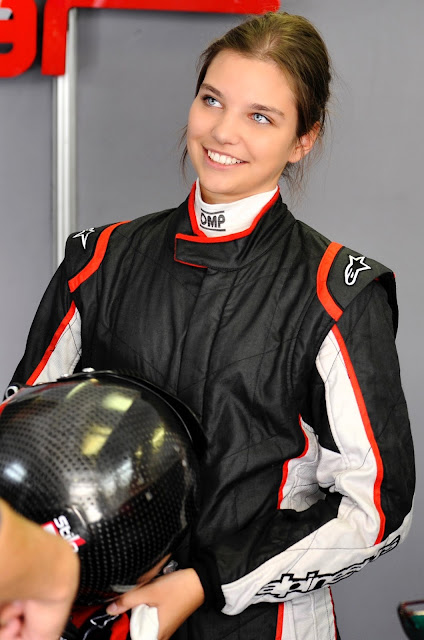 Vivien Keszthelyi is a Hungarian driver who had her first senior races in 2014, aged only thirteen. She was competing in the Suzuki Swift Cup in Central and Eastern Europe.

Her best result was second, achieved at the Panonniaring and her home race at the Hungaroring. She finished in the top ten in all races she finished, and was on the podium in the Junior class every time. Her overall position at the end of the year was sixth. An outing in the Austrian Suzuki Cup gave her a fourth place. This was all despite having almost no prior motorsport experience. She had not been a junior karter in any serious way and only attended her first motor race a year earlier. Having said that, her parents liked cars, and she got an electric jeep for an early birthday.

In 2015, she returned to the RCM Swift Cup, and was a much stronger driver, despite a shaky start. Her first race ended in eleventh place, the first finish outside the top ten of her career. She scored her first win at the Pannoniaring, one of two this season. She was second three times, at the Hungaroring and the Slovakiaring. At the Hungaroring, she was also third in a multi-marque endurance race, driving solo in the Swift.

Always adding to her experience, she entered a couple of rounds of the Central European Touring Car Championship in Slovakia, in the same car. She was fifteenth and ninth, third and second in class.

In 2016, she raced an Audi TT Cup car in the Hungarian touring car championship. She was among the leading drivers, and won five races, mostly the sprints. The first of these wins was at Brno, where she won two in a row, with two fastest laps. Later in the season, at the Hungaroring, she won another three races at the same meeting. This gave her the Hungarian Touring Car and CEZ Endurance titles.

She stayed with the TT Cup car in 2017, but took a further step up into the Audi TT Cup in Europe. She is now a member of the Audi Sport Academy and receiving professional coaching from Pierre Kaffer. She was still only sixteen at the start of the season, having had to wait for a year to be allowed to start in the series.

Her season began badly, with a non-start in the first race, then a non-finish in the second. She was struggling without her race engineer, who had been in hospital, then had the embarrassing experience of sliding off during the parade lap and damaging her car. It was patched up for race two, but tyre problems intervened. Things got worse at the Nürburgring; she was caught up in a Fabian Vettel’s crash on the first lap, hit the wall, and spent the next two days in intensive care.

At the Norisring, she had recovered sufficiently to take part, and was rewarded with her first points finish, an eighth place. It was one of four top-tens she achieved that year. She was thirteenth in the championship.

In 2018 she contested the Audi Sport Seyffarth R8 LMS Cup, finishing second in the championship. She was third twice in the opening races at Hockenheim and second at the Hungaroring.

Her project for 2019 is a move into single-seaters. She entered the Asian F3 Winter Series at the end of 2018 with BlackArts Racing, and got into the second round of qualifying for the W Series all-female F3 championship. She was eventually selected as a reserve driver and contested four of the six rounds, with a best finish of tenth at Misano.

She was thirteenth in the Asian F3 series, one place behind her team-mate Charles Leong. The first race of the season gave her her best finish: eighth at Buriram in Thailand.

Vivien appears to be working with Audi again in 2020.

Her aim is to race in the DTM or the WEC.