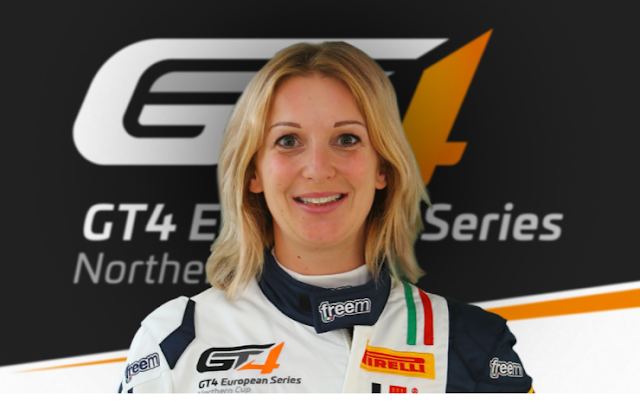 Manuela Gostner raced in the 2017 European GT4 Championship, driving a Maserati. She is best known for driving a Ferrari. Unusually, she was almost 30 when she started competing.

She is the elder sister of Corinna Gostner, who races in the Coppa Shell Ferrari Challenge with Manuela and their father, Thomas. Their brother, David, also races. It was he who encouraged Manuela to take the wheel of his Ferrari at a test day in 2014.

She started racing only a few months later, at Brno. Her sister Corinna made her debut at the same time. Corinna finished just above Manuela in the first race, in tenth, and they swapped places for the second. Manuela returned for the season finale in Abu Dhabi. She was 20th in the championship.

In 2015, she enjoyed a bigger racing programme and contested the entire Coppa Shell Ferrari Challenge. Her car was a Ferrari 458 run by Ineco-MP Racing, who ran her in her first races. She started slowly but soon learned the car. By the third round at Mugello, she was into the top ten. In September, she broke into the top five for the first time, at Imola, and repeated this at Valencia. She was twelfth in the championship.

In 2016, she raced both with and against Corinna: in the Ferrari Challenge, she was not quite as competitive, earning two top tens, the best of these being a ninth at Monza. She finished 21st overall. She and her sister shared the Ferrari in two Italian GT Championship rounds at Mugello, and were eighth and sixth in the GT Cup class. They were racing against their brother and father in another MP Racing Ferrari.

She made a move into the European GT4 championship in 2017. Her Maserati Gran Turismo  MC was run by Villorba Corse. She was third in the Am category, just in front of her Villorba team-mates, Romy Dall’Antonia and Giuseppe Fascicola. She won her class at Brands Hatch and Zandvoort and was third at the Red Bull Ring.

The Coppa Shell had not been forgotten. Back with the Ineco-MP team, she did most of the European Ferrari Challenge, and had a best finish of sixth at Paul Ricard. She was also sixth in the World Final at Mugello.

She was third in the 2018 Ferrari Challenge, winning races at Catalunya and Monza. Monza was also the scene of her third place in the World Finals. Away from the Ferrari Challenge, she raced a 488 for Kessel Racing in some bigger races. In October, she was fourth in the GT3 class in the Michelin Le Mans Cup at the Algarve circuit, sharing with Giorgio Sernagiotto. In December, she was part of an all-female team for the Gulf 12 Hours, alongside Michelle Gatting and Rahel Frey. They were second in class and sixth overall.

Her GT4 success has earned her a first FIA driver classification of Bronze. The Kessel team recruited Manuela and her Gulf 12 Hours team-mates for a campaign in the 2019 European Le Mans Series. The three women raced as the "Iron Dames" and became the first all-female team at Le Mans itself for almost ten years. They finished 38th overall and ninth in the GTE Am class, ahead of their all-male "sister" car.

In the wider ELMS series, Manuela and her team-mates had their fair share of car problems, but they still managed class second places at Silverstone and Paul Ricard, on their way to fourth in their class championship.

The Iron Dames got back together for the 2019 Gulf 12 Hours and were running in a strong fourth place when contact with a backmarker caused their retirement.

Away from the circuits, she competed internationally at both indoor and beach volleyball before having her two daughters.