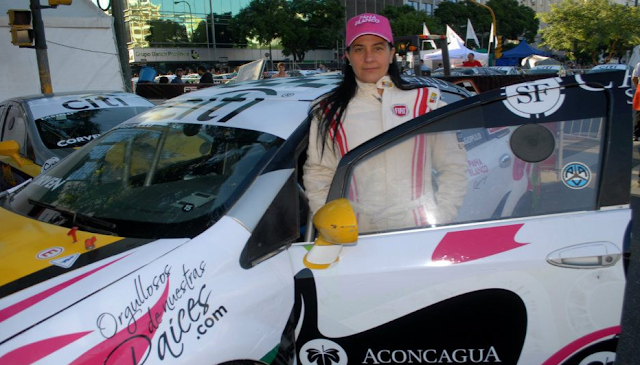 Marisa Panagopulo is an Argentine driver, active since the 1990s.

Marisa’s early forays into motorsport were in karting and midget racing. She did race karts extensively from the age of about fourteen, sometimes with her brother, Carlos. It took a while for her to be able to move up to cars; she was still karting as a senior in 1986, when she was 18.

She seems to have started her senior career in 1994, in a Nissan Sentra, which she raced in the Copa Damas. This was a one-make series for female drivers, which was shown on television. She won the 1994 championship.

In 1995, she was part of Formula Hyundai Femenina, another touring car championship for female drivers. Her second year in cars gave her another winner’s trophy.

Her first appearance in the leading TC series was the 2 Hours of Buenos Aires in 1996. She shared a Ford Falcon with José Larroudé and finished 16th. This was the first of three races that she did in the Falcon, and her best finish. In a different car, a TTE prototype supported by Citroen, she made her debut in the Mil Milhas at Interlagos. Her team-mates were Delfina Frers and Suzane Carvalho. They do not seem to have finished.

That year, she also raced a Citroen AX and a Volkswagen Gol in one-make series. She appears to have won at least one race in the AX.

After that, she took a break from motor racing, partly due to finances. During her time away, she became a mother.

She returned to karting for many years, in order to satisfy her competitive urges.

Marisa made a circuit comeback in 2012. With Delfina Frers, Lorena Blanco and Carolina Eiras, she was part of an all-female team for the Fiat Linea Cup. She was ninth in the Rosario race.

Since then, she has returned to competitive karting, and made a guest appearance in the ASM Championship in 2014. She was driving a Fiat Uno. She also dabbles in historic racing.