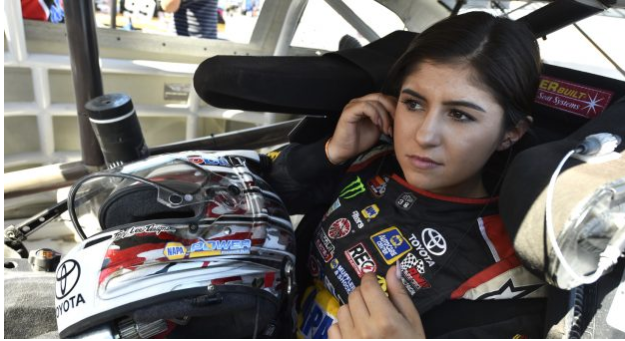 Hailie Deegan is the first female driver to win a race in the K&N Pro Series.

Hailie, born in 2001, only began racing seriously in 2017. She finished two CARS Super Late Model Tour events and was unspectacular, if reliable. Her career only really got started in 2018, when she signed up for a full season in the K&N Pro Series West, driving Bill McAnally’s Toyota. She was still only 16. In her early teens, she had been a successful off-road racer with junior titles to her name.

Her season began with a promising seventh place at Bakersfield, then it wasn’t long before the “firsts” began to stack up. She earned her first top-five finish two months later, coming in fourth at Orange Show and then fifth at Colorado. Her first pole position was at Las Vegas Motor Speedway Dirt Track; she finished second. However, her next race, at Meridian, yielded her first win, from fourth on the grid. Before the end of the season, she had racked up another pole at Bakersfield and two top-ten finishes.

As well as the Western Pro Series, she did some rounds of the Eastern championship. This was far less successful, beginning with a non-finish at Smyrna due to electrical problems and ending with crashes at Iowa and Gateway. In between, she managed a best finish of thirteenth at Memphis.

Away from championship races, she won a heat of the 2018 Star Nursery series at Las Vegas. A second attempt at the Star Nursery in February 2019 led to a fourth place, from pole.

2019 started with the first race of the Pro Series East championship, at New Smyrna. Again, Hailie had to retire her Toyota with electrical problems. Back in the West series at her favoured Vegas track, she earned another win after a last-lap dash to the front. She had started from eighth on the grid. She won again at Colorado, from fourth, and was second at Roseville from pole. In all, she scored six podiums during the season and was third in the championship.

Her part-season in the Pro Series West was not as stellar, often due to non-finishes. She started with a pole at Smyrna, but could only finish 16th after electrical problems. She was ninth at Bristol and Gateway, her best Western results of the year.

(Image from https://hometracks.nascar.com)
Posted by Rachel H-G at 14:06