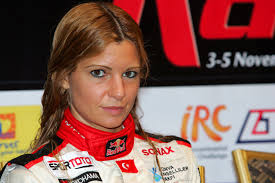 Burcu Çetinkaya is a Turkish driver who has competed in Europe, and in the WRC.

She began her rally career in 2005, after several years of representing Turkey in snowboarding competitions. Her first car was a Fiat Palio, and her first rally, the Hittite Rally, in which she was 45th, ninth in class. Not long afterwards, she entered the Fiat Rally, an ERC round, and was 23rd overall. This was her best result of the year.

After her first European championship rally in 2005, she entered her first World Championship event in 2006. She drove in the Rally of Turkey, and was 50th overall, driving a Ford Fiesta. Another run in the Fiat Rally gave her a 21st place, and she performed strongly in the Istanbul Castrol Rallysprint events, earning a ninth an eighth place. This year, she won her first Turkish ladies’ championship.

The Fiesta would prove to be her regular car for several seasons. In 2007, she kept expanding her horizons, and entered her first overseas rallies. She took part in four rounds of the Belgian championship, taking in classic events like the Ypres-Westhoek and Condroz-Huy rallies. She ran quite well in the Haspengouw Rally, and was 28th overall. Mid-season, she travelled to the Czech Republic for the Barum Rally, and was 43rd, with a class second. Her season finale was a second WRC round, the Wales Rally GB, in which she was 63rd. In between, she still played an active part in her domestic championship, and won a second Turkish Ladies’ Cup. Her best events were the Istanbul and Yeşil Bursa rallies, in which she was fifteenth.

Her involvement with Ford deepened in 2008, when she entered the Fiesta Castrol Sporting Trophy, supported by Castrol Ford Team Turkey. Her WRC programme expanded to six rounds: Italy (Sardinia), Turkey, Finland, Germany, Spain and Great Britain. She finished all six. Predictably, the Rally of Turkey was her best event, and she won her class. She was 25th overall. Away from home, she continued to enter Belgian rallies, with mixed results, the best of these being a 31st place in the Rallye de Wallonie. At home, she achieved her first top-ten finish, a tenth place in the Yeşil Bursa Rally, with a class win. Another class win in the Istanbul Rally was very welcome, and helped her to twelfth in the Turkish championship, and a Class N3 title. The only real bad point of 2008 was a spectacular crash in the Ypres Rally, in Belgium.

At the end of 2008, Burcu experimented with other cars, and drove a Mitsubishi Lancer in the Istanbul rallysprints. The beginning of 2009 saw her continue to experiment, with a Fiat Abarth Grand Punto. She guested in the Italian championship, entering the Rally Adriatico with none other than Fabrizia Pons, the former co-driver of Michele Mouton. They were 39th overall. Later in the season, Burcu returned to Italy for the Azzano Rally, on gravel, but in a Peugeot 207 this time. She was 17th, with her usual navigator, Cicek Güney.

Despite the new cars, the Fiesta remained her main mount, and she had a second try at some of the Fiesta Sporting Trophy rounds. Poland was her best outing in the WRC, and she was 28th, fifth in class. She retired from the RACC Rally Spain, and finished in the forties in the UK and Finland. It was in the Turkish championship that she really found her feet, with four top-ten finishes: fifth in the Kocaeli Rally, eighth in the Hittite Rally, seventh in the Istanbul Rally and ninth in the Ege Rally. Two of these were also class wins.

For 2010, she switched allegiance from Ford to Peugeot, and drove for the Peugeot Turkey team in a Super 2000-spec 207. Her schedule was a mix of WRC and IRC events, beginning with the Rally of Turkey in April. She was a career-best twelfth. Retirements from the Sardinia and Ypres Rallies followed, then a 19th place in the Rally Vinho Madeira. Her second WRC event, Germany, ended in another retirement, before indifferent finishes in the Barum and Sanremo Rallies. Her best result of the year was in the Scottish Rally, where she was eighth, getting herself onto the IRC points leaderboard, in 37th place. Her last IRC rally was Cyprus, in which she was fifteenth.

In 2011, she tried three different cars: an S2000 Fiat Punto and Skoda Fabia, and a Mitsubishi Lancer Evo IX. At the start of the year, she used the Fiat in Turkish rallies. She retired from the Bosphorus and Kocaeli rallies, but was eighth in the Istanbul Rally. Her first event in the Skoda was a second visit to the Scottish Rally, but this too ended in retirement. After that, her schedule was centred around the Eastern Mediterranean and the Middle East, as opposed to Europe, as in previous years. She did two more events in the Skoda, the Cyprus and Hittite rallies, finishing 17th in Cyprus and fifth in the Hittite Rally. Moving on to a new “playing field” and a bigger car, she was fifth in the Dubai Rally, and third in a round of the Qatar championship.

Her season in 2013 was quite similar, although she only finished on the podium once in Qatar, and was seventh in the championship. In the MERC, she was eleventh in Kuwait and fourteenth in Jordan, but retired from the Dubai Rally.

She did not compete in 2014, instead returning to her studies, moving to a new area and embracing religion.

In 2015, she returned to the Turkish championship, which was now the home of a few other female drivers. Her best result was ninth, in the North Cyprus Rally, and she was also tenth in the Kocaeli and Çanakkale rallies. Her car was still the Group N Mitsubishi.

She took another year out in 2016, but returned to the Turkish championship in 2017. Initially, she drove the Lancer. She only recorded one finish in it, then it caught fire on the Troia Rally. It was replaced by a Ford Fiesta. This car was more reliable. She picked up one top-twenty finish in it, a 14th place in the Kocaeli Rally.

In 2018, she entered Rally Turkey with Inessa Tushkanova as her co-driver. They were 31st in the main event and sixth in the National rally, driving a Ford Fiesta.

Between 2008 and 2010, Burcu was the highest-ranked female rally driver in the world. As well as her motorsport activities, she also works as a presenter on Turkish television.