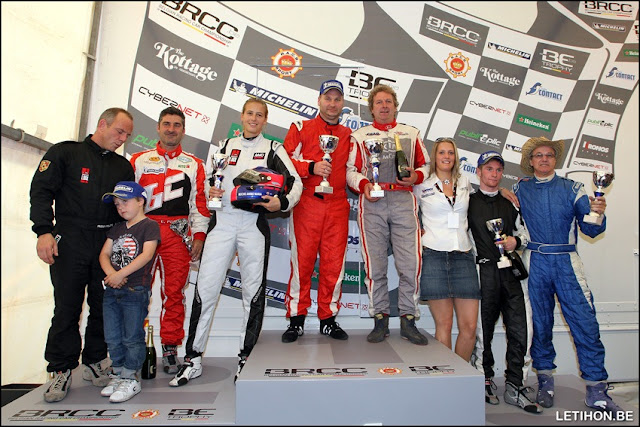 
Sarah Bovy is a Belgian driver who competes in Europe, and is based in Belgium.

She started her senior motorsport career in 2004, in the Formula Renault Academy. She was just fifteen years old, and reached the final on her first attempt. The following year, she joined the Belgian Formula Renault 1.6 championship, and scored two podiums. She was driving for Thierry Boutsen’s team. Sadly, her funding ran out after only three races.

Although she had showed promise in single-seaters, it was saloon cars that she initially gravitated towards. Her first Spa 12 Hours was in 2006, and she was 18th in a Renault Clio. She also took part in the 10h Zolder race and the BTCS 25 Hours in the Clio, as part of a multi-driver team. For the 12 Hour event, she was a guest driver in the Speed Action team. This was after another guest spot in the Belgian Legends championship, which gave Sarah a win. At the end of the season, she was named as the Belgian female driver of the year.

In 2007, she took a step up, and moved into international sportscar competition. She drove a Gillet Vertigo Streiff for Belgian Racing. Sharing with the experienced Renaud Kuppens, she was 34th in the Spa 12 Hours. The pair were joined by Bas Leinders for the Spa 24 Hours, but did not finish. Sarah was 18 years old, and one of the youngest people to have driven a sportscar on the Spa circuit. She had also only just passed her road driving test.

For the next two seasons, she undertook testing and development work in a variety of different cars, supported by Gravity Sport Management. She did not do any competitive racing.

At the start of 2010, Sarah was back in a sportscar, driving a Porsche 996 in the first round of the Belcar championship, at Zolder. She and her team-mate, “Brody”, were 26th. She tried to qualify the Porsche for the Spa 24 Hours, but could not manage. Later, she returned to the Belgian Touring Car Championship (BTCS) and drove a Mitsubishi Lancer for the first time. She did two races with Jean-Pierre de Wauwer, and was 18th in the championship after one podium finish. Her BTCS programme included the Spa 12 Hours, and she was seventh. Round-the-clock enduros were something of a theme for 2010, as she also raced in the VW Fun Cup 25 Hours, held at Spa.

In 2011, she was meant to race a Ginetta for JHR Developments in the British GT Championship, but the deal fell through. Instead, she carried on with development work for Formula 3. For the past couple of seasons, she had spent time helping to develop a number of cars. For a change, she competed in the Rally Televie in a Porsche Cayman, and towards the end of the year, she was one of the finalists for the FIA Women in Motorsport Scirocco-R Shootout. She did not win the Scirocco Cup prize drive.

In 2012, it was back to sportscars, and she drove a McLaren MP4-12C in the Spa 24 Hours with Boutson Ginion Racing. The team consisted of Sarah, Marlène Broggi, Jérôme Thiry and Massimo Vignali. They did not finish. For the rest of the year, she was involved in the BRCC series, in a GC10 V8 BMW. She was second in her class of the Long Races championship, as part of a rotating squad of drivers for the GC team.

In 2013, she raced the GC10 in the Dutch GT championship, finishing eighth in one race at Spa and fifth in another. She was twelfth overall in the BRCC Long Race category, with two class wins, and won the Silhouette ProEvo class. She also became the first woman to race an Aston Martin Vantage GT3, in the Spa 24 Hours, but she did not finish.

In 2014, the Long Race series was dropped, and she did not take part in the BRCC.

2015 was mostly spent in the Renault Sport Trophy. She drove a Renault RS in some races at Spa. She was third in a Prestige (sprint) race, and fourth in an Endurance race. Her team-mate was Michela Cerruti. Away from Renault, she drove a works-supported Peugeot 208 in the Hankook 24h Series, for Team Altran. She raced at Mugello and Brno. The Brno 12 Hours gave her a class win, and 14th overall, driving in a team of three. A different team, including Sarah, did not quite get to the end of the Mugello race.

She did some more endurance racing in a Peugeot 208 in 2016. At the start of the season, she contested the Dubai 24 Hours, but did not finish due to mechanical issues. She had more luck in the Silverstone 24 Hours, where she was fourth overall, with a class win. Her team was Altran Peugeot, and she was part of a five-driver squad.

Most of her season was spent racing a Lamborghini Huracan in the European Lamborghini Super Trofeo. She was fourteenth in the Pro-Am class, and her best race result was thirteenth, at Spa.

She raced the Huracan again in 2017, entering the Spa 24 Hours, which ran as a round of the Blancpain GT Series. She was sixth in the Amateur class.

The Huracan came out again for the 2018 Spa 2 Hours. Sarah and her three team-mates were second in the Group N class, 47th overall.

In 2019, she is part of a revolving cast of female drivers in an R24-run Ligier LMP3 in the Asian Le Mans Series. She and Stephane Kox were seventh at Shanghai in January.

The 2019 summer season was spent as part of the all-female W Series. Sarah was chosen as a driver but only as a reserve, so she only made two starts. She was meant to start her home Zolder race as it was her birthday, but her car caught fire on the startline. She is unlikely to be involved with W Series in 2020.

She is the daughter of Quirin Bovy, who raced touring cars in Europe in the 1970s and 1980s.