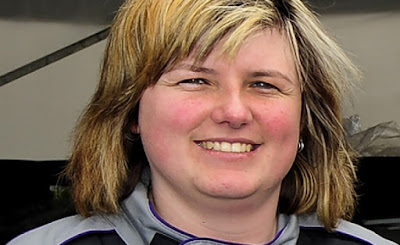 Christina Orr, of New Zealand, is mostly known as a single-seater specialist. A precocious talent, she raced karts from an early age, and Formula First at twelve. This made her the youngest person to race a single-seater in competition. Not only that, but she was on the podium too. She was fourteenth in the championship.

The next year, in 2002, she was second in the New Zealand Formula First championship. During that year’s winter season, she moved up to Formula Ford, and won a “Rookie of the Series” award.

Her first full season of Formula Ford began in late 2002, and she was ninth overall, after a part-season. The following year, she was sixth, racing against the likes of Brendon Hartley and Charlie Kimball. She finished on the podium once.

Her 2003 season was marred by tragedy, as she was involved in an accident in which a fellow Formula Ford racer, Michael McHugh, was killed. A lengthy inquest followed, but Christina was later absolved from blame, despite the protestations of McHugh’s family.

Putting 2003 behind her, 2004 saw her first international events – two races in the Australian Drivers’ Championship. Later, it was back to the NZ Formula Ford championship. Christina kept improving gradually, and was fifth at the end of the season. She scored two podium places, and two fastest laps.

In 2006, she moved up to Formula Toyota, New Zealand’s top-level domestic single-seater series. She was seventh in the winter series, before the main 2006-07 season started. Although she was not able to get another podium place, she did well in the championship, and was fifth overall.

2007 was a quiet year. She travelled to Australia, for the Bathurst 12 Hours, as part of an all-girl driving squad with Samantha Reid, Lauren Gray and Leanne Tander. They drove a Holden Astra, but did not finish.

Her next Formula Toyota season was 2008. This was something of a mixed year, with her best finishes being two fifth places at Manfeild. For the most part, she finished in the top ten, and was eighth overall.

The same year, she also entered four Indy Lights races in the USA. Her long-term goal was now a race seat in one of the American oval series. Out of her four races, she finished three times, and  had a best result of 16th, at Chicagoland. She hoped this would lead to more Stateside opportunities, but sponsorship was not forthcoming.

Most of 2009 was rather quiet for Christina. She did make one major appearance in Australia, in the Bathurst 12 Hours. She was part of a second all-female team, with Molly Taylor and Heather Spurle. They drove a Subaru Impreza, and were 27th overall, second in class.

After almost a year's lay-off, she returned to motorsport for the 2009-10 southern hemisphere season, driving a Holden Commodore saloon in New Zealand. She entered the BNTV8 and NZV8 series, in a self-entered car. Her best finish in BTV8s was eleventh, at Teretonga, and she was 22nd overall. She was 14th in the NZV8 Hamilton 400 Trophy.

A second season in the BNTV8 series in 2010-2011 panned out in a similar fashion. She drove a Commodore, and had a best finish of twelfth, at Taupo, and she was 20th in the championship.

A break from motorsport followed, during which Christina became a mother.

She returned to New Zealand in 2014, to race Utes. She signed up for the SsangYong Actyon Ute Racing Championship, one of five female drivers to do so. Despite her long lay-off, she was quickly on the pace, and became one of the series’ leading drivers. She won two races, and finished on the podium in four more. Her final championship position was third.

Christina raced Utes again for the 2015-2016 season, but was not quite as quick, and did not make it to the series podium at the end of the year.

However, her third Ssangyong Utes season got off to a fast start, with one win at Taupo at the second meeting of the year. She won again in the last meeting at Pukehohe. In addition, she picked up nine podium positions, three poles and two fastest laps. She was third overall.

She was third again in the 2017-18 Utes championship and signed up again for the 2019-20 season. In addition to the Ute, Christina also started racing an Audi R8 in the NZ Endurance Series, sharing the car with Ben Byers. The pair have scored one third and one fourth place.