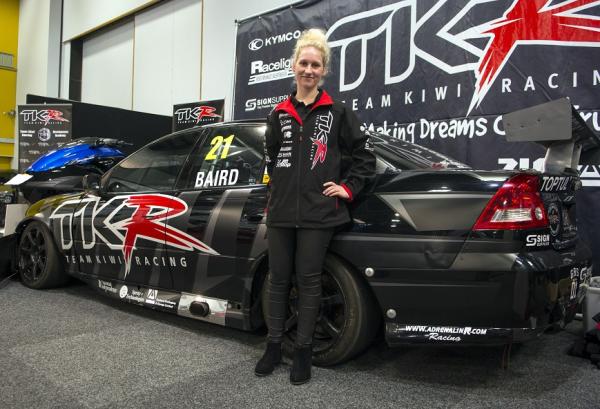 New Zealand female drivers have competed in both touring cars and Ute racing in recent years, both at home, and in Australia. For the earliest female racers from New Zealand, click here. Chelsea Herbert now has her own post.

Jessica Antonievic – raced in the SsangYong Actyon Ute Racing Series in the 2014-2015 season. This was her first season of motorsport. She was 39th in the championship, after finishing all of her races. She works as an administration manager for SsangYong, and has had racing ambitions for some time. She was recruited for the series partly to increase its diversity. She did a second season of Utes in 2015-16, and usually finished, if near the back. Her third year in a Ute was a part-season, mostly the later races.

Stef Baigent – raced in the SsangYong Actyon Ute Racing Series in 2014-2015. She was 41st in the championship, after scoring points in two of her races. In 2015, she returned to the series. She is the daughter of Kent Baigent, an NZ touring car racer, and the two of them have occasionally competed together in endurance events, driving a BMW M135. The father-daughter team was still in action in 2017.


Sheridan Broadbent - races in the SsangYong Ute series in New Zealand. She is part of the Race 4-D Cup team which races in support of breast cancer charities. The team is all-female and was started by Bronwynne Leech. Sheridan’s first season in Utes was 2016-2017, and she was 34th overall, with a best finish of 24th at Hampton Downs. She finished 28th in the 2017-18 championship. She also races historics, including a Ford Cortina.

Debbie Chapman – twice a participant in major Bathurst races. In 1999, she was tenth in the Bathurst 500, driving a BMW 320i. In 2002, she drove a BMW 318i in the Bathurst 24 Hours, but did not finish. She raced alongside her husband, Dennis. They were recognised for ten years of service to New Zealand motorsport in 2004. After that, she has remained active in endurance racing in New Zealand. In 2006, she and Dennis were still racing a 318i, and were still competitive. Two years later, Debbie was still competing in endurance racing, and was also nominated for the Lupp Award, which goes to a driver involved in historics.

Alyssa Clapperton – had her debut season of New Zealand V8 Touring Cars in 2015. She drove a Holden Commodore for Team Kiwi Racing, partnering Craig Baird, after being chosen from 2000 hopefuls for a TKR Academy race seat. As well as NZV8s, she did some guest races in the SsangYong Actyon Ute Racing Series. During the 2015-16 season, she raced in BNT NZ Touring Cars, in a Team Kiwi Commodore again. Despite missing some races, she was fifth overall, with a best finish of fourth, at Manfeild and Hampton Downs. She also made some guest appearances in Aussie Racing Cars, driving for Team New Zealand. 2017 was a shortened season for her. She raced in NZ Touring Cars in a Ford Falcon, and then the Cheapies Under $4000 series in a Toyota. She began racing in 2012, in local club races, in a Toyota Starlet. In 2013, she competed with her father, Ian, driving a Holden Commodore in endurance races.

Tessa Field - races in the Ssangyong Actyon Ute series in New Zealand. The 2017-18 championship was her first year of racing a Ute. She is a reliable finisher, if not yet quite on the pace. Her best finish has been 23rd, at Bruce McLaren Motorsport Park. During the Southern Hemisphere summer, she raced a Honda Civic in the Mitre 10 Mega Summer Series and won one race, at Taupo. In 2018, she raced the Honda in the SF Cup Winter Series, securing at least one podium.

Amanda West - races in the Ssangyong Actyon Ute championship. 2017 appears to have been her first year of competition. She found Utes rather hard-going to start with, and had to contend with some technical problems, including gearbox issues. Her season ended with 27th in the championship. She also raced a Mazda RX8 in the IRC Summer Series the year before, and scored at least one third place.