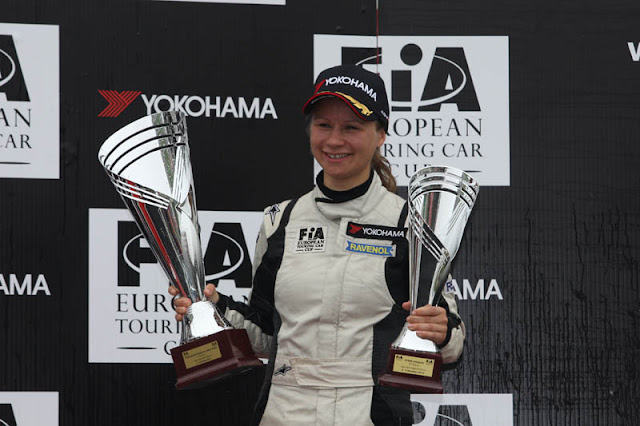 Ulrike Krafft is a German driver who has been competing in the ETCC since 2011.

She began at the age of 20, in slaloms in 2004, winning her first title in 2005, driving an Opel Corsa. This was her first experience of any kind of motorsport, and she showed flair and competitiveness very early on.

Her first circuit races were in 2006, in the Dacia Logan Cup in Germany. Her best finishes were three fifth places. She did these alongside slaloms, in which she was still highly competitive, finishing second in her club’s championships for young drivers and allcomers.

She carried on in the Logan Cup in 2007, and performed well enough to win her club’s racing championship. Her season started very well, with a win at Oschersleben, but a series of technical problems later on put her and her team-mates out of the running.

2008 was a similar story. Ulrike and her team-mate, Henrik Stoldt, were very competitive, and even led the championship, until the final round. A lost wheel and other mechanical problems lost them the title. They were awarded the “Fairness Cup” as a consolation, for their sportsmanship.

The following year was a quiet one for Ulrike. Her ADAC Hansa team only entered one round of the Logan Cup, in which Ulrike was fourth. She spent much of the rest of the year concentrating on her university studies. She qualified in engineering, after studying in Hamburg and France, and earning herself a job with Bosch.

Following her graduation, she returned to motorsport, and moved up to the ADAC Procar series.  She was with the ATM Ladies team, driving a Ford Fiesta in Division II. She was fifth in the division, with a best finish of second, at Hockenheim, one of three podium places. The team consisted of three female drivers: Ulrike, Saskia Müller and Stephanie Neitzel, who also managed the team.

In 2010, she also tried rallying, in a Dacia Logan, both as a driver and co-driver. Driving, she entered the Niedersachsen Rally, but did not finish. Her navigator was Katharina Wüstenhagen. As a co-driver, she was also unsuccessful, scoring a DNF in the Ostsee Rally with Pierre Humbert.

On the circuits, she held position in 2011, finishing fifth despite a slightly shortened season, with two second places at Oschersleben and Sachsenring, and a third at the Sachsenring. Sadly, a technical problem with the Fiesta, which began with a DNF at Zolder, put her out of four races. She also made her debut appearance in the ETCC, which was a two-round meeting at Salzburg. She was second in class for her two races, driving the Fiesta.

In 2012, she moved into the ETCC full-time, in the S1600 class, driving a different Fiesta, run by the Ravenol team. The championship had now expanded to four rounds. She was third in the S1600 championship, with a best finish of second, at Monza, plus third places at Imola, Salzburg and the Slovakiaring.

She contested the ETCC again in 2013, which was run over ten races, in five rounds. She was quite successful, winning her class once at Pergusa, and finishing third on six occasions. Her overall result was third in the Super 1600 class, in the Fiesta. However, she lost her Ladies' crown to Andrina Gugger, who was racing in the more powerful Super 2000 class.

In 2014, she came back to the ETCC, still in the Fiesta. She was a leading player in the S1600 class again, with five wins, from five pole positions. She was second in the S1600 standings, and would have won, had she not suffered two non-finishes at Zolder, where she started from pole. An official Ladies’ Trophy was awarded this year, and Ulrike won it easily, from Ksenya Niks and Andrina Gugger.

2015 was not quite as successful a season as 2014, but Ulrike was still one of the drivers to beat in S1600, in her Fiesta. She won one race, at the Slovakiaring, having started from pole. She earned a second pole position at Pergusa, at the end of the season, but could only convert it to a win in the second race. She was third overall.

The Super 1600 class was more competitive in 2016, and Ulrike missed several rounds of the championship. Despite a win at the Slovakiaring and a second and third place, she was seventh overall in her Fiesta. She also did some historic racing while she was away from the ETCC.

Ulrike’s long-term aim is to race in the WTCC.