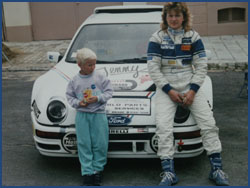 Jenny van Hilten is most famous for racing a Group B-spec Ford RS200 in Europe in the late 1980s. She is from Luxembourg, and did most of her racing in the Netherlands.

Jenny and her husband Bram bought the RS200 in 1987. It had been used as a pace car by the factory previously.

One of her most memorable races was at Zandvoort in 1988, when she entered the NTK (Dutch Touring Car) round there. After making the most of her four-wheel-drive in the wet in the Group A Super Touring race, she was fourth overall. This was her only NTK race of the year.

That year, she also drove  an RS500 in the Spa 24 Hours, with Evert Bolderheij and Bernard Winderickx. They did not finish.

She did another 24-hour race in 1988, driving a Honda Civic at the Nürburgring 24h as part of a Luxembourgish team. Her co-drivers were Carlo Gillen and “Lou”.

Jenny, driving with her husband Bram van Hilten this time, and a driver called Phillips, returned to Spa in 1989, in the Honda Civic. They were 38th overall.

That year, she made another appearance in Dutch touring cars, driving a Ford Fiesta XR2. Bram had made some appearances in the car earlier in the season and Jenny ran in the final round at Zandvoort. She was second in class in the Group A race, behind Bram in another XR2.

In 1990, she competed in the Citroen AX GTI Cup, and managed some top-five positions. She was noted for her pace in qualifying. Mid-season, she was third in the overall standings, second in the Ladies’.

The following year, she opted for another one-make series: the Ford Fiesta Mixed Cup, which was based in Germany. She was already familiar with the XR2s used by the series. Her male team-mate was Thomas Wirtz, a German driver. The series that year was dominated by Sabine Schmitz/Thomas Marschall and Claudia Hürtgen/Michael Funke. As a pair, Jenny and Thomas were not among the front-runners, although Jenny was sixth in the women’s points table.

The van Hilten/Wirtz pairing did another Mixed Cup season in 1992. Again, Sabine Schmitz and Thomas Marschall were runaway winners, but Jenny and Thomas had a decent season, and were fifth in the team standings. Jenny was second in the ladies’ championship.

Alongside her circuit racing career, Jenny became an adept hillclimb driver. In 1988, she won her class in the Lorentzweiler climb in the RS200. She repeated this in 1989. The Lorentzweiler course is the closest thing that Jenny had to a home circuit, being situated in Luxembourg.