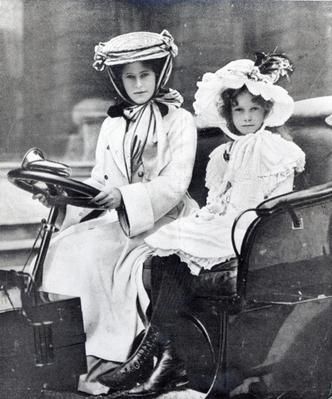 Millicent, the Duchess of Sutherland, with her daughter

The Ladies’ Automobile Club was Great Britain’s first dedicated motor club for women. It was not exclusively a motorsport association, but it was one of the first bodies to organise motor races for women in the UK.

Talk of a women’s motor club began in 1899. Newspapers described the actress Lily Langtry as one of its first members, and Viscountess Harberton as the founder. Little else was heard for three or four years.

In 1903, it starts to be mentioned in the papers again, with Lady Cecil Scott Montagu was its first acknowledged leader. Between 1903 and 1904, the original club seems to have collapsed. Contemporary reports claim this was due to disagreements about membership criteria. Only ladies in “society” were intended to join. Most of the early members were from the titled classes.

Millicent, the Duchess of Sutherland, became its first president in 1904. She oversaw the first Club event in June, a meeting and group drive from Carlton Terrace in central London to the Ranelagh Club in Barnes, via Pall Mall and the park. Fifty-six cars were involved. Many of the ladies drove themselves, although some relied on their chauffeurs. This fact was did not go un-noticed by observers. Among the observers on the day was Queen Alexandra, who watched the parade from the window at Buckingham Palace.

The club’s first AGM was the following month. Rooms were acquired at Claridges Hotel for the use of members, as well as a garage.

Most of the LAC’s activities were social in nature. Typically, one member would hold a meeting at her house. This was followed by a drive out, often to the Ranelagh or Hurlingham clubs, for tea. In 1904, an engineer was booked to give a series of talks on the workings of the internal combustion engine. From time to time, other talks were given, sometimes by members themselves, on aspects of motoring, or their own four-wheeled adventures. Maud Manville spoke at length about her experiences in the Herkomer Trophy in 1906.

In the beginning, there was ambitious talk of a ladies’ team being assembled for the Gordon Bennett Cup. This died down after the false start of 1903. In 1905, some women-only competitions started to be organised by the club. The first of these seems to have been a Ladies’ Handicap at the inaugural Brighton Speed Trials. The Handicap was for touring cars, and was entered by six women.

Heat 1
Heat 2
Walkover:
Mrs Guy Hardy (10hp Panhard)
Mrs Benett-Stanford (13-17hp Dixi)
Final
Only a few days later, the LAC ladies were enjoying their first dedicated gymkhana at the Ranelagh Club. The Ranelagh was the venue for Britain’s first women’s motor race, and had hosted a variety of women’s sports in the past ten years, including a bicycle gymkhana and carriage-driving competitions. Eleven members entered the gymkhana, which consisted of three races and two “appearance competitions”. The results of the races were as follows:

Another LAC gymkhana was held at the Ranelagh Club in 1906. Details for this event are less forthcoming. One of the races was a “Police Trap Race” where drivers had to do a lap of the grass track in a certain time, without the use of a speedometer or a stopwatch. The closest to the time was the winner. A Mrs Harry Adams won. Her car is not recorded.

A further gymkhana may have been held in 1907, or at least some ladies’ races. By then, ongoing problems with waterlogging on the polo pitch that was used as a racetrack meant that events were sometimes cancelled.

The LAC eventually became affiliated to the RAC. Its peak years as an actual motor club were between 1904 and 1910. After that, it becomes more of a social club; ladies did not even have to own a car to be members. It moved to its own premises in 1923.

Winifred Pink, herself an accomplished racing driver on sand, was one of its later presidents, in 1927. As women were admitted into more motor clubs, it gradually became redundant and was eventually absorbed into the RAC.