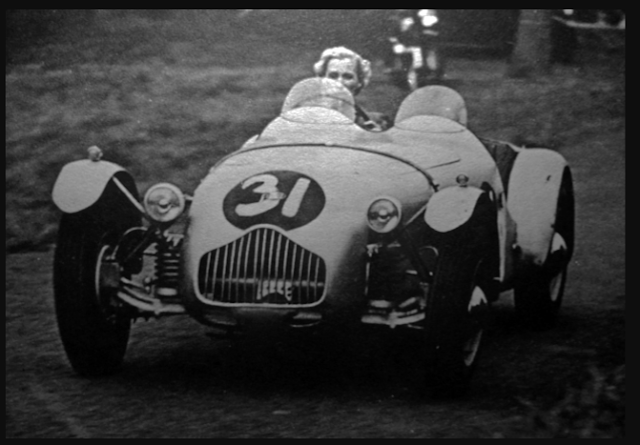 Eleanor Allard competed in trials, sprints and hillclimbs from the 1930s onwards, with some success, but she is best known for rallying during the early 1950s.

Married to Sydney Allard, she had access to works Allard cars. The couple met through Eleanor’s brother, Alan May, who was a fellow car owner and racing colleague. They were all members of Berkhamstead Motor Club.

Before the war, she was mainly active in trials. She and Sydney sometimes drove together. In 1936, they had a lucky escape on the Colley Experts’ Trial; their Allard-built CLK5 overturned and trapped them underneath.

It was not until the late 1940s that she began to compete seriously. Starting in 1947, she made a name for herself in sprints and hillclimbs. Her first major result was a second place in the ladies’ class for unlimited sportscars in the 1947 Brighton Speed Trials, in an Allard. She came second to Betty Haig. The following year, she was ninth in the class for standard sportscars over 2000cc.

In 1949, she won the ladies’ award in the Blandford hillclimb, in a 3622cc Allard. The same year, she entered the RAC British hillclimb championship and was third in class at Prescott, behind Sydney, who won. The couple competed against each other again at Craignantlet, with Eleanor in a J2. Her third Brighton Speed Trial resulted in an overall ladies’ class win, seven seconds faster than Mrs Treen in her Riley.

She improved even more in the 1950 Speed Trials, finishing seventh overall. Her car was a Cadillac-engined Allard. Once more, she was just behind Betty Haig.

Her first big rally was Monte Carlo, in 1950, which she did not finish after starting at Glasgow. She was driving a 4400cc Allard P1, and had her sister, Edna Wood, as navigator.

In 1951, she drove in the Paris-St. Raphaël Rally, and was one of the fastest on the hillclimb and sprint stages. Unfortunately, she managed to get lost in the Alps after winning the Lausanne hillclimb. She had telephoned her husband to say that she had had to retire her Allard P1 owing to engine trouble, and that she was on her way to Geneva to find a suitable garage. Only a short time later, she turned up in St. Raphaël. By the time the story of her disappearance had hit the British papers, she had reappeared again, with Edna in tow.

In 1952, she drove an Allard P1 on the Monte, the year Sydney won, although her own efforts were seriously affected by an off-road excursion. She and her navigator knew that Sydney was due to pass them on the road, and hoped that he would stop to help. When he did pass, however, he did not stop. Having seen that the crew were unhurt, he passed on his way, apparently shouting “see you in Monte Carlo” out of the window.

Later, she won the Coupe des Dames in the Daily Express Rally. This event had a huge entry list of over 400 cars, but it is proving very difficult to find a complete results list.

Her navigators were always one, or both, of her sisters, Edna (Wood) and Hilda (Johnson).

(Image from http://www.allardownersclub.org)
Posted by Rachel H-G at 15:27