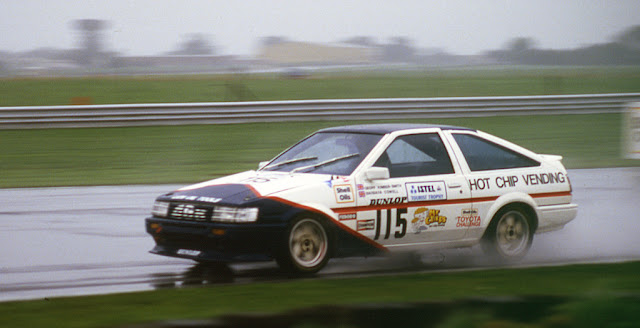 Barbara raced in the British Touring Car Championship in 1988 and 1989.

The first award she won in the world of motorsport was a first place in a fancy dress car parade at Long Eaton stock car track, in 1973. Barbara dressed up as a mermaid on a car sheeted up as rocks, next to driver Tony Allen, who was Neptune.

The Long Eaton track was the scene of her first driving exploits, too, as a junior driver in Ministox. She progressed through the junior and senior ranks, and by 1978, when she was twenty, she was the British Mini-Rod champion. Three years later, in 1981, she was British, European and World Mini-Rod champion.

As she had won almost everything she could in short-oval Mini-Rods, it was a natural progression into long circuit racing in a Mini in 1982. She entered the Mini Seven championship, and was eleventh overall in her first year. This was enough to earn her the Novices award.

In 1983, she moved steadily up the Mini racing ranks, and ended the year as the Lydden Hill Mini Seven champion. In 1984, she was second in the overall championship, winning herself the BWRDC’s Embassy Trophy, and their Racing championship trophy.

For the next few seasons, Barbara raced different cars in the Uniroyal Production Saloon championship. She received support from Gerry Marshall, who prepared her Fiat Strada in 1985, and later provided her with a Vauxhall Astra GTE. She enjoyed some success in these cars, but it was in a Suzuki Swift that she really shone, winning Class D in 1987 with five victories. This gave her second overall in the championship. One of her wins was a two-driver enduro at the end of the season, at Brands Hatch, and she shared the car with Geoff Kimber-Smith. In September, the same driver pairing tackled the Tourist Trophy at Silverstone, a round of the International Touring Car Championship. They drove a Toyota Corolla, but did not finish.

Following on from her Production Saloon wins and ITC experience, it was a logical step for Barbara to test herself further in the British Touring Car Championship.

Her 1988 BTCC season started with the two-driver enduro at Donington, sharing Geoff Kimber-Smith’s Toyota Corolla again. They were fourteenth overall, and won their class. Later in the season, she used a Ford Escort RS1600i run by the North Essex Motorsport team. She was 19th in the Brands Hatch 1000km support race, second in class, but then did not make it to the finish at Snetterton or Brands. She did not qualify for the Birmingham Superprix street race, but it was cancelled anyway, but then the same happened at Donington. In the last race of the season, at Silverstone, she was 18th overall.

That year, she also found time for some Production Saloon races, in a BMW M3. Her best result seems to have been a class win at Castle Combe.

In 1989, she renewed her partnership with Kimber-Smith and the Corolla for one race, at Donington, but did not finish due to a misfire. Illness limited her activities this year, and it was her only BTCC race.

After 1989, she raced less, but she remained competitive in Production Saloons. She took a year off in 1990 to set up a performance driving school, and to marry Peter Babbage. Now competing as Barbara Babbage, she raced the Swift again in 1991, achieving some more top-ten overall finishes.

In 1993, she raced in the Willhire 24 Hours in a Honda Civic. She was part of an all-female team with Clare Redgrave and Kirsten Kolby. They were fourth. They apparently took part in two other enduros that year, with similar success, but the results are not forthcoming.

In either 1993 or 1994, she raced a Peugeot 106 in Production Saloons, scoring at least one second place at Silverstone. 1994 was her last season; it was becoming increasingly difficult for Barbara to find the sponsorship needed to compete at a level of which she was capable. She retired and started a family. In 1994, she became one of the first women to be given full membership of the British Racing Drivers’ Club.