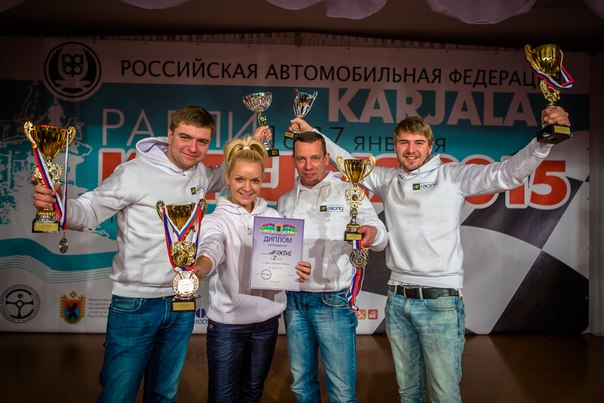 Russia has produced quite a lot of female rally drivers, and there are several active at the moment, in Russia and internationally. Language barriers make it difficult to research all of their careers.

Elena Baikova - Russian driver active since at least 2010. She rallies a Subara Impreza almost exclusively, and competes in Russia mainly, with a few excursions to Belarus. 2012 seems to have been her best season: she achieved two top ten positions. The first was an eighth place in the Rally Zolotye Kupola, and the second was a ninth in the Rally Rostov Velikiy. That year, she was ranked 73rd in the Russian championship. In subsequent years, she has come up against reliability problems, and has been less consistent. Her best result in 2014 was 20th, in the Rally Peno. She drove in six rounds of the Russia Cup, finishing three of them. Her cars were an Impreza, Citroen Saxo and Volkswagen Polo. In 2015, she rallied a Subaru Impreza, but did not finish the Pushkinskye Gory Rally. She tried again with the car in the 2016 Rallye Belye Nochi, but retired after an off-road excursion. In 2017, she got the hang of the Impreza and was sixth in the Mini Rally Petrovskaya Versta. This was one of three finishes in the car. She only did one major event in 2018, the Rally 900 Ozer, and was 25th in the Impreza.

Elena Golubkina – took part in stage rallies in Russia in the 2000s, starting in 2005. Her first car was a Citroen Saxo, and she remained loyal to the Citroen marque for several seasons. During her first year, her best result was an eighth place, in the Rally Ermak. She was also tenth in the Rally Vyatka, and later in the season, driving a C2, won her class in the Novorossiysk Rally. In 2006 and 2007, she mostly drove a C2, and although she did not reach the heights of the top ten, she was 30th in the 2007 Rally Russia, an IRC round. After a shorter season in 2008, she seems to have switched to cross-country rallying, in Russia and Asia. She was 25th in the 2010 Silk Way Rally, driving a Mitsubishi, and was 50th in the 2011 event, in the same vehicle.

Galina Grokhovskaya - campaigned a Lada in Finland and (presumably) the Soviet Union, between 1989 and 1994. Her best result in Finland was 40th, in 1994, despite her car being slow. Unlike some former Soviet drivers, she appeared to be a self-funded privateer. Occasionally she co-drove for other drivers, including Vladimir Turov in Finland in 1992.

Anastasia Mironova - a regular in Russian rallies since 2012. Her car has, so far, always been a Ford Fiesta. In 2012, her best result was 17th, in the St. Petersburg Rally. The following year, she improved this to a 15th place, on the same rally. She scored two top-twenty finishes in 2014, thirteenths at Vyborg and Yakkima. Her favoured surface appears to be gravel, but she has run well in snow rallies, too. Her co-driver is usually Alexey Krylov. She also competed in some rounds of the Russian ice-racing championship in 2013. Driving a VAZ 211200, she scored a tenth and an eleventh place in the SZZ Cup, in the St. Petersburg rounds. She was also 20th overall in the Russian 1600 Cup, but her race results are not forthcoming. Between 2010 and 2013, she participated in several karting championships, at home and in Russia. In 2015, she rallied a Ford Fiesta in Russia and Belarus, finishing in the top ten twice, in the Vyborg and St Petersburg Rallies. She was fourteenth in the 2016 Russian championship, in the Fiesta. Normally, she was in the top twenty finishers, and her best overall position was a tenth place in the Rally Ekover. In 2017, she did fewer rallies than previously. She drove the Fiesta and had a best finish of 23rd in the Karelia Rally. For 2018, she switched to driving a Lada Kalina for most of the season, but got her best result from one of her occasional starts in the Fiesta: ninth in the Rally Gukovo.  She only did one major rally in 2019. After starting the Rally Belye Nochi in the Kalina, its driveshaft gave way on Stage 9.

Elena Sarieva – has made occasional starts in Russian rallies since 2006, although often as a course car, rather than a competitor. She drove a Mitsubishi Lancer in the Gukovo Rally in 2006, but did not finish, due to problems with the car’s cooling system. In 2012, she drove in the Rally of Latvia, in another Mitsubishi Lancer. She does not appear to have finished. Her most recent appearance was in 2013, when she drove a Subaru Impreza as the course car in the Rally Masters Show, in Russia.