The Belles of Brooklands 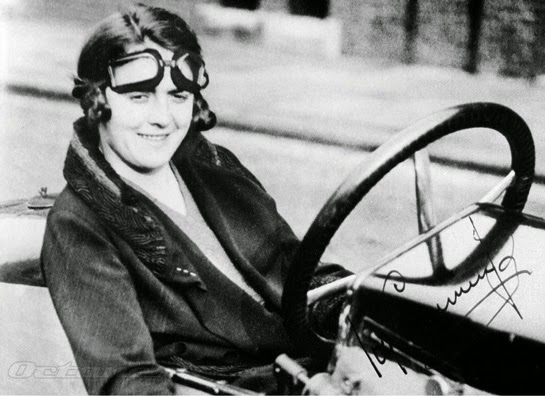 The Brooklands circuit in Weighbridge was the UK's first purpose-built full racing circuit, and was in operation between 1907 and 1939, when it was partially demolished and used as an aircraft manufacturing centre for the war effort.

The Brooklands organising club, the BARC, only sanctioned two races open to women there before the First World War: the 1908 Ladies' Bracelet Handicap and a match race between two of its leading competitors, Muriel Thompson and Christabel Ellis. This was in spite of the presence and influence of Ethel Locke King, wife of the circuit's owner, Hugh. She herself raced in the Bracelet Handicap.

Other clubs that used the circuit allowed women to race, either against other women, or against men.

During the 1920s, the various motor clubs that ran races at Brooklands relaxed their attitudes to women drivers, and during the 1930s, the BARC followed suit. Female racers were a common addition to meetings, winning some titles in the process.

Below is an alphabetical selection of the previously unprofiled ladies who raced at Brooklands, and some of their achievements.

Daisy Addis Price – raced at Brooklands in the 1920s. Her first major result was a second place in the JCC Ladies’ Handicap in 1920. This was one of the first women’s races held since 1908. Her car was a Douglas, which she continued to race until at least 1923, when she entered it into the JCC 200 Mile race. In 1922, she did take part in a “lesser race” in the Douglas, but further details are not forthcoming. Other drivers sometimes raced Miss Price’s Douglas on her behalf, and she commissioned and designed coachwork for at least one car.

Psyche Altham – raced at Brooklands in 1933, finishing third in a Ladies’ Mountain Handicap in an MG Magnette, behind Rita Don and Kay Petre. Earlier in the year, she won her class in the Brighton Speed Trials, in a Magnette, and entered a hillclimb at Shelsley Walsh. She did not record a time, due to a problem with the Magnette’s carburettor. After the 1933 season, she disappears from the motorsport scene. Away from the track, she was a dancer and actress. In contemporary reports, she is referred to as “the London dancer, Psyche Altham.”


“Mrs G. Briggs” – raced a Riley 9 Brooklands at Brooklands itself in 1936. Her first race was the First Mountain Handicap at the March Handicap meeting, in which she was unplaced, but only a month later, she won the First Easter Sports Handicap. At the Whitsun meeting, she was second in the First Short Handicap. Despite her obvious skill, and the praise she received from the likes of Motor Sport, her last race seems to have been the Second August Short Handicap, in which she was unplaced. Her husband, whose car the Riley was, also disappears from the entry lists.


“Miss D.M. Burnett” – drove in the 1930 Brooklands Double Twelve, sharing her own Aston Martin with Goldie Gardner. They did not finish, due to a broken valve spring. This was not her first foray into motorsport; she was disqualified from a Ladies’ Race at Brooklands in 1929 for jumping the start. Even earlier, in 1928, she entered the JCC’s High Speed Trials at the Weybridge circuit, driving an Alvis. Later, in 1932, she attempted the JCC 1000 Mile race in a Riley 9, partnering P.R. Mitton-Waterfield. They did not finish.


“Miss D Chaff” – raced a Fiat Balilla at Brooklands. In 1936, she led an all-female team of Balilla drivers to fourth place in the LCC Relay, with Elsie Wisdom and Mrs Lace. She first appears on the Brooklands entry lists in 1935, as an entrant in the Ladies’ Mountain Handicap, although her finishing position is not given. In March 1936, she took on the Mountain circuit again in an open race, but does not seem to have finished. She also raced at Donington, but retired with a broken trackrod. Her given name is never used.


Cecil Christie (often credited as “Mrs. C. Christie”, although Cecil was apparently her given name) - South African driver who raced at Brooklands in the 1920s, although not in any of the major races. She was a member of Southport Motor Club and drove in the their beach race in 1926, using a Vauxhall. The previous year, she had won a beach race at Skegness, also in the Vauxhall.

Dorothy de Clifford (“Lady de Clifford”) - initially a Brooklands hanger-on, who later became a race and rally driver. She first appears in Barbara Cartland’s 1931 “Society Ladies’ Private Handicap” film hoax, as riding mechanic to Princess Imeretinsky, who appeared to win the staged race. In 1932, she raced an MG in the Duchess of York’s race for lady drivers, at the Guys Gala at Brooklands. Also that year, she entered the RAC Rally, driving a Lagonda. Her finishing position is not recorded.

Violette Cordery - most famous for her record-breaking exploits in Invicta cars in the late 1920s and early 1930s. She set records for speed and endurance around the world, sometimes assisted by her sister, Evelyn. In the 1920s, she won a number of club races at Brooklands, also in Invictas, but was forbidden to take part in major events. Later, she was tenth in the Large Car class of the 1933 Scottish Rally, driving an Essex Terraplane.


Rita Don - winner of a ladies’ race over the Brooklands Mountain circuit in 1933, defeating the favourite, Kay Petre. She was driving a Riley 9 belonging to Freddie Dixon (sometimes described as her brother, which he was not). Dixon acted as her riding mechanic, and stories abound of his pricking her with her hatpin when she needed to go faster. Photographs of her in 1934 appear to show her ready to race, at Brooklands, chatting to Kay Petre, and she did indeed race a Marendaz, a Lea-Francis and the Riley that year. She entered the Ladies' Mountain Handicap again, but was unplaced. She was the sister of Kaye Don, and her married name was Livesey.


Bessie Duller - raced at Brooklands and in the south of England in the 1920s. In 1923, at Brooklands, she won an "Impromptu Handicap for Any Car or Motorcycle", then in June, she won one of the Surbiton Motor Club's Brooklands races, both in an Amilcar. In 1925, she appears on the start list for a ladies’ race in Kent, driving a Lancia. In 1926, she raced an Austin Seven at Brooklands, in the Surbtiton 150 Mile race. She was often credited as “Mrs. George Duller”.

Colleen Eaton – Australian racer who competed at Brooklands and Le Mans, occasionally as an MG works driver. She was Margaret Allan's team-mate for MG at Le Mans in 1935, and they were 26th.

Marjorie Eccles - raced between 1934 and 1939, often alongside her husband, Roy. She was an occasional entrant in Brooklands races of the time, driving a Singer, or the "Eccles Rapier" Lagonda special, which she also raced at Brooklands in 1935, and Crystal Palace in 1936. After 1936, her profile becomes higher. She partnered Roy at the Ards Tourist Trophy in a Singer that year, then drove at Le Mans in 1937 in a Singer Nine, with Freddie de Clifford. They did not finish. Later, she turned to rallying exclusively, after Roy's untimely death early in 1938. In 1938 and 1939, she entered the RAC Rally. Her car in 1939 was a Daimler.


Mamie Frazer Nash - raced a GN in the Brooklands ladies’ races in the early 1920s. She was one of three women who entered the BARC’s second official ladies’ event in 1920. She raced the GN again in 1922, in another ladies’ race, but did not finish. She may have also competed in hillclimbs. Mamie, born Alice, was married to Archie Frazer Nash of the eponymous car company, who also owned GN. Mamie became a director of Frazer Nash in 1932.

“Miss G (Grace?) Hedges” – raced in and around Brooklands in the 1930s. She first appears in the entry lists in the JCC’s High Speed Trial, in 1932, driving a Riley, but she was most associated with Talbot cars, one of which she owned jointly with Patricia McOstrich. In 1932, she scored her first Brooklands win, in a Talbot 90, the Sports Long Handicap at the Inter-Club Meeting. Other notable results include a second in the Cobham Long Handicap in 1933, and third in a 1933 Lightning Short Handicap. Later on, she raced a Singer and a Frazer Nash-BMW, in which she was part of a Frazer Nash team with Kay Petre, for the Light Car Club Relay in 1936. She was also active in rallying in the UK.

Joyce Houldsworth - raced a Bugatti at Brooklands and in hillclimbs. She first raced in 1933, in the Ladies’ Mountain Handicap. In 1934, she was second in the novice class of the Bugatti Owners’ Club hillclimb at Lewes. That year, she also raced the Bugatti at Shelsley Walsh, and in a second Ladies’ Mountain Handicap at Brooklands. She returned to Shelsley Walsh in 1935, driving a Houldsworth Special. Her husband, John, was also a racing driver. Joyce continued to compete in his car after his death in an accident in 1934.

Henrietta (Mabel) Lister – owned and raced an Aston Martin in the 1920s. Pictures of her in racing garb, next to a car at Brooklands, exist from 1924, but no race results. In 1925, she was second in two editions of the Essex Long Handicap. Similar pictures show her car in action at meetings of the Essex and Middlesex Motor Clubs. In 1928, she was one of the entrants in a Surbiton MC Ladies’ Race. There is some confusion about when exactly Henrietta competed, as other drivers often used her car, and she was named as the entrant. After her time as a racing driver, she married one of her regular drivers, Jack Waters, and then became an exotic dancer known as “Henrietta Listacova”.

"Miss MJ Maconochie" (Margaret?) - winner of the first official BARC race for lady drivers at Brooklands, in 1927. Her car was a Salmson. She had previously won gold medals in high-speed reliability trials, and continued to race after her 1927 appearance. In 1928, she took an Amilcar to Boulogne for the Coupe Georges Boillot.

Patricia Oxenden – Jersey-based driver who raced at Brooklands, as well as on short tracks in Midget cars, and on Jersey itself. Her usual car for Brooklands was an Alta, in which she won a Ladies’ Mountain Handicap in 1935. As well as races, she also occasionally competed in trials at Brooklands, in the Alta. Another of her cars was an SS90, which she has said to have used in Jersey. As well as motorsport, Patricia (sometimes referred to as “Dot”) was involved in the early surfing scene in the UK, alongside her husband, Jeremy.

Winifred Pink - raced a number of cars in the UK in the 1920s. She was an expert at beach racing and competed at Skegness in 1926, driving an AC, and at Southsea in 1923. One of her earlier cars was a Horstman, in which she won BARC Ladies’ races at Brooklands in 1922 and 1923. She used this car in hillclimbs at Shelsley Walsh, Caerphilly and other venues. Later in her career, she hillclimbed an Aston Martin and an Alvis. In the late 1920s, she wrote quite extensively on the motor racing for women, claiming that most women were not strong enough to drive the fastest cars. She suggested smaller touring cars instead. In 1927, she was elected President of the Ladies’ Automobile Club.