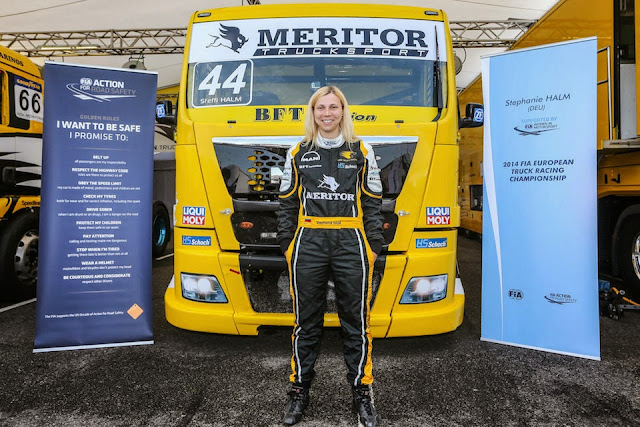 Steffi with her race truck

After six years of karting in her native Germany, Stephanie Halm took her first steps in full-sized motorsport in 2001. She had won two regional championships in her final two years of karting. Her chosen path was single-seaters, and she joined the popular Formula König. After a hesitant start at Oschersleben, where she was thirteenth, she had a very competent debut season. In Round Two at Lausitz she was sixth, at Salzburg she was eighth, and was ninth at the Nürburgring. Her second visit to the Lausitzring gave her another eighth, and she was seventh at Hockenheim. In the penultimate round at the Nürburgring she was seventh, and at the final race at Oschersleben she scored her best result: fourth. This consistent performance was good enough for seventh in the championship.

After this strong start, she switched to the more powerful and competitive Formula Renault 2.0 in 2002. Driving for the Auto Hackel team, she was not as comfortable with the car as she had been the previous year. She was 19th and fourteenth in her first two races at Oschersleben, 20th in both races at Hockenheim, 18th and 16th at Lausitz, 21st and thirteenth at the Nürburgring, 16th at Salzburg, 20th and 17th at the second Nürburgring meeting, and 15th and seventh at Oschersleben, saving her best result for last once more. She was 19th in the drivers’ standings, and did not return to the formula the following year.

Formula Volkswagen was her choice of competition in 2003. In her first two races at Oschersleben, she was out of the top ten, partly due to missing qualifying in order to sit an exam at school. She broke into the top ten with a ninth spot in the fourth race at Hockenheim. She scored an eighth place at the Nürburgring and was tenth and eighth at Salzburg. Showing more consistency, she was seventh and eighth at the Lausitzring, and seventh and tenth at Oschersleben. She was eighth overall.

She then changed to tin-tops, recording the first female win in the Alfa Romeo 147 Cup in 2004. Her victory at Oschersleben, the second round of the championship, was also the first win by a female driver in a diesel-powered car. She did not do quite as well for the rest of the season, but was still good enough for sixth overall, and second in the junior driver standings.

She repeated this feat in the Mini Challenge in 2005. Driving for the ROMA Wiesmann team, she won one of the races, and finished the year in sixth.

She was retained by the team for the 2006 season, and did not disappoint. She won one race, and finished in the top three on four more occasions. In the end-of-season final, she was fifth. Overall, she was fourth, comfortably ahead of Johannes Stuck.

In 2007, she did some races in the Porsche Carrera Cup, as part of the Tolimit Inventure team, with Hannes Plesse. She was supported by Eve Scheer, a Porsche Cup regular. Sadly, the Porsche did not suit Stephanie at all, and she was off the pace all season. She had a best finish of eleventh at Zandvoort, and did not finish four of her races. She was 23rd overall.

As well as one-make series, Stephanie has tackled some longer races. In 2005 and 2006, she was part of an all-female endurance team consisting of her, Nicole Luttecke, Kati Droste and Catharina Felser, driving a Mazda RX-8. They raced in the Nürburgring and Dubai 24 Hour events, coming fourth in class at the Nürburgring. They were not classified in Dubai. She also joined the Daikin team for the 2006 Zolder 24 Hour race. Her car was a BMW 120d, and her team-mates were Alexandra van de Velde, Gaby Uljee and Caroline Grifnée. They did not finish. After a short hiatus from endurance events, Stephanie returned to the Nürburgring 24 Hours in 2008. She was driving a Mini Cooper run by the Schirra team, aided by Harold Proczyk and Heide von Bohlen und Hallbach Friedrich. They were 94th, and twelfth in class.

Schirra Motoring continued to work with Stephanie in 2009, entering her into another Mini Challenge. Her season did not go as well as previously, with her best finish being second at Silverstone. She incurred three retirements that year, which was unusual, and may explain her lack of usual pace.

In 2010, she drove in the Porsche Super Sports Cup in Germany, and this particular Porsche, a 997, suited her well. She was third overall. Driving a similar car in 2011, she was fourth in the Barcelona 24 Hours for Besaplast Racing. She and her team-mates, Roland and Sebastian Asch, Franjo Kovac and Martin Tschornia won their class.

The rest of 2011 was spent in the Mini Challenge, and in the European Truck Racing Championship, driving a Mercedes truck. In the Mini, Stephanie was ninth, competing against some of her Barcelona team-mates. However, she did not have the pace of her early seasons, with another best finish of second at Salzburg. In trucks, she was less competitive, with a best finish of twelfth in the final race, at Le Mans. She did not compete in all forty races of the season.

Stephanie maintained her ties with Besaplast in 2012, and the same team that competed in the Barcelona 24 Hours, drove in the Dubai equivalent. They were 28th, second in class. She also made a successful return to the revamped MINI Trophy, winning the second race at Oschersleben, after coming third in the first. She scored five more podium positions, and was third overall in the championship. She also drove the Besaplast Mini in the Nürburgring 24 Hours, but did not finish. Assisted by Jurgen Schmarl, Franjo Kovac and Fredrik Lestrup, she completed 154 laps.

Truck racing had not been forgotten; driving a MAN, Stephanie guested at the Nürburgring round. Her best finish of her four races was eighth.

In 2013, she completed six rounds of the European Truck Racing Championship, in a yellow MAN truck. She was fifteenth overall, after a more consistent run of points finishes. Her best finishes were a series of eighth places, achieved at Navarra and Most.

Stephanie drove in the European Truck Championship in 2014, and was more competitive. She did the whole season in a MAN, for Lion Truck Racing. Her best round was at Navarra, in Spain, where she achieved three sixth places. She also came sixth in one of her Nürburgring races. Her normal position was somewhere in the top ten, and she was joint tenth overall at the end of the season.

Her fifth season in the Truck championship showed more improvement. Still driving for the Lion Truck team, she was eighth in the championship, despite not running a full season. Her best circuit was undoubtedly the Hungaroring, where she scored her first win, and another podium, a third.

As well as trucks, Steffi returned to cars in 2015. She drove a BMW Alpina G6 GT3 in the DMV-GTC (German GT Championship), with Hermann Wager. They were 16th overall, after a part-season, and Steffi's best finishes were three class podiums.

In 2016, she was a real contender in the ETRC. She won four races, at the Nürburgring, the Hungaroring and Le Mans. This left her fourth in the championship, not far behind third-place man, Rene Reinert.

She kept up her form in 2017, keeping her fourth place in the championship. She won at the Red Bull Ring, Slovakiaring and Le Mans, and earned second places at the two other Slovakiaraing races.

Steffi was sixth in the 2018 European Truck championship, two points behind fifth-placed Norbert Kiss. She won two races outright, at the Nürburgring and Zolder. Her wins were supported by a long string of podium positions.

She continued to be a leading driver in the European Truck championship in 2019, finishing fourth overall. Although she did not record another win, she was very consistent and earned herself and Schwabentruck Racing eleven podium positions, five seconds and six thirds.