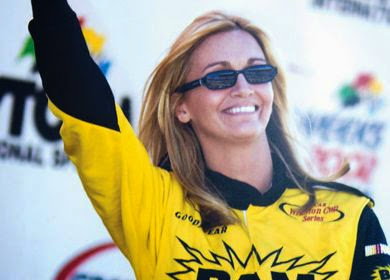 Shawna as a BAM driver

As soon as she was old enough to drive, Shawna Robinson was racing. To begin with it was snowmobiles, then she moved on to trucks at the age of 19. From 1983 to 1988, she competed in the Great American Truck Racing Tour, winning a few major events, including the 1984 Milwaukee race, and the 1987 Big Rig 100.

She graduated to stock car competition in 1988, and instantly made an impression, coming third in her first Goody's Dash race at Daytona. Later in the year, she captured her first win at New Ashville. Her efforts earned her both the Rookie of the Year and Most Popular Driver awards.

In 1989 she completed another full season in the Goody's Dash championship. Her biggest achievement this year was winning a pole position at South Carolina, the first woman to do so. Her second pole was at Myrtle Beach, where she converted it into a win. She was the Most Popular Driver again at the end of the year.

After three wins and 21 top-tens in the Dash series, Shawna was intent on progressing further up the NASCAR ladder. She started a few Busch Series races in 1990, with this aim. Her high point this year was qualifying second for the Florida 200 at Daytona.

The following season, she was signed by Huffman Racing, to drive the Sparky's Racing Buick. It was a four-race deal and Shawna used it to gain more experience of the Busch tracks. Her best finish was in her first race, at Orange County. She was 15th.

Her 1992 schedule expanded to fourteen races, and her overall placings were getting better. Her best finishes were a pair of eleventh places. She was second in the Rookie standings and learning fast. Her first full Busch Grand National season followed in 1993, driving for the Polaroid team, after a couple of races with them in 1992. She was 23rd overall, and now a professional driver. Her best finish was twelfth, at Indianapolis.

1994 was the year that her Busch career really took off. She took her first outside pole in February, at the South Carolina Goodwrench 200. A month later she earned her first outright Busch pole position at Atlanta, which was also a new track record of 174.33 mph. Sadly, she crashed in both races and ended up far down the order. At the other end of the race, she managed her first top-ten in the category at Watkins Glen.

A switch of teams in 1995 meant limited finances, so 1995 was another part-season for Shawna. She drove a Ford Thunderbird for CPR Motorsports in a few Busch races before taking a long sabbatical for the birth of her two children. Before retiring, she attempted to qualify for the NASCAR Daytona 500, its blue riband event, but failed.

Five years later, Shawna, now 36, returned to the track. She opted out of the NASCAR family this time, preferring to race in the ARCA stock-car championship. She proved quickly that she had lost none of her touch, recording top-ten finishes in nearly half of her starts and ending the season in sixth. This was the first time a female driver had finished this high on the ARCA leaderboard, and the first time a woman had tackled a full calendar. Her best finish was second, and she scored one pole position at Michigan. She also led a race at Toledo, the first female driver to do so.

Having reacquainted herself with the inside of a racing car, it was back to NASCAR in 2001. She got herself a ride with Michael Waltrip Racing for three events, and finished one, coming 19th at Talladega. Unfortunately, she crashed out of the other two. Later in the season she made another attack on the Winston Cup, aided by team boss Michael Kranefuss and sponsorship money from Tropicana. Of the four races for which she was named as a driver, she got to the startline of one, at Michigan. Following a spin, she was 36th overall.

Having lost her Tropicana backing, Shawna was picked up by BAM Racing, a small Winston Cup team run by Beth Ann Morgenthau. Shawna was scheduled to take part in 24 Winston Cup races, and finished her first race, at Daytona, in 24th. However, things went downhill from there, and the Iowa driver often found herself being substituted for her team-mate, or running on experimental and unsuitable car setups. She lasted seven races with the team, during which she scored no notable points, before being released.

Vowing to carry on, Shawna put the BAM debacle behind her and tried her hand at the Craftsman Truck series, supported by Mike Starr. In a newsworthy move, her team hired an all-female pit crew for her first race at Texas. It was a move that almost paid off; Shawna was 18th overall at the end of the race, after a mistimed pitstop put her down the field. She had been running much higher than that previously. The other two races she took part in ended in engine failures.

After her funds dried up, she went back to running her own interior design business during 2004. She has among her client list several Winston Cup drivers and team managers, and is highly-regarded in this field.

Shawna attempted a comeback in 2005, driving a Keith Coleman Racing Chevrolet Monte Carlo in the Busch Series. She was retained by the team for six races, finishing five of them, but with no success.

She has not been active in motorsport since then and her official website has been taken down. Shawna now works as an interior designer. In 2014, it was announced that she had breast cancer, which happily went into remission at the end of 2015.