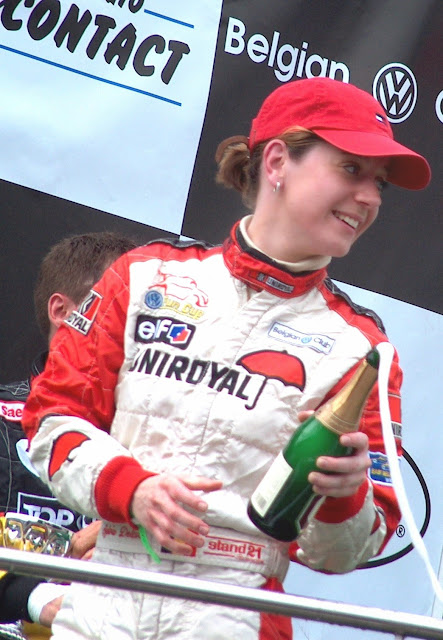 Sylvie on the BTCS podium

Although not a household name outside her own country, Sylvie Delcour of Belgium is one of her homeland's most decorated domestic drivers. Born in Verviers in 1975, she took up club racing at nineteen.

After two years of club competition, Sylvie took her first steps in the Belgian Procar touring series. Her first big race was in 1997, the Spa 24 Hours, which was then a race for saloon cars. Driving a Renault Clio Williams, she was third in the class for small group N vehicles and 25th overall, not a bad first attempt. For the rest of that year, she drove her Clio in the Renault Clio Eurocup.

It was back to Belgian Procars in 1998, where Sylvie teamed up for a part-season with Vanina Ickx. They shared a BMW 320i run by the BMW Fina Junior Team and achieved mixed results, until Vanina left the team to join Renault. Sylvie entered the Spa 24 Hours again in the same car, coming fourteenth this time.

Still in the BMW, Sylvie persevered with the Procar championship in 1999 and started to show her mettle. She ended the year as champion of Division Two and scored her best finish in the Spa 24 Hours to date: seventh overall and second in class.

It was time for something completely different for the following season. Sylvie got involved with the Volkswagen Fun Cup, an endurance championship for space-framed VW Beetles. With her team-mates, she was fully on the pace and came second in that year's standings, an achievement she repeated in 2001.

That year, the VW was not Sylvie's only car. She was also campaigning a Citroen 2CV in national events with considerable skill. At that year's Belgian 24 Hours of 2CV she and her team were fourth, and at the five-hour Dijon 2CV race she was the winner. Earlier in the year, the increasingly-versatile Sylvie had tried her hand at rallying, too. Driving a 1400cc group N VW Polo, she was 26th overall and second in class.

Her career continued in the same vein in 2002. She was fourth in the Belgian Fun Cup and retained her runner-up spot in the European Fun Cup. In the 2CV she fared even better, driving hard in a big field of cars and walking away as Belgian 2CV champion.

Mid-season, she was called back to the Spa 24 Hours, now an FIA sportscar race. She was snapped up by PSI Motorsport to drive a Porsche 996 Supercup alongside Loïc Deman and Philippe Tollenaire. The trio were 21st overall and fifth in their class.

2003 was a hectic but highly rewarding season for Sylvie. She had teamed up with Fanny Duchateau and Sabine Dubois as the "Rain Tyre Ladies" the previous year in the Fun Cup, and the partnership they had proved very hard to beat this year. The three women swept the board of Fun Cup titles, being crowned Belgian and European champions, and winners of the arduous 25-Hour race at Spa. This was a good tactical drive, making use of safety car periods well.

Back at Spa, Sylvie was again doing the 24 Hours as part of FIA GTs. Her car this year was another Porsche, a 996 GT3 Cup belonging to Land Motorsport. Her co-drivers were Loïc Deman, Christian Land and Peter Scharmach. They were a fighting twelfth overall, with a class win, another win to add to Sylvie's haul.

In addition to all these wins, she still found time to compete in the Clio Cup, gaining a best finish of third. At the end of the season, the Royal Automobile Club of Belgium awarded Sylvie its Ladies' Trophy and more importantly, the Casque d'Or (Golden Helmet) for outstanding achievement.

2004 was another busy year. Sylvie's main focus was the BTCS touring car championship. Her car this year was a tube-framed silhouette BMW, which obviously suited her driving style; her results were five thirds, a second and three wins, making her the series champion on her first attempt.

Yet again, she entered the Spa 24 Hours, driving an EBRT Lotus Elise with Jose Close, Lino Pecoraro and Philippe Menage. They were 21st overall and 3rd in class, although not classified at the end of the race. A month later, Sylvie returned to Spa for the Le Mans Endurance Series, where she was sharing a G-Force Pilbeam LM2 car with Philippe Haezenbrouck and Frank Hahn. There was more disappointment here, as the car did not make it to the end of the race. In between the two major Spa events, Sylvie also fitted in a trip to Zolder for the 24-hour race there. She was the fourth driver in the Daikin all-female team of herself, Vanina Ickx, Alexandra van de Velde and Fiona Leggate. They won the Ladies' Trophy in their Mini, despite finishing well down the order.

There were better results for the woman from Verviers in the two rounds of Formula X Sport she took part in. At the Nürburgring round, she came ninth and third and in Dubai she was fifth and sixth. Her results were enough to give her sixth in the championship. She also tested a works Courage C65 sports prototype at Magny-Cours, with a view to entering Le Mans in 2005. To round off another good year, she was awarded a rare second Casque d'Or and the RACB Trophée Féminine.

In the end, Sylvie did not start at the classic French race with the Courage team, although she was named as a reserve driver. 2005 was a much quieter year for her all round, mainly focused around the BTCS. She had moved up a class in the championship and was now driving a Porsche 996 Supercup. She was not as successful as she had been in the BMW and her best result was second at the BTCS 12 Hours of Spa, driving with David Loix. The 24-hour version was less of a triumph though; the Gillet Vertigo that Sylvie was driving with Bas Leinders, Renaud Kuppens and Jérôme d'Ambrosio did not give them a finish. The Belgian Racing machine was fast but unreliable and fragile.

For a complete change, Sylvie also took part in the Yamaha Girls Raid, a motorcycle cross-country rally for women in Morocco.

2006 saw the Belgian woman take another step into the rally-raid world. This time she entered the Rally Aïcha des Gazelles, a women-only event across North Africa, using a similar route to the later stages of the Paris-Dakar. She had an experienced co-driver in Corentine Quiniou, and they were sixth overall.

The BTCS had not been forgotten either. A Toyota Yaris was Sylvie's mount for the Spa 12 Hours. She was 24th overall and the winner of class T1. She also took part in the 24 Hour 2CV race and the Fun Cup 25 Hours. Here, she teamed up again with Corentine Quiniou.

She took part in more rally raids in 2007. Sylvie and Corentine entered the Trans African Classic together in a Toyota HDJ80. They were contesting the Classic class and had hopes of a win. At the end of the event, they were eighth, with one stage win and the Ladies’ award.

The BTCS had not been forgotten either. Sylvie finished third in class S2 after a series of strong finishes, including at least one win. Driving a Street Machine Solution F with Yvon Decour and Jean-Claude Meert, she was seventh in the Spa 12 Hours.

In 2008, she was absent from the BTCS. She entered one rally raid, the Trans Tunisia, on a Bombardier quad. It is unclear whether the event actually took place, and if so, where Sylvie finished. Since then, she has taken off-road riding training in Costa Rica and entered a number of rally raids on a KTM motorcycle, starting with the Rallye Aïcha des Gazelles, and moving on to mixed events in Libya and Tunisia.

In 2011, she drove a Dacia Duster in the Rallye des Gazelles, and won the Eco Driving Award for the lowest fuel consumption. They were second overall. She continued to enter the Gazelles event until at least 2014.