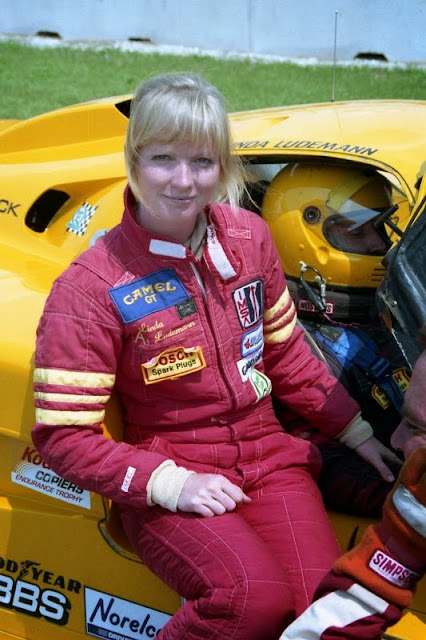 The IMSA (International Motor Sport Association) sportscar series began as a championship proper in 1971. It was based in the United States, but attracted an increasingly international field during its twenty-seven year history.

Originally open to GT and touring cars, it first admitted sports prototypes in 1981. These cars came to dominate, with manufacturers such as Porsche and Jaguar vying for the title. It was disbanded in 1998, although it has existed as a sanctioning body for sportscar racing in the States since 2001. It has recently re-emerged as a race organising body.

The series, at different times, ran the Daytona 24 Hours and Sebring 12 Hours, as well as other major sportscar events.

Many female drivers took part over the years, particularly in the middle period during the 1980s. Some, such as Lyn St. James and Janet Guthrie, combined IMSA competition with open-wheel racing, and a few, such as Patty Moise and Kat Teasdale, also drove in NASCAR competition. Below are short profiles of some of the other female entrants. Deborah Gregg now has her own post, as do Bonnie Henn, Margie Smith-Haas, Alice Graves and Ashley Freiberg.


Sarah Cattaneo - finished second in the 2017 IMSA Continental Tire Challenge, driving a Nissan Altima. She and her team-mate Owen Trinkler won two races, at Virginia and Road Atlanta. In 2016, Sarah also won two races in the Challenge, driving a Honda Civic with Trinkler. They were 17th in the championship, which was their seventh run in it together. They began in 2010 with a Mini, before moving to the Civic in 2012. After a year out, Sarah came back to racing in the 2019 Pirelli GT4 America West series, in an Audi R8. She scored three third places in the Pro-Am class, again with Trinkler. As well as IMSA, Sarah has raced in the 2013 Pirelli World Challenge, in the Civic, finishing seventh overall. She also made some guest appearances in the 2012 Canadian Touring Car Championship in a Mini.


Bobbee Nylander – competed in IMSA events between 1977 and 1982. The biggest race of her career was probably the 1977 Sebring 12 Hours, in which she drove a Porsche 911 with Gary Nylander and Michael Hammond. They were thirteenth, and third in the GTU class. Her best individual result was ninth, in the 1978 Sears Point IMSA race. Bobbee always drove a Porsche 911, and was a regular in the Riverside 6 Hours between 1979 and 1982.

Vicki Smith - raced sportscars up to international level in the early 1980s. In 1981, she had finished the Daytona 24 Hours and Sebring 12 Hours in an AMC AMX. Her team-mates were Bob Lee, Tom Alan Marx and Sam Miller. In 1982, she was 25th at Daytona, driving a Porsche 911 and 22nd at Sebring. The Klaus Haus team, consisting of Vicki, Klaus Bitterauf and Scott Flanders, contested several more IMSA events that year, with a best finish of 17th, at Charlotte. Driving an Audi 80 for a different team, Vicki was 16th with Edgar Doren and Peter Aschenbrenner. During the 1983 season, she switched between the Klaus Haus Porsche and a Pontiac Firebird. Her best finish was another 16th, at Miami, in the Firebird. She continued in 1984, driving different cars, but was not as successful. She is now involved in classic motorcycle events.


Aurora Straus - raced in the 2017 IMSA Continental Tire Challenge. Her car was a Porsche Cayman. She shared it with Connor Bloum, and they were eleventh in the championship. Her best finish was fourth, at Daytona, and she was almost always in the top ten. This was her second season in the series, having done two races in 2016. This made her, at 17, the youngest driver ever in the Challenge and she was eighth in her first race at Watkins Glen. In 2018, she was even better, finishing second in the GTS Am Challenge of the Pirelli World Challenge, driving a BMW. She won two races. Her IMSA activities were limited to one start in the Daytona 24 in an Aston Martin, which did not finish. It was the same in 2019, although she drove a BMW M4 and did one race in the IMSA Michelin Pilot Challenge. Previously, she raced a Mazda MX-5 in 2015 and 2016, as well as undergoing driver training. She came straight into cars with no karting experience.

Janis Taylor - raced sportscars in the 1980s, in the USA. Her first year of major competition was 1980, when she drove an Alfa Romeo Alfetta in the Sebring 12 Hours. She and her two team-mates, including her husband, Del, did not finish. For the next two seasons, she mostly drove a Chevron in IMSA events, including the Sebring 12 Hours, which she entered four times between 1980 and 1985. Her second attempt, in 1981, was as a solo driver, as her two team-mates did not start. In 1984, she switched to a Pontiac Firebird owned by Walter Johnston as her main car. Her best result was 21st, in the 1984 Riverside 6 Hours.

Kristin Treager - intended to compete in the IMSA GT3 Cup in 2014, driving a Porsche 997 GT3. She first entered the championship in 2013, taking part in the Road Atlanta and Road America meetings. Her results were three third places, and one seventh. She had a chance of the title until the final round, when she was hit by another driver and wrote off her car. In 2013, she also raced Porsches in the Porsche Club of America’s Cup Car Challenge, winning the GTC4 class. Previously, she has won other club championships, in Porsches, production stock cars and Bandolero racing. She also appears on motoring –related TV programmes in the USA. In 2014, she did not race, having lost her main sponsor due to the large costs incurred after her crash. She concentrated on driver tuition and TV work after 2015.