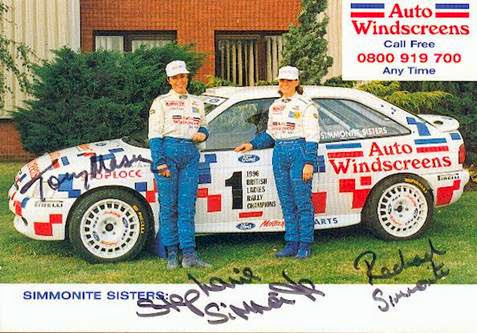 The "Simmonite Sisters" and their Ford Escort

Always part of a team with navigating sister Rachael, Bradford's Stephanie Simmonite was a well-known character in British rallying in the 1990s. Her father, David Simmonite, was a long-standing exponent of off-road rallying, and the creator of the Simmbugghini off-road vehicle, so it was only natural that the two girls got their start in all-terrain buggies. They were winning stages in major off-road events as early as 1992, when they were both in their very early twenties.

After a couple of years in off-roading, Stephanie and Rachael secured sponsorship from Birkbeck Rally Sport and took up regular stage rallying, in a Peugeot 205, in 1994. Their finishes were impressive enough to allow them to compete on the RAC Rally that year, and they finished 51st.

A semi-works-prepared Honda Civic was the Bradford sisters' mount for the 1995 season. Stephanie was 24th in the Mintex National Championship drivers' table, sixth in Group A, second in Formula Two, and winner of class A7 and the Amateur trophy. Her second RAC Rally brought a 39th place, second in class N2, despite going through most of the event with no intercom. She and Rachael had relied on shouting to communicate.

1996 was one of Stephanie's best rallying years. She and Rachael were driving a semi-works Ford Escort RS200 Super Rally Car in the British Championship, with the likes of Gwyndaf Evans and Martin Rowe. Her best finish was twelfth on the Ulster Rally, and she was an impressive thirteenth on the Manx Rally, a European Championship counter. This result helped her to fourth overall in the championship, and the Ladies' title.

Even more impressive was the fact that she had carried on a campaign in the British Hillrally Championship in a Simmbugghini, winning the first of two Hillrally titles. The only real downer that year was a DNF in the RAC Rally, in the Escort.

A much more consistent Stephanie returned to the BRC in 1997. The "Simmonite Sisters", as they were always known, came seventeenth in Ulster, thirteenth on the Scottish Rally and eleventh on the Isle of Man. They were eighth overall in the championship behind Justin Dale, and a career-best nineteenth on the RAC Rally in the Escort. They also managed to squeeze in a Scottish Hillrally win in the trusty Simmbugghini.

Results-wise, 1998 was probably Stephanie's best year for stage rallying. She was eighteenth on the Pirelli Rally, ninth on the Manx and eighth in Wales, her highest finishes to date. It is odd that someone so used to rough conditions always ran so well on the Manx tarmac. However, she lost her Ladies' crown to Scot Barbara Armstrong that year, and was eighth in the championship behind her.

Off-track events at the end of 1998 meant that Stephanie lost her Ford contract, and turned her back on the stages. She returned to off-roading full-time and walked away with two championships: the British Hillrally title and the RAC British Off-Road Championship.

Having gone as far as she could in British off-road rallying, Stephanie embarked on a new challenge in 2001. That year, she became the first foreign driver to win the French All-Terrain Championships, with three outright wins to her name. She and Rachael were competing in a fearsome Rivet buggy, based on the BMW M3 sports saloon car.

The end of 2001 brought another new challenge. After marrying fellow off-roader Matt Lee in 1999, Stephanie was pregnant. She announced her "maternity leave" in the motorsports press. Rachael carried on as co-driver to her father, and won another Scottish Hillrally that season.

After a two-year break, the pair returned to the French championship in 2003. They walked away with the title in the Rivet. It is not clear how much they competed in the intervening years, and the sudden death of their father in 2007 may have put them out of action temporarily. However, the sisters definitely returned to the French championship in 2008, and still compete together now. They were third in the 2008 Dunes et Marais event in a Fouquet buggy. They also used this vehicle, which has a Nissan engine, in 2009. Stephanie often drives with her sister, but has also had Chris Brennan as her navigator.

The sisters were still in action, in off-road events in France, in 2011. They were fourth in that year's Rally of the Dunes at Marais, and also drove in the Jean de la Fontaine event.

In 2016, the sisters got back together as a team, and competed in off-road rallies in the UK and Europe.

(Image from an Auto Windscreens promotional card)
Posted by Rachel H-G at 10:13