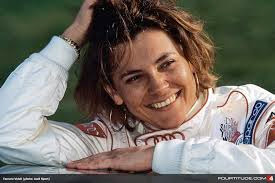 Tamara as an Audi driver

A star of the Super Touring heyday of the 1990s, Tamara has raced all over Europe, in a variety of saloons. Born and raised in Italy, her career commenced with the then all-female Nordauto team in 1991, driving an Alfa Romeo 33QV in Italy. Her team-mate was "fellow" Italian Romana Bernardoni. While Bernardoni took a while to get used to the tracks, Tamara really developed as a driver, and carried off the Italian CIVT (Campionata Italia Velocita Turismo) championship the following year, only her second year of serious competition. By this time she had advanced to driving a powerful Alfa Romeo 155. She campaigned various versions of this car in Italian touring cars for another two seasons. She was sixth in the 1993 Italian Super Touring Championship, and tenth in 1994, for Nordauto.

It was time for a change in 1995. Tamara defected from Alfa to the Audi works team, who were keen to buy into the new Super Touring formula. Alongside Hans Joachim Stuck and Frank Biela, she contested the German Super Touring Cup, and some rounds of the European championship, in an A4. She made an excellent start to the season with a string of top-ten finishes, including a fourth at Zolder and third at Hockenheim. However, during the season her performances tailed off somewhat, and she was not the only team member to have this happen. The new car was fast, but fragile, and still had some development to be done on it. Still, her results were good enough for ninth overall in the championship. Italy had not been forgotten: she made two guest appearances in her home Super Touring series, driving a works Audi.

The following year she raced in Germany again, driving the A4 for the Roc Competition AZK team. She repeated her stellar start. In the first three meetings she was placed in the top three drivers. again, she and the A4 could not keep it up for the whole season, but a more consistent year gave her seventh in the championship, her best finish. Her links with the works team remained strong, and they ran her in four Spanish Touring Car races as well.

1997 was a let-down. The other teams had started to catch up with Audi, and Tamara was somewhat off the pace. Her terrible year was compounded by a nasty crash, which led to her replacement in the Audi squad while she recovered. One of the few highlights of this year for her was her participation the Bathurst 24 Hour race in Australia, driving another Audi with Brad Jones. She did not return the following year.

Tamara was not finished with motorsport yet, though. In 1999, she was one of the few European drivers to enter the Womens' Global GT Championship, which supported the American Le Mans Series. The following season she returned to Germany as part of the all-female Sakura team for the Nürburgring 24 Hours. She drove a Honda S2000 with fellow touring car ace Ellen Lohr, Vanina Ickx and 'Ring champion Sabine Schmitz (then Reck).

After this, Tamara became something of an occasional driver. She did very well in the Bercy Kartmasters events for professional drivers, winning a couple of them, and drove in selected touring car races as a guest driver. She was then seen doing some ice-racing for charity in Monaco, beating some of her old Super Touring sparring partners.

She announced her official retirement in 2002, and was off the scene for a while. She reappeared in 2005, unusually in a sportscar, to contest some rounds of the Trofeo Pirelli European Ferrari Challenge.

For the 2006 season, Tamara made a triumphant return to saloon competition, in the Italian Campionato Superstars, a high-profile touring car series. In race two of the season at Imola, she drove a works Audi RS4 to victory against BMWs and Jaguars, a first win for the marque in Italy since 1997. She won two more races during the year, including one at Varano, and was second overall behind Massimo Pigoli in a Jaguar. Throughout the season, she was never off the podium. As well as supporting her Italian winning streak, Audi sent Tamara to Russia, to take part in a few touring car rounds there.

Tamara’s comeback in 2006 looks to have been a temporary one, as she does not seem to have raced full-time since. In 2006, there were rumours of guest drives in an Audi in the Russian Touring Car Championship,  and there are reports of her struggling somewhat with the first two rounds. Apparently, she drove in four races, and was 18th in the championship, but her actual race results are proving very hard to track down.