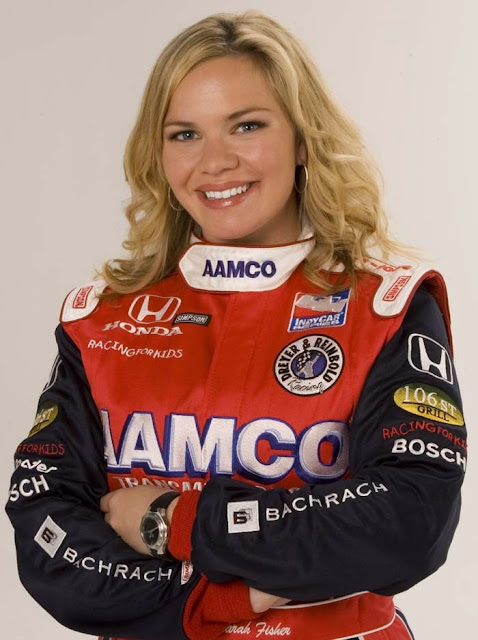 Columbus-born Sarah Fisher was one of the Indy Racing League's best-known drivers in 2001-3, winning the Most Popular Driver title for three years in a row.

Her parents were both involved in the dirt oval racing scene, and their enthusiasm rubbed off on their young daughter. She started competitive motorsport in 1986, at the tender age of five. Her first car was a quarter-midget, and she raced it for three seasons on indoor tracks. She was on the pace very quickly and won a number of races, as well as a track record.

When Sarah was eight she switched to kart-based competition, first on dirt ovals. She sometimes raced at the same meetings as her father, and they usually travelled together.

After making a huge amount of progress in karting, Sarah was ready for the national championships at eleven. Her parents did not push her into higher competition; in fact they had tried to encourage her into other sports and hobbies, with limited success. Her determination paid off handsomely though, as she won the Grand National Karting Championship on her first attempt. The crown would stay with her for another three seasons. In 2004, she also did some endurance karting on some of America's major racing circuits, such as Elkhart Lake.

After learning a good deal from karting, Sarah hit the road with her father and took to sprintcar racing. She moved rapidly through the junior ranks in the World of Outlaws series, winning a Rookie of the Year award in 1995 and an outright championship in 1997. In 1998, she moved in to asphalt racing and took part in three separate championships, winning five major races, and even working on the car herself when her father was injured and unable to perform necessary repairs.

Sarah had always set her racing sights high, and her goal was the Indy 500. She got her chance to prove herself in the big arena in 1999, in the Indy Racing League with Walker Racing. At the time, she was the youngest person to pass the Rookie Test, which she managed with ease, despite her lack of single-seater experience. Her first race, the only one she entered that season, was at Texas Motor Speedway. She started from seventeenth on the grid, but retired on lap 66 with a timing chain failure.

The young Ohio resident was retained by team boss Derrick Walker for 2000. Her programme was expanded to eight races, including the Indy 500. Here, she qualified her Dallara-Aurora in nineteenth, but retired after an accident on lap 71. This came two laps after Lyn St James had crashed out. They were the youngest and oldest drivers on track respectively, and this was (then) the only time in Indy history that two woman drivers had entered the race.

After a string of lower-midfield results, Sarah really made a name for herself at Kentucky, towards the end of the season. She came third overall and was pounced on by the media, both mainstream and motorsport. She had also attracted attention when she tested a McLaren F1 car at the US Grand Prix, the first time a woman had driven a current F1 machine in public for nine years.

The deal with Walker Racing continued into 2001. This time it was for a whole IRL season. After a shaky start at Phoenix, where she retired, Sarah was on the pace. Her second place at Miami was the best of the year, and a female record which stood for several years. Atlanta, the next race, saw her come eleventh, from 18th on the grid. Her second Indy 500 was not a success, ending in retirement, but later in the season she fared better, finishing tenth at Pike's Peak and qualifying in second at Richmond. She ended the year nineteenth overall.

Despite being one of the IRL's most popular drivers, Sarah was struggling to find sponsorship. Walker Racing was not a wealthy team, and could not afford to employ her in 2002 without the extra sponsor's cash. At the start of the year, things looked bleak, but she eventually got a ten-race deal with Dreyer & Reinbold, another small team. Again she started her campaign well, this time with a fourth place at Nazareth. Her second race was the Indy 500, and she surprised many onlookers by qualifying in ninth. However, she was plagued with mechanical troubles and only finished 24th.

Her other best positions were an eleventh at Fort Worth and a pair of eighths at Brooklyn and Sparta, where she also earned her first IRL pole. She was 18th in the final standings.

Dreyer & Reinbold kept the 23-year-old engineering student on for 2003, offering her a full IRL calendar this time. However, this year would not be as successful as the last. Her best result was eighth at Phoenix and her best qualifying place was second at Richmond, although she only came 19th in the race itself. The Indy 500 was pretty much a disaster; Sarah qualified in 24th and later retired. The lack of testing really showed in the number of non-finishes she recorded, and despite winning the "Most Popular Driver" award for the third year running, the press were now turning against her. The amount of bile and vitriol she endured in the following seasons was quite excessive, but she remained strong and usually ignored her critics.

Again, finances let Sarah down in 2004. She was dropped by Dreyer & Reinbold and only competed in one event, the Indy 500, in a one-race deal with Kelley Racing. She was not especially competitive and somewhat out of practice, qualifying in 19th and finishing two places down, in 21st.

No more drives materialised in 2004, and 2005 was shaping up to be the same, when Sarah decided to switch to stock cars. She signed up with the famous Richard Childress team for the Busch Series Grand National Division, a feeder series for the Nextel Cup. At this time, she had one eye on developing a career in Nascar. Driving a Chevrolet, she entered twelve races and acquitted herself well, earning a best finish of sixth at Thunder Hill Raceway. She was also seventh at Mesa Marin.

Despite showing some promise in the Chevy, she decided not to pursue the NASCAR route, and spent the early part of 2006 concentrating on her studies, having switched to Marketing. However, the chance came up to drive in the IRL again, close to the end of the season. Dreyer & Reinbold re-signed Sarah for two races, and she jumped at the chance to renew her acquaintance with the ovals. She also had a female rival now in Danica Patrick, who was still creating a media storm and therefore deflected some of the attention from Sarah, which was probably a good thing. At Kentucky, scene of her previous triumphs, she was twelfth. She was 16th at Chicago in her other race.

Sarah made her full-time return to Indycars in 2007, after Dreyer & Reinbold retained her services. Although the car was reliable enough to get to the end of all but three races, it was not really on the pace, although Sarah herself showed flashes of “what could be”. She finished in the top ten twice mid-season, coming tenth at Fort Worth and seventh at Newton. Mostly, she ran near the back of the field, although she got further forward at Kansas and Chicago, where she finished twelfth. Her return to Indianapolis was solid but somewhat disappointing: she was 18th, after qualifying 21st.

Dreyer & Reinbold released Sarah at the end of the season. After years of struggling for budget, she got together some money to go it alone, launching her Fisher Racing team. On the track, 2008 was another forgettable year. She only made the Indycar start three times, beginning at the Indy 500. She retired close to the end after qualifying 22nd. Much later in the season, she was fifteenth at Sparta and did not finish at Chicagoland.

Fisher Racing remained a going concern for 2009. At the beginning of the season, Sarah entered five Indy races. She joined the series at the Kansas round, and was thirteenth out of 16 finishers. The next event was the Indy 500, which was more slightly positive for her than previously. She qualified 21st and made it to the end of the race in 17th, in front of Mike Conway. She did not attend the Milwaukee meeting, but was 17th out of 24 at Fort Worth. A gap followed, then she was twelfth at Sparta, her best finish of the season. This drive saw her improving ten places on her grid position. After another break, she was fourteenth at Chicagoland.

Fisher Racing also took delivery of a second car in 2009, which meant that Sarah was able to test more fully, with less danger of destroying her race car. This was meant to go some way to making up for her lack of seat time in the past few seasons.

She returned for another part-season in 2010, still with her own team. Out of seven races, she managed four finishes: 17th at Kansas, 15th at Texas and Chicagoland, and 22nd at Homestead-Miami. Although she just qualified for the Indianapolis 500, she did not finish.

With other female IRL racers on the scene, a lot of the media pressure placed on Sarah as a lone woman in the IRL was deflected. Still, she decided to retire at the end of 2010, in order to concentrate on other projects. She continued as the owner-manager of Sarah Fisher Hartman Racing, running one car in the IRL in 2012. She also gave birth to a daughter in October 2011.

The team remained a going concern in 2013, and had a best Indycar finish of second, with Josef Newgarden, and a second car, driven by Lucas Luhr. This arrangement continued in 2014 and 2015, with new sponsors coming on board. However, Sarah relinquished her joint ownership of the team at the beginning of 2016, after the loss of a major sponsor.

Her latest venture is a new karting track.