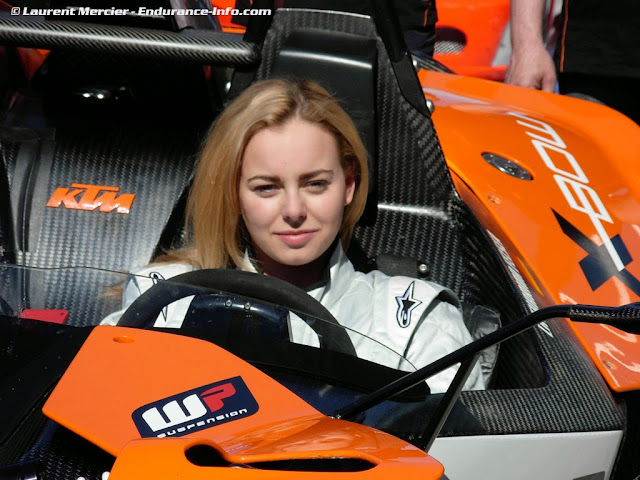 Cathi in the X-Bow

Catharina Felser was born in Germany in 1982. She began karting at the age of fifteen. Just a year later, her pace was enough to win National races. Despite her fledgling sporting career, she remained a diligent student at school and especially excelled in languages - she now speaks five.

The pinnacle of young Catharina's karting career was her trip to the European Championships in Italy in 1999, where she was seventh overall. This was her last big achievement before moving up to car racing.

In 2000, now aged 18, Cathi raced a Formula Ford, mainly in Austria. Her best results were three third places in the Austrian championship, plus another third in a guest race in the German series. She was fourth overall in the Austrian standings at the end of the year.
The following year, she moved back to competing in her home country, full-time, this time entering BMW Formula ADAC, an established training ground for aspiring single-seater racers. It was tougher going, but she did manage eight top-ten finishes against strong opposition. This was enough to give her 15th in the championship.

She did not stay in Formula BMW after 2002, preferring to test herself further in Formula Three. Her first F3 season was a real baptism of fire and she had to fight for every point she scored. To begin with, she was part of the van Amersfoort team. Their car gave her a best finish of 16th at the Sachsenring. A switch to KMS brought a slight but noticeable increase in performance and her best round was Hockenheim, where she was fourteenth and eleventh. her final championship position was eleventh.

Undeterred by her difficult season, Catharina returned to German F3 in 2003, as part of the Trella setup. She was up to speed straight away and came third and fourth in the first round, at Oschersleben. She could not quite match that at the Lausitzring, but still earned a respectable seventh and fifth place. A difficult couple of races followed: she was 14th and 16th at Hockenheim and her only retirement of the year came at the Nürburgring, although she was tenth in the second race of the day. Another couple of tenths at Lausitz brought her back up to speed, and she was ready for her second podium of the year shortly afterwards, coming third and then sixth at Spielberg. This was a good track for her that year, as the next two races there gave her a solid fifth and fourth place. At the final meeting of the season, Oschersleben, she was ninth and tenth. That season was completely dominated by the Brazilian Joao Paulo de Oliveira, but Cathi managed to put together enough points to finish sixth.

Despite really showing some speed in an F3 car, Catharina's racing career took a sharp change of direction in 2004, perhaps due to financial troubles. She moved into tin-top competition, in the shape of the SEAT Leon Supercopa one-make series. It was another difficult year for her, trying to learn a new car and also a new style of driving, and over the year she was consistently in about thirteenth place overall. In the two-driver rounds at the Nürburgring and Lausitz she shared her car with Daniel Bauer, and tended to do much better; her best result of the year was a fifth in the VLN support race at the classic Eifel circuit. Driving solo, her best finish was eighth, at Salzburg, where she also scored an eleventh position. She was 16th in the final standings.

At the end of the season, she tried to give single-seater competition another go, testing a Barber Dodge car in the USA. However, nothing became of the test and she returned to the German domestic racing scene in 2005.

Having tried team motorsport in the SEAT Leon, Cathi moved into endurance racing in 2005. At this time, Mazda were using female drivers to promote their sportscar range in various ways, and the 23-year-old from Uffing was recruited to drive an RX-8 in long-distance events, as part of an all-girl team built around her, Kati Droste and Steffi Halm. They entered selected VLN rounds at the Nürburgring, finishing well in class, as well as other events, as part of the BFGoodrich Endurance Championship. Assisted by the experienced Nicole Lüttecke, they finished their first 24-hour race together, the ADAC Nürburgring 24 Hours. They were 55th out of about 200 finishers and were fourth in their class.

Early in the 2006 season, the team were reunited for the inaugural running of the Dubai 24 Hours. They did not finish this time. Cathi and Kati Droste later teamed up for the Nürburgring 24 Hours. Their co-drivers were Kathi Konig and Christina Surer, and their car was a SEAT Leon Supercopa similar to the one Catharina had raced in 2004. They ended up third in their class, 62nd overall.

After testing a Lamborghini Gallardo at the end of 2005, Cathi finally got to race one of these exotic cars in 2006. She was invited to take part in the Salzburg round of the Divinol Cup and was eighth in both of her races.

Cathi had a quiet 2007. Her mount for this season was almost as far from the fuel-hungry and massively-horsepowered Gallardo as it is possible to be: a bio-ethanol-fuelled Renault Megane RS 26, which was quick nevertheless. Her only big event was the Tuner GP in Germany, although she carried out a number of tests in various cars.

In 2008, one of her tests paid off and she was back to racing full-time. The new KTM team had picked her to drive their X-Bow sportscar in the European Cup GT4 series. She was tenth in her first race at Silverstone, but fifth in the second, beating the sister car of her two team-mates. At Monza she was seventh, eleventh and fifth, again finishing once as the leading X-Bow. At Oschersleben, she was seventh, fifth and eighth, while at Spa she struggled somewhat, finishing twelfth and thirteenth in the first two races and recording a DNF in the third. At Brno she improved slightly, with two ninths and a tenth. At Nogaro, she was sixth, eighth and ninth. This rather inconsistent, but competent season gave her third in the championship's Sports Light class.

Catharina was not retained by the KTM GT4 team for 2009, although she continued to drive for the marque. KTM were keen to test their X-Bows in speed events, and Cathi drove hers to third in class in a company-orgnised hillclimb. She was fifth overall.

In order to market their cars to speed eventers, KTM organised a one-make hillclimb championship in Europe. Cathi was a competitor, as well as a racing instructor to the new recruits. She won the championship.

She has also been developing a TV career in Germany, which appears to have taken priority over racing in 2011. In 2012, she worked as a race reporter covering the DTM for German TV.

In 2012, she was also the team manager for Reiter Engineering, in the Blancpain Lamborghini Super Trofeo and the FIA GT1 Championship. She continued to do some driver instruction and co-ordination for KTM, as well as public speaking and media work.

In 2014, she made a small return to the circuits, as a guest driver in the FIA Lotus Ladies' Cup. She scored a second and fifth place at the Oschersleben round, driving under her own team banner.