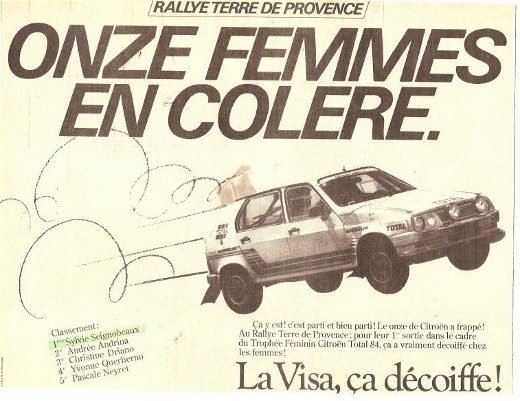 The Citroen Total Trophy ran in France in 1984. It was a “driver search” competition, which began in 1981 and was originally open to both sexes. The women’s edition in 1984 was a one-off.

The drivers were recruited through a series of regional competitions, with the regional winners going forward to the main Trophy competition. According to Sylvie Seignobeaux, the regional winner for Lyon, the trials involved both racing and rallying, motorkhana events and stunts such as driving whilst blindfolded. Eleven women made it into the second phase of the competition.

The Trophy proper was rally-based and ran as its own class in French events. All the competitors used Citroen Visa Mille Pistes models provided by Citroen. There were six rounds, covering gravel and tarmac. The performances of the drivers varied, as would be expected in a group of novices.

The Trophy had a very generous prize fund, with cash awards down to tenth place. The winner was awarded a Citroen works-supported drive for the 1985 season. The runner-up had her 1985 season funded by Citroen.

Sylvie Seignobeaux was the eventual winner, after proving herself to be one of the strongest drivers from the beginning. Christine Driano was second. Both took up their prize drives the following year, although Christine Driano took her rally career much further in the future. Other drivers who emerged from the Trophy are Patricia Bertapelle, who went on to considerable success in rallying and circuit racing, and Florence L’Huillier, who continued to drive in rallies, and later, as Florence Duez, in sportscar races.