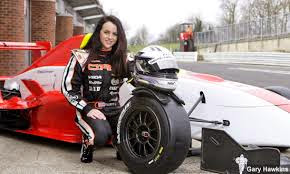 This post is about drivers who have mostly competed in single-seater classes other than Formula One, or Indycars. A few may need to move between categories in the future. Heather Baillie now has her own profile, as do Natalie Goodwin and Ann Moore.

Natalie Butler - former karter and saloon racer who did a season of Formula Palmer Audi in the UK in 2001. More recently, she has won races as part of the Formula Woman female-only motorsport franchise. She represented England in the Formula Woman Nations Cup in 2005, and won the trophy. She did some more Formula Woman races in 2006. Both times, she was driving a Caterham. Previously, she raced an MG in club championships, and competed in karting. In 2014, she raced a Smart in the Birkett 6 Hour Relay, alongside her father. She is now known as Natalie Harris.

Tiffany Chittenden - graduated to Formula Renault part-way through the 2006 season after a long career in karts, although she did not achieve great success. She also tried Formula Ford, but that did not give her the results she wanted either. As a karter, she was a front-runner in National 100 for several seasons. She returned to karting after leaving Formula Renault. For this, she was rewarded with the British Rotax DD2 Championship, and good results in the World and European series, in which she scored one podium place. For 2008, she joined the Wild Kart team for the European Championships. The following year, she tried a few more car races, making two appearances in the UK Porsche Carrera Cup. She finished fifteenth and twelfth. In 2011, she accepted an offer to drive in the AMOC GT4 Challenge series, and won a race at Donington, in a Vantage. She returned to karting in 2012, plus demonstration driving for Abarth UK. In 2015, whilst karting in New Zealand, she got herself a race seat in the Toyota 86 championship. Her best finish was a seventh place, at Manfeild. She was thirteenth in the championship. She returned to karting in 2017 and was second in the Rotax Challenge New Zealand, where she now lives.

Vicky Dyson - has competed in Formula Jedi in the UK since 2004, usually in the 600cc Class A. She scored well in her class consistently. 2005 and 2006 were her best seasons, points-wise. She was sixth in class in 2005 after a strong of top-five places, including one third. After the A class declined and then disappeared after 2007, she has done less well, but continues to compete.


Josephine Ferrada (Van Braeckel) - Anglo-German driver who raced single-seaters in 2009 and 2010. After two years of national-level karting, she raced in the 750MC’s Formula Vee championship in 2009, for two races, aged only 16. In 2010, she did almost a full season of the BARC Formula Renault championship, alongside eventual victor, Alice Powell (they did not drive for the same team). Her best finishes were three eleventh places, at Silverstone and Snetterton. She was fourteenth overall. After that, she does not seem to have competed again, and her website has been taken down.


Logan Hannah - made her senior motorsport debut in 2017. She raced a Formula 4 in the UAE Championship, which runs over the winter season. She was only sixteen when she did her first race, at the Yas Marina circuit in Abu Dhabi. Her results were two sevenths and one eighth place, having finished three of her four races. In 2018, she trained for more F4 races with the Arden team. Logan is a British national but has mostly competed in the Middle East so far. She travelled to the UK for the Walter Hayes Trophy but ran into car trouble with her Formula Ford. In 2019, she raced in the Scottish Formula Ford championship and was fourth overall, with three podium finishes in her 2015-spec Ray. She also raced FF1600 in England, in two Champion of Brands races and the season-ending Walter Hayes Trophy. Back in the UAE and F4 in December, she took part in the non-championship support race for the Abu Dhabi Grand Prix and was eighth and ninth.

Katherine (Kat) Impey - has raced a Formula Jedi in the UK since 2004. Her career began as part of a schools motorsport project, but ended up with her own team, IMPKAT Racing. She won two Formula Jedi 600cc class races in 2006, and was usually on the pace in her class in that championship. In 2008, she combined Formula Jedi with the Monoposto Club Championship and picked up another two wins and a lap record towards the end of the season. She was third in class in the Monoposto single-seater series in 2009, then moved up to club Formula Three. Her best finishes were a string of thirds. In 2011, she raced in the MSV F3 Cup. This was a series of stand-alone races, so no championship tables were compiled. Katherine scored one third place, at Spa, and when she finished, was never out of the top ten. She entered the Oulton Park round in 2012, and recorded two DNFs. The rest of her season was spent as a Porsche driving instructor, a role she continued in 2013, alongside some historic demonstration driving. In 2014, she intended to head to the States to compete in the USF2000 series. It is unclear whether this actually happened. She applied for a scholarship to compete in the VW Cup in 2016, but did not win.

Kirsty Jeffrey - competed in the Formula Palmer Audi Autumn series in 2006. She was 23rd overall. Previously, that year, she had been one of the leading drivers in the all-female Formula Woman championship, in a Caterham. She was scheduled to race in Caterhams in 2007, but did not appear on the start lists.


Bryony King – had her debut season in senior motorsport in 2016, racing in Formula Jedi in the UK. Her best result was a fourth. Throughout the season, she improved her finishes, and she was sixth in the championship. Switching to tin-tops, she raced in the second half of the 2017 Mini Challenge, and was twelfth in the Cooper Pro class. Before beginning her single-seater career, she raced karts from 2010 to 2015, and performed well, despite receiving some injuries in the course of racing. She is supported by the MSA Academy and coached by Alice Powell.

Sarah Playfair - has been competing in Formula Ford since 2003, first in Scotland, where she won races in 2004, then in the UK championship. Her first full season in the UK championship was 2007, and she was seventh overall, driving for the Jamun team. Her best race result was fifth. Previously, she had undertaken some part-seasons in the Scholarship class, combined with some more Scottish Championship drives. She won the last-ever Scottish Zetec race in 2005. Her activities in 2008 were restricted to charity karting events with all-female teams, although she did test a single-seater in Australia.

Clare Redgrave - raced in the UK in the 1990s. According to BWRDC records, she began in 1990. She was mainly a single-seater driver, and progressed as far as Formula Renault, although she did do some saloon competition. In 1993, she was seventh in the British Group N series, driving a Honda Civic for Mardi Gras Motorsport. She is now involved in a different role, as a motorsport administrator.

Emma Selway - a former karter who started racing cars in 2006, in club Formula Renault. Her best result was third. She then competed in the last two rounds round of the National series and all of the Winter Series, with the Eurotek team. In 2007, she switched to Formula Palmer Audi for its Autumn Trophy, and signed up for the full championship in 2008. Her best finish was seventh at Snetterton, and she finished just outside the top ten for most of the season. Her final position was fourteenth. In 2011, she returned to motorsport in the form of the Lotus Elise Trophy. She won two races and was third in another. After a year out, she was set to contest the VW Cup in 2013, but only seems to have managed one round, in a Scirocco. She then switched to motorcycle racing, in preparation for a full season in 2014.


Laura Tillett - started racing in 2012, after a long and successful karting career, which included a trip to the World Championships. She drove in the BARC Formula Renault series, with a best finish of 16th, at Croft. This was her first experience of aero-assisted competition, and she was 26th overall. During 2013, she was not able to race much, but at the end of the year, she put together a deal to go to India and the Middle East, for the MRF Challenge. She entered the Buddh (India) and Bahrain rounds, with a best finish of fourteenth. In 2014, she planned to contest the North Europe Zone Formula Renault championship, but this plan did not come off. She returned to the MRF Challenge at the end of 2014, and had a best finish of seventh, at Bahrain. She was fourteenth overall. In 2015, she switched to touring cars, and took part in the VW Racing Cup. It was a hard transition, and she ended the season in 16th place. Later, she went back to India and the Gulf states for the MRF Challenge. Her best finish, at the start of 2016, was a sixth place, in Dubai. She was fifteenth in Formula MRF, but did not race during the summer season.


Lucy Wardrop – races a Formula Ford in the UK. She began in 1998, winning a racing school championship at Silverstone, and in 1999, narrowly missing out on a scholarship to the La Filiere Elf racing school in France. She resumed racing in 2002, in club Formula Ford races, moving up to the BRSCC national championship in 2003. She steadily improved throughout 2004 and 2005, becoming one of the leading drivers in the series, although she just missed out on a win. Another break followed, instigated by a rule change over Formula Ford engines in BRSCC competition. She reappeared in 2009, when she entered her first Formula Ford Festival, and reached the finals, finishing sixth. Her second Festival in 2010, was even better, and she was second overall in the Zetec class. 2011 started well, but she had a coming-together with another competitor and did not finish the final. She did not finish the 2012 final either, and does not appear to have raced for several seasons. In 2016, she did some more Formula Ford, racing in the FF1600 Super Series at Brands Hatch, and taking part in the Formula Ford Festival.

Amanda Whitaker – multi-champion in Monoposto single-seater racing in the UK, having won the championship three times, between 1996 and 1998. Prior to this, she was a regular in junior single-seater championships, with many podium places and three wins to her name. After a long break, caused by a lack of sponsorship, she returned to historic competition in 2005, driving in European Historic Formula 2. She soon returned to winning ways, claiming the European Formula Atlantic title in 2006. In 2008, she raced historic Formula Fords in the UK, using a Chevron B34. She was third in the final standings. She combined historic and modern club Formula Ford competition in 2009, and added seven further wins to her tally. She won one championship and was fifth in another. 2010 was not as successful, wiht only three wins, but she still managed to race three different cars effectively. In 2011, she took a break from motorsport to have a baby.