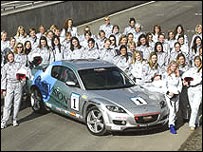 Entrants in the 2004 championship

Formula Woman began in the UK in a blaze of publicity in 2004. It was billed as a unique and groundbreaking opportunity for women to become racing drivers. The series was supported by Mazda, who were using it to promote their RX-8 road car. 16 women, all of whom had to be complete novices, would race identical RX-8s around the UK’s circuits, followed by a dedicated TV programme.

Despite the media fanfare, Formula Woman was both controversial and plagued by problems from the start. Its selection criteria were criticised when it was discovered that applicants were being judged on their “presentation skills”, instead of solely on their driving standards. When rumours suggested that the championship would have a reality TV elimination format, with viewer votes, there was considerable derision. Katherine Legge, who was employed by Formula Woman as a driving instructor, walked out early on, for reasons never fully explained. Sponsors dropped out, and the planned TV coverage was cut to three episodes only.

The series did go ahead, without the elimination votes, although reality TV touches, such as drivers being berated by Tim Harvey and Graeme Glew, the championship bosses, were retained. The championship was won by Natasha Firman, sister of F1 driver Ralph Firman, and her prize was a test in a BTCC car. Natasha went on to do a few races in Britcar later, but claimed that she had entered for fun and had no desire to drive professionally.

Mazda withdrew its support after 2004, but Formula Woman continued using Caterham 7s. A “Nations Cup” ran in 2005, consisting of 2004 graduates and more experienced drivers from around the world. It was won by Natalie Butler of the UK.

The novice-based championship continued in 2006, but with a much lower profile and no TV coverage. It was won by Nikki Welsby. Although more seasons were planned, and advertisements were issued for drivers in 2007, the championship was quietly cancelled. The Formula Woman website was taken down in 2008.

Several drivers from Formula Woman have continued to race around the UK, including Sarah Bennet-Baggs (2004) and Nikki Welsby, but most have either given up or struggled to find sponsorship.