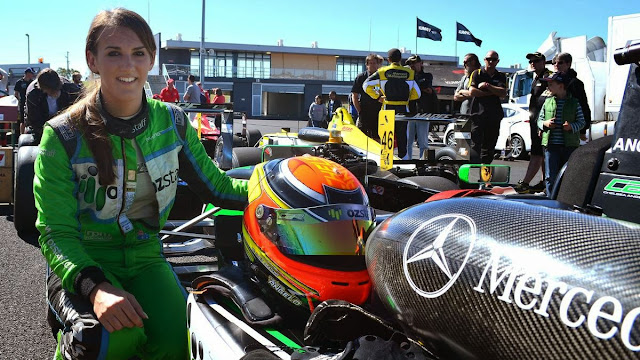 
Lauren Gray, Robyn Hamilton and Christina Orr now have their own profiles.

Chelsea Angelo - raced in Australian Formula 3 in 2014, in the National class, where she was a front-runner. She was either first or second in all of her races, and missed out quite narrowly on the championship. She has been involved in senior-level motorsport since 2012, when she was 16. At first, she raced a Formula Ford in the Victoria state championship,  but that turned into an attack on both the Victorian and Australian championships in 2013. She scored her first outright win in the Victorian series. Her best finishes in the Australian championship were sixth places at Surfers Paradise and Sydney. She was thirteenth overall. Despite her win in the Victorian championship, she was only 15th overall, as she did not do the whole calendar. As well as single-seaters, she has also tested Supercars, and this led to a race seat for 2015, with the THR Developments team. However, this only stretched to the first round, and she sat the rest of the season out. She signed with the Dragon team for the 2016 championship, for the Supercar Dunlop series. After almost a full season, she was 21st overall, getting into the top ten once at Sandown. Her programme was very limited in 2017, with only one major race. She drove a Ford Falcon in the Winton 300 but did not finish. 2018 was spent in the Australian Porsche Supercup, where she was fifth overall. Her best finish was second at Sandown, one of four podium places. After being vocally disappointed with the 2019 W Series selection procedure, she threw herself into the Australian TCR Series, driving a Holden Astra. It was not the easiest of seasons and she had car problems to contend with, as well as being taken out by another competitor in the third race. She sat out the middle part of the season while the team sorted out the car troubles and returned in November at The Bend. Sadly, a first-race crash put her out for the weekend. Her best finish was twelfth and she was 25th in the championship.

Helene Bittner – raced single-seaters in Formula Libre events in the 1960s. She began in 1961, at Mallala, and was soon competing in the Australian Grand Prix, then run as a Formula Libre race, at her home track of Mallala. Her car was a Vitesse-Ford. Sadly, she retired after only one lap, with a broken gear lever. She had more success in handicap races, winning at least two. In 1962, the Vitesse was replaced by the “Rebelle”, also Ford-engined. She continued to race this car until 1970. She competed in three more Australian Grands Prix, and finished one, in 1970, in thirteenth place. These races were part of the Tasman series. Later, she raced historics, still in the Rebelle, until 2011. She died in 2012.

Clara Bond – raced Formula Fords and saloons in New Zealand. Her first races were in the Super Six saloon championship. In 2009, she won at least one race in Super Six, driving a Holden Commodore, at the Teretonga circuit. For the 2008-2009 season, she raced in the MTA and South Island Formula Ford championships, for most of the season. Her best result was an eleventh place at Timaru; she could not quite make the top ten. Her final championship position in the MTA series was fifteenth. Although she announced that she was moving back to touring cars afterwards, she does not look to have raced again. She now appears to be competing in equestrianism.

Belinda Ferrier – raced in Formula Vee in New South Wales in the early and mid-1990s. She was from a racing family, and followed her father, Mark, into Formula Vee, possibly in a car he had built. Her sister is Leanne Tander, who started racing after Belinda had retired. Further details of her racing career are not forthcoming.


Jessica Golding – had one season in Australian Formula Ford, in 2008. It was not a full season, and she did not score championship points. Her best finish was fourteenth, at Queensland. After 2008, she returned to karting for several years. Her motorsport career is currently on hold, while she represents Australia in the skeleton bobsleigh in the Winter Olympics.


Taryn Kugener - New Zealand driver who raced in Formula Ford between 2005 and 2007. She first appears in the 2005 New Zealand Grand Prix, in which she finished twelfth. This was preceded by several years of junior karting. Two years in the New Zealand Formula Ford championship followed, and gave her a fourteenth and nineteenth place overall. She contested the South Island championship during the 2006-07 season and was eleventh. As well as single-seaters, she also raced Minis in 2003 and 2004, and came third in a national championship in 2004. After 2007, she seems to have returned to karting.

Debbie Lester – raced single-seaters in New Zealand in the 1980s. During the 1985-1986 Formula Vee season, she won a race, and the following year, she finished on the podium three times, in the same championship. In 1987, she moved up to Formula Ford. In 1986, she won an Endurance Production Car championship, sharing a car with her brother, Richard. She is part of the Lester motorsport dynasty; current racer, Jono Lester, is her nephew, and her own son, Jaxon Evans, also races.


Janet Pudney - raced in Formula First in New Zealand between 2002 and 2006. Of her three championship seasons, only the 2005-06 one was a full season. She was fifteenth overall. Her previous two seasons were only three-race guest slots. Her best individual performance was probably her run in the 2006 Formula First One Hour Endurance race. She was sixth overall from sixteen drivers. Janet is also known as an actress and model.

Amy Smith – one of New Zealand’s youngest-ever female drivers. She began racing in Formula First during the 2014-2015 season, and was only thirteen years old when she started. In addition to this, she was the only female driver. Her final championship position was thirteenth. Between seasons, she took part in the Formula First One Hour Endurance race, and was sixth. Her second full season in Formula First was interrupted by serious engine problems with her car, necessitating a full engine rebuild. At the beginning of 2016, she was back on the circuits, and was fourteenth in Formula First. The 2016-17 season was her third as a Formula First driver. She improved her final position to twelfth, and also came eighth in the Winter Series. She was sixth in the 2017-18 main series, picking up two podium positions, a second and a third. She returned to Formula First for the 2018-19 season and finished fifth, with one third place at Hampton Downs. She is racing in Formula First again for the 2019-20 season.

Bronwyn Taylor - raced in Formula 5000 in a Repco Holden-engined Matich A50 in 1978. Her biggest race was the 1978 Australian Grand Prix, run that year as a Formula 5000 race, However, she did not actually qualify. Previously, she seems to have done some touring car races. Driving a Honda Civic, she was 17th in the 1976 Rover 500km Group C endurance race. She was sharing the car with Frank Brewster.

Caitlin Wood - began her senior motorsport career in 2013, supported by the Women’s Australian Motorsport federation as one of their most promising young drivers, following a successful karting career. She did part-seasons in the Australian and Victorian Formula Ford championships, earning two fourteenth places in the Australian series. She did more races in the Victorian championship, but was 24th overall. In late 2013, she was selected as Australia’s entry for the FIA Women in Motorsport Scirocco-R shootout, in an attempt to win a VW Scirocco prize drive in Europe. She did not win. In 2014, she contested the Australian Formula Ford championship. It was a hard season for her, but she managed to get into the top ten three times, towards the end of the season. She was 21st overall. As well as her national series, she got some extra seat time in the New South Wales state championship, where she fared better, finishing sixth overall after five races. In 2015, she put together a deal late in the season to run in Australian Formula 4, the first female driver to do so. She was thirteenth in the championship. In 2016, she intended to race for the full season, but ended up in Europe, racing a KTM X-Bow in the GT4 European Series. She was a solid top-ten finisher in the Pro class, sometimes partnering Naomi Schiff. Her best finish was seventh, at Pau, and she was seventeenth in the championship.  She stayed with the Reiter team in 2017, and drove both the X-Bow and their Lamborghini Gallardo. Mostly, she drove the Gallardo in different classes of the Blancpain Endurance Series. She was tenth in the Sprint Cup Silver Cup. She missed some of the 2018 season due to injury but managed the early and late part of the Lamborghini Super Trofeo, racing in Europe. She also did her first Bathurst 12 Hours in the X-Bow, although she did not finish. Sadly, she did not finish the race in 2019 either. The 2019 summer season was spent as a W Series driver in Europe. Her best finish by far was fifth at Assen and she was thirteenth in the championship. She is not racing in W Series in 2020.

(Image from http://www.westernadvocate.com.au/)
Posted by Rachel H-G at 15:34