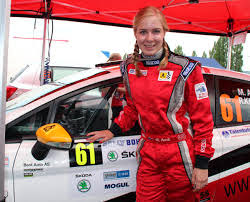 Miriam Aasli, during the 2014 Rally Bohemia

Norway has produced a number of female rally drivers. They tend not to be as well-travelled or well-known as their Swedish and Finnish counterparts, but they do get around.
Between 1960 and 1990, there were many more women competing in Norwegian rallies than there seem to be now.

Miriam Aasli - young driver active since 2011. Her first rally car was a Nissan Almera GTI, a rather unusual choice. She continued to rally the car in Norwegian events in 2012, entering seven, and had a best finish of 28th, in the Stavanger Rally. In 2013, she drove the Almera for most of the year, and was moderately successful, with class wins in the Hedemarken and Sørland rallies. Her only real low point was her only retirement, which came on the Telemark Rally, after the driveshaft on the Almera broke. Mid-season, she did one rally, the Stavanger Rally, in a Ford Fiesta, and was rewarded with her first top twenty finish - a twelfth place. In 2014, she changed over to the newer Fiesta full-time, and achieved two top-twenty finishes from eight rallies: 20th in the Sørland Rally and 16th in the Rally Telemark. She also did her first overseas rally, finishing 22nd in the Rally Bohemia, in the Czech Republic. In 2015, she stuck to the Norwegian championship again, in the Fiesta. Her best result was a 26th place in the Rally Hedemarken, and she was sixth in class. In 2016, she rallied the Fiesta again in the Norwegian championship, and was third in her class. The best events for her were the Rally Hedemarken and the Rally Sørland, in both of which she was second in class and 25th overall.

Wenche Knudtzen - competed mostly in the 1960s and 1970s and through to the 1980s. In the early days, she drove a Saab with Carl Erik Knudtzen, sometimes as co-driver. They scored some class wins in Norwegian events. Later, she teamed up with a series of different co-drivers, and apparently favoured Soviet-built cars, such as the Moskvich she used in the 1972 Daily Express Rally, and the Lada she drove in the RAC Rally in 1982, finishing on both occasions. She drove the Lada in rallies in Norway and Sweden late in her career.

Thea Turvoll Lien - rallies a Ford Fiesta in Norway. She has been active in the Norwegian championship since 2016. Between then and 2018, she was a leading driver in Group N, driving the R1 version of the car. She did best in sprint rallies. The car was upgraded to an R2 model at the end of 2017, which Thea has found somewhat harder; she has had several non-finishes. Her best result in it was 36th in the Sigdal Rally, with a class second. The car was upgraded again to R2T spec at the end of 2018 and Thea branched out into Swedish gravel rallies in 2019. Her best finish was 28th in the Aurskog-Holand Rally and she also won her class in the Rally Hedemarken. She is from a rallying family with brothers who also compete.

Wenche Nafstad - rallied in Norway between 1978 and 1982. She also drove in the (now) Czech Republic, Sweden and Denmark. Some of these rallies were international events, but their full results are hard to find. Wenche was among the front-runners in a "Ladies in Action" class for Scandinavian rallies during her years of activity. Her normal co-driver was Thor Nafstad. She is still active in motorsport administration, as a co-ordinator for the Volvo Original rally series.

Laila Schou-Nilsen – Norwegian driver who rallied in Europe in the 1960s. Between 1961 and 1963, she used Skoda cars in Scandinavian events. The best of these was an Octavia, which took her to ninth place in the 1962 Vinterrally, in Norway. In 1963, she drove a Skoda TS in the 1000 Lakes Rally, finishing 29th. Her last big rally seems to have been Monte Carlo in 1965, in which she drove a Saab 96. In the 1930s and 1940s, she made a name for herself as an Olympic downhill skier, and was an early exponent of women’s speed skating. She died in 1998.

Helene Skau Andersen - active in Norwegian rallies since 2018, driving a Volvo. Her first car was a 242 but she has since switched to a 940. She is a consistent finisher and her best result so far has been a 37th place in the 2019 Rally Aurskog-Holand. She was initially co-driven by her 15-year-old brother, Marius. Prior to her motorsport career, she competed in equestrian events.

Randi Sofie Tangeland - rallied in the 1970s, in her native Norway and Europe. She began as a junior in 1970. Soon, she was finishing well in class, driving a Fiat 850 Special, 127 and 128. She competed internationally between 1975 and 1977, entering the RAC and Swedish rallies in 1976, and the RAC in 1975 and 1977. She also co-drove for Birger Tangeland on occasion, including in international events. Her career continued into 1980, when she drove an Opel Kadett in Europe, including the Tulip Rally.

Heidi Wessel - driver and co-driver, mainly active behind the wheel in the 1960s. Among her earliest rally starts was the 1962 KNA Junior Rally in Norway, driving a Wartburg. She reappears in 1965, driving a Renault R8 Gordini with Trine Wessel, scoring some good positions in Class 5. Later, she drove a BMW 1600, Audi 90 and Alfa Romeo in Norwegian events, assisted by Trine Wessel, Kiss Sorvig and others. She disappears from the entry lists at the end of the 1960s, although Trine Wessel, presumably a sister, continues to navigate for other drivers.