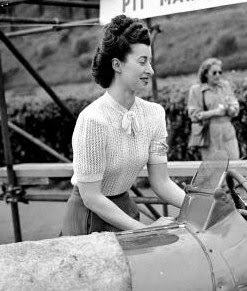 This post covers a few pre-1950 female drivers who do not fit into any of the other categories, chiefly those who competed in British National events in the late 1940s, and one driver who raced earlier, but not at Brooklands. US-based racers of the 1920s can be found here.

Nancy Binns - included in this section as she appeared on the scene in 1949, coming second in three different British National races at Silverstone and Goodwood. Her cars were two different Rileys. The following year, driving a Riley Sprite, she won several races at various meetings at Goodwood, Gamston and Silverstone. She changed to a Jaguar XK120 for the 1951 season, and was rewarded with a second and two thirds at Silverstone, but no wins. After this, she disappears from the entry lists.


Joy Ching – mostly competed in sprints and hillclimbs, but occasionally raced on the circuits. She took part in a VSCC Handicap at Silverstone in 1949, driving a Bugatti T37, but was not among the front-runners. As well as the Bugatti, she drove a BMW and an Alfa Romeo on occasion, both of which she shared with her husband, John, a car collector who raced himself. The Bugatti had previously been raced by May Cunliffe. Joy was a regular at the Brighton Speed Trials in the late 1940s, and usually did well in the Ladies’ classes.


Marguerite Dupêchez – winner of the Coupe de l’Auto Club at the first Journée Féminine de l’Automobile, in 1927. Her car was an Amilcar. The same year, she took part in a Ladies’ Handicap, also held at Montlhéry, and appears to have won. 1927 was not her first year of competition; she drove the Amilcar in the 1926 Rallye Féminin between Paris and La Baule. She was eleventh. In 1928, she competed in the mixed Paris-Nice Trial, still in the Amilcar. After this, she disappears from the entry lists.

Joan Gerard - one of the first lady drivers to resume motorsport after WWII. She was second in a British National race for 1500cc cars at Gransden Lodge, driving a Riley Sprite. Later, she used the White Riley, once raced by Kay Petre, in speed events. She also took part in a Ladies' race at Brands Hatch for 500cc Formula Three cars in 1950, and was third. She always competed alongside her better-known husband, Bob Gerard.


Lady Mary Grosvenor – most often competed in hillclimbs and sprints, but did some racing before and after World War II. Her first major race was a Short Handicap at Crystal Palace in 1939, and she was second, in a Riley. The same year, and in the same car, she was second in a two-lap Scratch Race at Donington. After the war, she raced the Riley, and an Allard, which she used for hillclimbs. She was third in a sportscar race at Gransden Lodge in 1946, in the Riley, and continued to compete strongly in hillclimbs until 1949, using a Bugatti and an Alta as well as the Allard. The Alta, once it had been fitted with a 1500cc engine, would have been eligible for Formula One, but despite having the means, Lady Mary declined to pursue this. Later, she raced a Frazer Nash Le Mans Replica at Silverstone and Goodwood, finishing third in a handicap at Goodwood in 1951. She retired from motorsport in 1953, after the death of her father, the Duke of Westminster, and devoted her time to running the family estates. She died in 2000.


Estelle Lang – raced and rallied in France in the late 1920s and early 1930s. She finished fifth in the first edition of the  Paris-St. Raphaël women’s rally in 1929. The same year, she entered the Journée Féminine de l’Automobile, and was one of the leading drivers, in a Rosengart. In a similar car, she won the 1931 Paris-St. Raphaël Rallye, after winning her class. She was a semi-regular in French races at the time, and a rival to both Violette Morris and Hellé-Nice at different times. In 1930, she entered the Tour de France Auto, in a Rosengart, and won her class at least.


Lilian Heimann-Mayer – raced a 500cc BMW-engined Condor in German Formula 3, in 1949. She managed to finish a race at Schotten, but was not classified. She entered the Kölner Kurs race later in the year, but did not finish. Photographs of her exist at the Nürburgring that season as well, but no results. Later, in 1953, she drove a BMW in the Gaisbergrennen hillclimb, and won her class.

Yvonne Morel - MG owner and racer, active in the late 1930s. She competed in speed trials and hillclimbs mainly, including the 1937 Whitchurch Speed Trial, but also raced at circuits. In 1938, she drove a 1500cc MG at Crystal Palace for the Crystal Palace Plate handicap