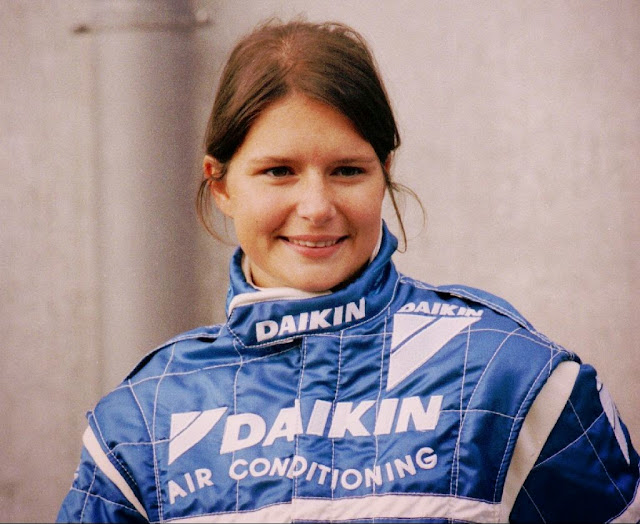 Gent-born Alexandra decided that she wanted to race cars at the age of fifteen. Her father is Christian van de Velde, team owner and driver in Belgium. Most of the family have worked within Van de Velde Racing at one time or another.

Alexandra was eighteen when she made her first actual steps in the world of motorsport, entering the Starters Cup novice championship at her home circuit of Zolder. She continued in this series in 1998 and steered her BMW Compact to seventh in the up to 2000cc class.

Staying around Zolder for the time being, Alexandra enrolled in the circuit's Touring Cup in 1999. She was driving one of her father's cars, a BMW 323. Having learnt the track well in the Starters Cup, she won the class for cars up to 2500cc, with three individual class wins. Overall, she came fifth. That year, she also took part in her first Zolder 24 Hours. Partnered by Vanina Ickx, she was 16th overall and third in class.

The winning did not stop in 2000, either. Now in a BMW M3, Alexandra won her class again, this time the up to 3000cc group. On her second attempt at the Zolder 24 Hours, she was 21st, fourth in class. At this point, she was still combining racing with her legal studies at university.

After a couple of guest drives with Christian in Belgium's big race series, it was time to move up to Belcar full-time in 2001. Still with her family team, Alexandra teamed up with Linsy Lanssens, who had been a Belcar regular for the last couple of seasons. Their car was another BMW, an E46 GTR.

The season got off to a very slow start and the pair recorded DNFs in the first three races. Alexandra sat out one of the Spa rounds, leaving Christian and Linsy to finish 34th. Christian replaced Linsy for the last round, and the father-daughter duo were 45th.

Alexandra continued to race with her father in 2002. They were still in the E46, which was running much more reliably by then. The first race of the season was a welcome success: a class win at the New Race Festival, 24th overall. They were 32nd at the Spa Belpro meeting and 34th at the Nürburgring, before teaming up with Andy Jaenen for the Spa Euro meeting, and coming 22nd, third in class.

An accident put Alexandra out of the Zolder 24 Hours for the first time, but she bounced back at the Spa Racing Festival. Driving a Porsche 993 for a change, she was 30th. In a reversal of fortunes from her early career, Zolder was something of a bogey track for her that year. She and Andy Jaenen failed to finish the last round of the season there, in Andy's last race as a professional. Despite a couple of upsets, Alexandra was twelfth in the overall Touring standings, seventh in class TB, fourth in the Junior class and third in the Ladies rankings.

Although she remained in the same car, Alexandra got a new team-mate in 2003, in the shape of Kelly Jamers. The engine size of the BMW had been increased, and the duo were contesting class TA, for touring cars over 3000cc. They were 24th at the New Race Festival, 27th at the Nissan World Series meeting at Zolder and 28th at Spa Belpro. For the Spa Euro race, they were joined by Christian and finished 28th again. The van de Velde/Jamers partnership had been scoring steady fifths or thereabouts in class TA, showing much more consistency.

The van de Velde team for that year's Zolder 24 Hours consisted of Alexandra, Kelly, Christian and another young Belgian, Stephanie Boden. Unfortunately, they failed to finish again. Stephanie Boden took the place of Kelly Jamers for the last two rounds of the season. She and Alexandra were 26th at Spa Belpro, but did not finish the Zolder Masters.

As well as her Belcar achievements - fifteenth in Touring, seventh in class TA, fifth Junior and second Lady - Alexandra found time for the Mini Challenge, in which she was tenth. It proved useful experience, as the team, now sponsored by Daikin air conditioning, had acquired a BMW Mini S3 for use during the 2004 season. She was reunited with her old team-mate, Vanina Ickx.

From the beginning, when the car went out of the New Race Festival, there were reliability issues with the Mini. It was untested at this level of competition and Alexandra and Vanina could not finish four of their events. However, when the car was running well, it was quick, and its class positions showed it. The pair were third in class TB at the Nürburgring (29th overall) and class runners-up at the Nissan World Series meeting (two 28th places). At the Zolder 24 Hours, they just made the finish, but scooped the Ladies' award anyway. They were assisted on this occasion by Sylvie Delcour and Britain's Fiona Leggate. Alexandra made a return visit to the UK with Fiona, where they raced in a Britcar event at Donington together. They were second in Class Four in Fiona's works MG ZR 190.

The team ended the year fourteenth in Touring, ninth in class TB and first in the Ladies' standings. Alexandra scored her third Ladies' Trophy of the season in the Mini Challenge, despite only coming 18th overall.

The "Daikin Racing Girls" stayed together in 2005, along with their Mini. Their season began with a bang, in the form of a maiden class win for the Mini at the New Racing Festival. They were 20th overall. This was followed up with a second in class (42nd and 29th at the LMES meeting at Spa), and two thirds (25th at the Belcar Masters and 22nd in the Zolder 24 Hours). Extra championship points were accrued for the two pole positions they achieved at the Racing Festival and the Belcar Masters. The only real downer was a DNF at the Brands Hatch round, and a return of last year's mechanical gremlins, resulting in a non-start at the Spa Euro race. The Ladies' Trophy was awarded to Alexandra and Vanina for the second year running and Alexandra was a career-best sixth in Touring, fourth in class TB.

2006 meant a number of changes. Vanina Ickx left the team after being signed up to contest the DTM, which left Alexandra with Caroline Grifnée and Gaby Uljee as team-mates. Both had shared the Mini with her for the Zolder 24 Hours, and Gaby had filled in for Vanina at the Belcar Masters. The Mini was put up for sale and replaced by a Ferrari 360. This was the team's first attempt at the Belcar sports class.

Sadly, the Ferrari was a short-lived investment. Caroline Grifnée crashed heavily in it during the New Race Festival and wrote it off, causing an abrupt change of plan. Thankfully, Caroline was not hurt.

Daikin Racing reappeared at the Zolder 24 Hours with a new car, a diesel-powered BMW 120d. This was the same car that Claudia Hürtgen was using to good effect in Procar races. The team was Alexandra, Caroline, Gaby and German Steffi Halm. It was Steffi's turn to crash out this time, although the car was not seriously damaged.

Alexandra and Caroline returned to the fray a little later, at the Spa Racing Festival. They were entered in the Dutch Supercar event, rather than Belcar, and the change suited them; they won the Sports class convincingly. A return to Belcar for the last race of the season gave them a 29th place.

After the let-down of 2006, Alexandra received a well-earned change in fortunes at the start of 2007. She contested the 24 Hours of Dubai in January, and finished second in class A6 and a brilliant third overall, her first big podium place. She was driving a Porsche 996 RSR for Prospeed with Rudi Penders, Franz Lamot and Stephan Schrauwen. The team had had to battle with electrical problems in qualifying and then fight their way to the front.

Her fortunes in Belcar were also improving. This year, the team invested in a Dodge Viper SRT10, in an attempt on the series' premier class. Alexandra, along with her returning team-mate Stephanie Boden, was 20th in her first race and eleventh in the next, at Donington. At the Spa 12-Hour event, she started on pole and ended in ninth place. She was unable to compete in the next round, and although the Daikin Viper finished the Zolder 24 Hours in 15th, Alexandra is listed as "did not drive". She returned for the Francorchampagne event at Spa, finishing 21st. Unfortunately, the last round of the year ended in a DNF.

In 2008, she remained in Belcar, but broke the habit of a lifetime and joined a different team. Alongside Vanina Ickx, she joined forces with Frederic Bouvy and Damien Coens of Francorchamps Motors, driving a Ferrari F430 GT3. The foursome were fourth in the Zolder 24 Hours. Although this was her only Belcar outing, it was the most successful of her career.

Alexandra does not appear to have raced seriously since then, for reasons unknown.