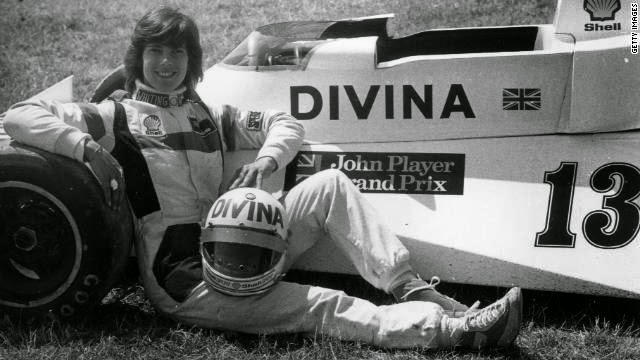 Divina at the 1976 British Grand Prix

Born in Bushey Heath in 1946, Divina Galica had an adventurous childhood spent mostly outdoors, in common with many other speedqueens. She proved to be a competent sportswoman at an early age, but it was skiing rather than motor racing that was her first passion. She was one of the best British female skiers ever and had entered three Winter Olympic games by the time her racing career started in 1974, at the wheel of a Ford Escort. By this time, she was the fastest woman on skis, having reached 125mph on a record run. She was invited to take part in a celebrity Escort race at Oulton Park, and surprised many with a second place.


On the suggestion of Brands Hatch and Shellsport race promoter John Webb, Divina took a driving course at Motor Racing Stables, and at the age of 28 became a full-time professional racing driver, in 1975. She raced both a Ford Escort and a Formula Ford single-seater, coming second in the Shellsport Ladies' Escort Championship and scoring some good overall placings in the main Escort series. All this happened in spite of a disastrous start to the season, when Divina wrote off her Escort Special during her second-ever competitive lap in it.


Not content with saloons and junior single-seater action, John Webb and Nick Whiting took the extraordinary step of acquiring a Formula One car for Divina to use during the 1976 season. She entered the Shellsport Formula 5000 championship in a Surtees-Ford TS16 and delivered the goods once again. At the end of the season she was fourth, with one fastest lap at Donington and one "Driver of the Day" award at Thruxton, awarded for a battling performance in the wet.


What was more remarkable was that she was entering Grands Prix in only her first full year of competition. Her Shellsport/Whiting-sponsored Surtees was out of date and well off the pace and she failed to qualify for the British Grand Prix, but it was a brave effort nonetheless. The Italian Lella Lombardi had also registered a DNQ in the same event, making it the only time that two women had entered a Grand Prix in the modern era.


There were no more GP attempts in 1977, but Divina was still racing hard. The TS16 had now been replaced by a TS19 and she returned to Formula 5000 alongside Tony Trimmer. She was sixth this time and her best performances were a second at Donington and a third at Brands Hatch, where she led for a time. She and Trimmer also scored a number of joint fastest laps. In addition to single-seaters, the enterprising Brit was now racing sportscars as well, and she was runner-up in Sports 2000 driving a Lola.


1978 was a very mixed year. Divina was back driving a Surtees TS19 F1 car for selected rounds of the Aurora F1 Championship, and was an excellent second at Zandvoort in the Netherlands. She was also seventh at Thruxton in the same car. However, Formula One proper was beckoning again. She had secured sponsorship from Olympus Cameras and the Hesketh team, which had had so much success with James Hunt previously, provided a car for her. She decamped to South America for the Argentine and Brazilian rounds of the championship. Unfortunately, she failed to qualify for either race. She did manage to start the non-championship Daily Express Trophy at Silverstone, but did not finish, like her team-mate Derek Daly. Hesketh was by this time without its founders, Lord Hesketh and Harvey Postlethwaite, and did not last much longer. This was also the end of Divina's involvement with Formula One, but certainly not the end of her racing career.


Moving north, she tried Formula Atlantic in Canada, and steered her Chevron to fifth overall, then moved back to England for the 1979 season. She stayed with the powerful single-seater racing she loved and acquired a Hart-engined March, which she used for Formula Two competition. Her results were unspectacular apart from one drive in the Hitachi Trophy at Brands Hatch. Despite a one-minute time penalty, she was able to clinch second spot.


Sticking with the same car in 1980, she continued to enter Formula Two races and also took part in some Aurora F1 rounds. This time she was overshadowed by the success of another lady driver, Desiré Wilson, but she was still a respectable sixth at Oulton Park and ninth at Silverstone. F2 was more disappointing; the normally-reliable March suffered tyre trouble during the Marlboro Trophy at Silverstone and put her out of the race.


For the next few seasons, the former Olympian accepted drives in a number of vehicles and championships. She took her March F2 car to Japan for a time, and also took up sportscar racing again, in enduros and shorter races. By 1985, sportscars had become the focus of her competition career. She and Gary Brabham drove a Shrike for TechSpeed Motorsport in the British Thundersports series. Their best finish was fifth at Oulton Park and they came second in their class five times.


After a quieter 1986, Divina returned to Thundersports in 1987, mainly piloting a Fulmar Racing Royale RP42 with Mike Taylor. They scored some good midfield finishes, mainly around the sixth place mark. However, when Divina changed to an Ibec car for the Oulton Park round, she was fifth - her best finish.


Truck racing was Divina's next challenge. She took to the trucks like a duck to water and carried off the British Class A title two years in a row, in 1988 and 1989. She also entered some European truck racing meetings, but the results have proved difficult to find.


Never shy of a change of direction, Divina's next move was pretty extraordinary. After more than fifteen years as a racing driver, she returned to her first love: skiing. At the age of 46, she qualified for the Albertville Winter Olympics in 1992 and went on to set some more hair-raising ski speed records, including a 120mph run that would rival her four-wheeled antics.


After the Olympics, she moved to America and was involved in motorsport administration and training. Along with Don Panoz and Lyn St. James, she was instrumental in setting up the Womens's Global GT Series, a one-make sports-racing series for women which supported the American Le Mans Series. The WGGTS attracted some good drivers from the USA and Europe and was successful in its first year. Divina raced one of the Panoz cars herself and came away with two wins. She entered the WGGTS again in 2000, and at the end of the season, decided to race in the main ALMS draw too. Divina, plus Americans Cindi Lux and Belinda Endress, entered a Porsche into the ten-hour Petit Le Mans race at Road Atlanta. They qualified in 37th and came home 20th overall, sixth in class, to the delight of many female fans.


After the WGGTS was disbanded in 2001, Divina returned to her role as a senior instructor for the Skip Barber Racing School. However, she had never retired completely and still likes to test herself a few times a year, often in historic races. In 2005, she dusted off a March F2 car and pedalled it to third in the Zippo US Vintage Grand Prix. In modern machinery, she raced a new Mini with Julie Allan for DWD Racing, in the Grand-Am Cup.


Despite being in her seventies at the time of writing, Ms Galica shows no sign of slowing down. She still competes in historic races in America on occasion, and is both a director and a writer of iracing.com, a US-based motorsport news site.