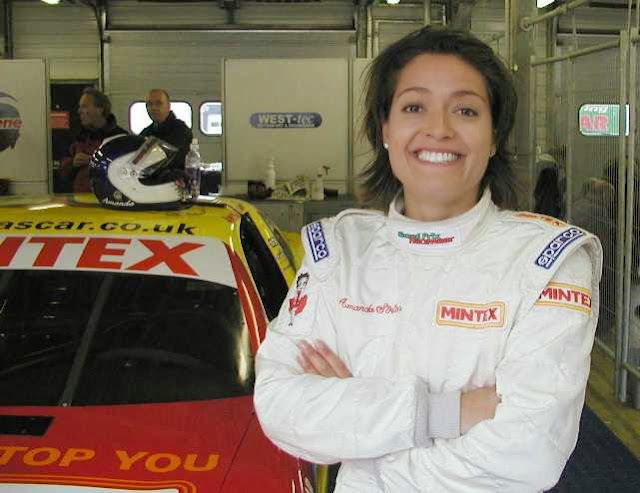 Viewers of Channel 4 Motorsport and Channel Five's Dream Machines will recognise Amanda's name from her broadcasts. However, she is more than just a TV presenter (and live motorsport commentator). Some will have seen her stints behind the wheel in international sports and GT races, or even her early days as a historic racer.


Amanda's father, Terry Cohn, was a classic car enthusiast, but not really a racer. He collected Rolls-Royces and other cars, including a Lagonda, which Amanda raced at Silverstone after his death. Her early interest was in motocross, and she was an enthusiastic competitor until her teens, when her bike was confiscated by her parents after she was caught smoking at school. She waited a few years and earned her car racing licence at nineteen.


It was a couple of years before she had any budget to actually race. Her first car was a BMW saloon, which she entered in hillclimbs and the occasional race as part of the Midland Auto Club in 1994. Staying mainly with hillclimbs, she moved on to a vintage Frazer Nash the following season. It was in this car that she crashed heavily at Silverstone. She was thrown from the car and received a broken arm. After that, she was a more cautious, but also a better driver, having learned from her painful experience.


Between 1995 and 2000, Amanda competed in a variety of historic vehicles in the UK and Germany. She travelled with her then-husband Martin Stretton, sometimes racing against him. Over the years, she drove the Frazer Nash Le Mans Replica, an Alfa Romeo Monza from the 1930s, a Widi sports-racer, Lotus 23, Maserati 150S and an HWM-Jaguar. She took part in some high-profile events, such as the Goodwood Revival and Festival of Speed, the Coys Historic Festival and VSCC races. Her driving style attracted some attention even then; she was voted Best Newcomer in the 1997 Classic and Sports Car awards.


By 2000, Amanda's presenting career had taken off and her racing was becoming more high-profile. She had acquitted herself well in a Frazer Nash in a British Grand Prix support race for 1950s sportscars and at the Goodwood Festival of Speed in the summer. It was now time for a move into more modern machinery. Her first foray into more up-to-date competition was a round of the Loctite Rallysprint Championship, a substitute for stage rallying laid on due to the foot and mouth outbreak. She also took part in a Ford Fiesta race for Maxi Jazz Racing. Team principal, musician Maxi Jazz, assembled an all-female line-up to drive in a Fiesta Championship round at Silverstone, in aid of a cancer charity. Plenty of money was raised and Amanda was fifteenth overall, and second lady, behind Helen Moore, who had more experience of the car. F1 presenter Louise Goodman did not fare as well.


In 2000, the opening of the Rockingham Motor Speedway in Northamptonshire brought US-style stockcar racing to Britain. Amanda got in on the act, both behind the microphone and behind the wheel. She presented the accompanying TV programme and drove in the races too. In her first season on an oval, she was sixth overall in the Mintex ASCAR Championship. Her only non-finish came after a bad spin in the last round, and her best result was fifth in round two, out of 22 drivers. With her Betty Boop-decalled car she earned the nickname "Babe Racer" and won many fans. She was due to contest the first full season of ASCAR in 2002, but fell pregnant and sat out the season.


After the birth of her daughter Mia, Amanda was soon back out on the circuits. She embarked on her most ambitious challenge yet: the British GT Championship. She struck a deal to race a Chrysler Viper for CMS Racing, as part of an all-female team. Former touring car pilot Annie Templeton came on board, with Vicki Butler-Henderson on standby for the longer races. The eventual aim of the team was to qualify for Le Mans.


Amanda and Annie were eleventh at Donington, seventh at Snetterton and sixth at Silverstone, all against experienced GT drivers like Martin Short and Piers Johnson. Unfortunately, funding for the "Girlpower Racing" team ran out, and Silverstone was its last competitive appearance. It was commented on that Annie Templeton was not on the same level in the car as Amanda, who scored a number of class fastest laps.


Ever-optimistic, this was not the end of Amanda's season. She still hoped to enter Le Mans the following year, and used all of her influence to earn more drives. She returned to British GTs for the Spa-Francorchamps round, driving a Porsche 911, with GT regular Liz Halliday and teenage racer Tom Shrimpton. They made history by winning the GT Cup class, a first for a woman and in Tom, the youngest ever winner. They came fifteenth overall. On the back of that success, she gained an entry into the Donington round of the World Sportscar Championship. She shared her Lola B98/10 Judd with her partner Bob Berridge, and ran as high as third overall in the six hour race. Twenty minutes before the end, they were in fifth and their engine gave up on them.


Her performance at Donington was enough to win her a seat in Berridge's Chamberlain TVR sportscar team. Two cars were entered into the inaugural Le Mans 1000km, for one male and one female team. Amanda teamed up again with Liz Halliday, and Fanny Duchateau stepped in when her countrywoman Vanina Ickx dropped out due to illness. They finished a respectable 19th overall, very close to their male counterparts. Team boss Richard Chamberlain agreed to keep the team on to compete in the Le Mans Endurance Series in 2004, with a view to entering the famous French enduro in the summer.


Amanda became the figurehead of "Les Femmes pour Le Mans" and used her TV fame to get some publicity for Chamberlain's team. It was still looking good at the start of the 2004 season, when she competed in the Sebring 12 Hours in the TVR, finishing the race in 24th overall after gear problems. Previously, she and her team-mates, Christopher Stockton and Gareth Evans, were holding a good position in the GT class.


However, Amanda's Le Mans hopes went on ice for another year after she found out she was pregnant again. She did return after her "maternity leave", taking part in the Silverstone round of the LMES with Balba Camino of Spain. Their Judd-powered Lola B98/10 developed mechanical trouble fairly late in the race, after an accident during Amanda's stint. The team was unable to finish after running well in class.


After a lay-off from competitive motorsport and a reduced TV schedule, Amanda finally made the hallowed Le Mans start in 2008. She was driving for the Chamberlain-Synergy team alongside Bob Berridge and Gareth Evans. The car was a Lola-AER B06-10 and it was running in the LMP1 class. Unfortunately, it developed engine trouble early on and spent several of the 24 hours in the pit garage. Matters were made worse when Amanda had an off-track excursion after a spin. She managed to carry out an emergency repair and adjust the dampers to lift the broken wheel off the floor, guiding the car back to the pits, but it was not enough to secure an official race classification.


After that, she returned to her roots with some classic sportscar racing in the Top Hat series. She also helped to run the Chamberlain team for some time, before concentrating on her broadcasting career for several years.

Amanda came out of retirement for the 2014 Goodwood Revival, as well as doing her regular presenting slot for the TV coverage. She drove a Jaguar MkII in the St Mary's Trophy, but it was not one of the faster cars on the grid, and she finished near the back. She returned to the Revival in 2015, in the same car, and has now become a St Mary's regular.

(Image from www.fiestaturbo.com)
Posted by Rachel H-G at 08:38