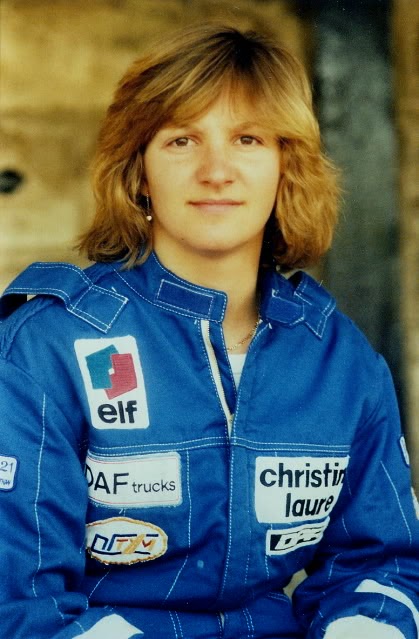 France's Cathy Muller had a promising start to her racing career. She competed, mainly in single-seaters, between the ages of twelve and 33, and showed that she had the talent to go far.


Her first victory came in the European Karting Championships in 1979. She remained in karting for a further year before switching to cars in 1981, when she raced first a Renault 5 and then a Volant Elf single-seater. After a learning year, she carried on the Renault connection and drove in French Formula Renault. She scored her first win at Le Castellet that season, as well as four podium positions.

Cathy continued to progress up the motorsport ladder rapidly. Moving up to Formula 3 with David Price Racing and Ecurie Elf, she jumped straight into the European championship. Her best result was a fourth place, at Le Chatre, and she also achieved seventh places at Magny-Cours and Zeltweg. She attempted to qualify for the Monaco Grand Prix support race, but could not make it. In November she was eleventh in the Macau Grand Prix race, one of only a handful of women to have ever taken part.

By 1984, she was challenging for wins in Euro F3. Driving first for the Scuderia dei Longobardi team, then MC Racing, she finished the season tenth. Her season had begun well, with a seventh at Donington, and she qualified for the Monaco race this time, finishing in eighth place. Her best championship finish was another fourth, at Knutstorp, but she was comfortably in sixth or seventh for most of her races. Her best finish of the year was due to a guest appearance in the French championship, at Albi, where she won.

She also had her first taste of major sportscar racing, driving a BMW-powered Gebhart JC843 at Sandown Park in Australia. Her team-mates were Margie Smith-Haas and Sue Ransom.


At that time, the British F3 championship was the place to be for aspiring stars, so she decamped to England for a year to drive for David Price Racing in 1985. Although she did not achieve any top-three places, she was still ninth overall. Among her results, which are hard to find, she was seventh at Zolder, ninth at Spa and did not finish at Zandvoort. A trip to the Monaco F3 race ended in another DNF.


Feeling she had learned enough from F3, Cathy climbed the next rung in 1986 and moved into Formula 3000, the last step before Formula One. However, the swift hike in budgetary requirements hit her hard. She could only muster the funds for a part-season with three different teams, with no testing. In her first race at Spa, she came 17th. She was also 17th at Mugello and Le Mans, retired at Imola and failed to qualify for the other four races she entered.


Perhaps disheartened by her experiences, she went back to Formula 3 the following year. Back with MC Motorsport in the French championship, she started her season with a tenth at Nogaro. It took her a while to get back up to her usual pace, having missed out on a lot of racing in 1986, but towards the end of the season, she was back in the top five. Her best finish was fourth, at the Le Mans Bugatti circuit, and she was fifth twice, at Nogaro and Lédenon.

Cathy also entered one race in Germany, and drove a Porsche 962C in a round of the World Sports Prototype Championship at the Nürburgring 1000km. She, Bernard de Dryver and Jurgen Lassig were seventh.


She had another stab at F3000 in 1988, resulting in a DNQ at Jerez. It was time for a different challenge now, so she went to America and drove in single-seaters there for two seasons, as well as competing once more in French F3. She entered nine Indy Lights races between 1989 and 1990 and four of these ended in top-ten finishes. The best of these were two fifth places at Meadowlands and Toronto in 1990.


This led to a drive at Le Mans in 1991. She shared a Spice Ford with Desiré Wilson and Lyn St James, but the team crashed out early on. She also tried ice-racing, in the Andros Trophy.


After a season's break, Cathy entered the Peugeot 905 Spider Cup in 1993. This was a popular one-make sportscar series in France. In her first season she was fifth, but in her second, she was the runner-up, winning three times.


Remaining with sportscars, Cathy took part in the Ferrari Challenge in 1995 and continued her winning streak. She finished the season in second. It was on this high that she decided to retire from racing and start a family.


Motorsport was not forgotten completely: in 1998, she tested a Ferrari for her old team, to still whether she could still handle it as a mother. It turned out that she could, but after over 20 years, Cathy did not wish to race any more. She was now content managing her own team, and acting as her brother Yvan Muller's manager.

In 2010, she made a partial return, taking on two guest races in the SEAT Leon Supercopa, at Magny-Cours. She was fourteenth and fifteenth. In 2011, she also ran in two rounds of the Andros Electric Trophy, at the Pau event. She was eighth in one race, and did not finish the other.

She is now involved in motorsport management once more, for a WTCC team. She is also a member of the FIA's Women in Motorsport Commission, working as a talent scout.
Posted by Rachel H-G at 14:19