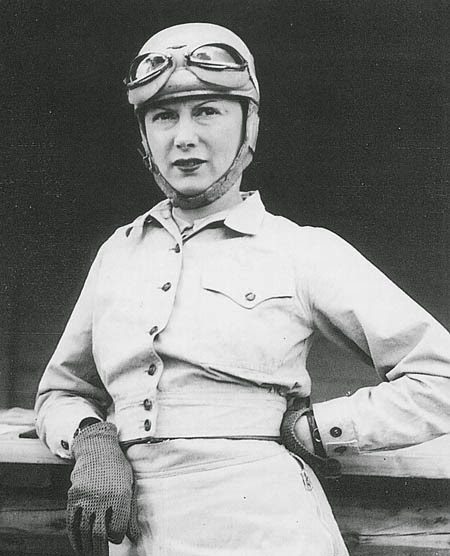 In a career spanning over 25 years, "Madame Itier" proved a lot of people wrong. After successfully leaving a bad marriage, she began racing in 1926. Her first event was the Paris-Pau road race, and she drove a Brasier. For the rest of the 1920s, she concentrated mainly on rallies and hillclimbs. She won the La Mothe-Sainte-Heraye hillclimb outright, an achievement she would repeat in 1932. 1928 also saw her on track for the Grand Prix Féminin at Montlhéry, a prestigious ladies' race.

At the turn of the decade she turned her attention to the circuits and competed in cyclecar races, the smallest major racing class. These lightweight vehicles were quick and the races were dangerous and very competitive. Anne-Cécile equipped herself with a Rally SCAP, in which she scored some good results. She was fifth in the Bordeaux Grand Prix in 1929 and third in the Oranie GP the following year.


Between 1931 and 1936, Madame Itier made a name for herself racing Bugattis, normally in the smaller Voiturette class. At first, she was disparagingly referred to as a "mobile chicane" by her peers, but she soon had them eating their words. In 1931, her first year in her Bugatti T37, she was seventh in the Tunisia GP, fourth at the Circuit du Dauphine and third in the Marne GP. The following year, she earned her first win, in the Trophée de Provence, improved her Tunisian finishing record to fifth and came fourth at Casablanca.


She kept up her winning ways in 1933 with a victory in the Picardie GP, still in the T37. She was also fourth at France's Albi track and fifth in the Lemburg GP in Poland. Driving a T39A with Jose Scaron, she was eighth in the Dieppe GP.


A switch to a Bugatti T51 bought mixed fortunes in 1934. Anne-Cécile won the Phare hillclimb outright and was third in the Picardie GP, but only managed eighth at the Eifelrennen at the Nürburgring, and ninth in the Swiss Berne GP. However, these were big races and she was nowhere near the back. She was sixth in a heat of the Vichy GP, but did not make the final.


For the following year, she continued to campaign the T51, but raced a Fiat Balilla as well, mainly in sportscar events. In the Bugatti, she failed to finish the Marne GP but was sixth in Picardie, eighth at Comminges and third in the Grand Prix des Frontieres. In the Fiat, she was second in class in the Marne Touring GP and 18th at Le Mans, alongside Robert Jacob.


Madame Itier was a fixture at Le Mans from 1934 to 1939. Her first race was in an MG Midget P; she and Charles Duruy were 17th. In 1937 she made history by racing the first-ever fully-closed GT car at the legendary track, the futuristic-looking Adler Trumpf. It proved a little too ahead of its time and failed to finish. Her best finish was twelfth in 1938, driving an MG Midget Special with Bonneau. In 1939, she and Suzanne Largeot went out early on in a Simca.


In 1936, she carried on driving her T51 and picked up another third in the Grand Prix des Frontières. She was also seventh in a heat of the Picardie Voiturette GP, but did not qualify for the final. She was unclassified in the same race in 1937 and could only manage ninth in a heat of the Swiss GP.


Towards the end of the decade, she moved back to rallying, although good results in sportscars still came her way. She and Germaine Rouault were third in the Paris 12 Hours in 1938, driving a Delahaye, and she had a good run at Le Mans. Anne-Cecile sometimes co-drove for Kay Petre in her Austin and often rallied with German driver Huschke von Hanstein. The pair met when Madame Itier was lost in the dust on the Moroccan Rally, and von Hanstein rescued her. It was in his Hanomag diesel that she finished her last pre-war event, the 1939 Monte Carlo Rally.


During the war, she showed as much strength and bravery as she had done on the track, helping to evacuate children from occupied France. When peace returned to Europe, her hunger for competition was undiminished. After a couple of unsuccessful sportscar outings in the ageing Fiat Balilla, she turned full-time to rallying in a Renault 4CV. For her first event, the 1948 Monte Carlo Rally, she was co-driven by fellow 1930s race starlet, Hellé Nice. They crashed out. Anne-Cécile was undeterred and returned every year to the Alpes Maritimes until 1953, when she hung up her helmet for good, aged 58.


That was not the end for Madame Itier. She was involved in French motorsport administration until the 1960s, mainly with the association for independent drivers which she founded with Jean Delorme in 1935.

(Image source and date unknown)
Posted by Rachel H-G at 14:21