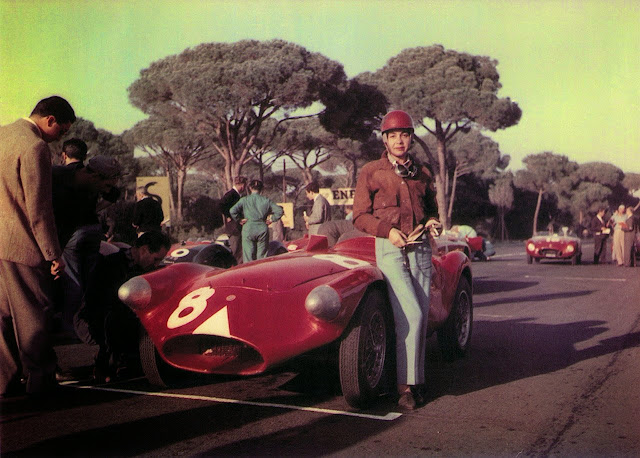 Anna Maria with the Stanguellini

Anna Maria Peduzzi enjoyed a lengthy motorsport career spanning almost thirty years. She was born in Olgiate, Italy in 1912 and started racing very early, in the first years of the 1930s. She married Gianfranco Alessandro Maria Comotti, always known as Franco, in 1932. He was also a racer and the couple were team-mates occasionally. Franco was known more as a test driver and Anna Maria was definitely more the competition driver of the two.


Her career began in local races and hillclimbs. In 1932, she is recorded as having set the third fastest time in class F of the Gaisbergrennen hillclimb, driving an Alfa Romeo 6C. Here, she was credited as "Marocchina", rather than her full name. "Marocchina" means "Moroccan girl" in Italian and her nickname reflected her dark skin and black hair.


Anna Maria's first major race was the 1934 Mille Miglia. She and Franco were sharing the Alfa Romeo 6C she had raced the previous year. They won the 1500cc class and were thirteenth overall, a good debut. They were driving for the recently-formed Scuderia Ferrari. This was Anna Maria's only attempt at the classic race, pre-war.


"Marocchina" raced around Italy throughout the 1930s, in local championships and speed events. Exact details of her activities are sketchy. At some point in her life, she contracted polio, from which she made a good recovery, and this may explain some of her absences from race records. It is believed that this happened prior to World War II.


The Second World War put a stop to all motorsport activities in Europe in 1940, meaning an enforced hiatus for all drivers involved. Franco was a committed anti-Fascist and was almost executed for his resistance work during the war, which must have been very frightening for Anna Maria. I have never read that she was involved in any resistance activities herself, but it is feasible that she helped in one way or another.


After the war was over, things took a while to get back up to speed, but by the time we meet Anna Maria again in 1952, motor racing was back to normal. This year, her vehicle of choice was a 750cc Stanguellini. It proved to be an excellent car. Competing around Italy, she scored some very good finishes. At Montauban, she came fifth in her heat and seventh in the final. The Coppa Ascoli followed the same format and yielded a second in the heat and a third in the final. She was fourth in both rounds at Collemaggio.


The Circuito di Senigallia was probably her best race of the year; she was second in the 750cc event to Salvatore Casella, another Stanguellini pilot. Her next event was the legendary Pescara 12-hour road race, which she failed to finish, but she made up for that somewhat by winning her class at the Trofeo Sardo. At the Bari Grand Prix she was fourth.


It was not all good news for Anna Maria in 1952; in the Eifelrennen 750cc race she was disqualified from her class win for receiving a push start from a bystander. This was considered unfair by many, as Anna Maria's polio had left her with a weakness in her arms, making her unable to push her own car.


Wisely, she stayed with the Stanguellini for the 1953 season. This year, she appears to have concentrated on a smaller number of big races. The highlights of her year were a third in class in the Giro di Sicilia with Augusto Zocca and another third in class in her second Mille Miglia. Her car was shared with Franco Goldoni this time and they were 117th overall, out of 283 finishers.


Anna Maria's first Targa Florio was a difficult introduction, and she retired following an accident. This did not prevent her from returning the following year, in the Stanguellini. She did not manage to finish this time either, but her exit was less dramatic.


The rest of 1954 was a mixed bag. She and Augusto Zocca teamed up again for the Giro di Sicilia, but did not finish. Driving solo, she was third in the 750cc class at the Circuito Santa Gorizia and later won that class again in the Trofeo Sardo. She was less successful in the Giro della Calabrie, coming fifth in class this time. The Castelfusano 6-hour race gave her another third in class. The Mille Miglia saw her driving with Franco Goldoni again. They did not finish.


The Stanguellini continued to be Anna Maria's mount for the 1955 season. She revisited some of her previous haunts and ventured to new tracks as well. Her attempt at the Mille Miglia was more successful than the previous one; she and Augusto Zocca were 99th, fifth in the 750cc class. She was second in the same class in the Circuito di Gorizia and fifth overall in one of the two races she contested at Mugello. The other result has been lost, although it is known that she was on the start list. For a greater challenge, she entered her car into the up to 1100cc class event of the Circuito di Reggio Calabria and was seventh. Her second race in that region, the longer Giro di Calabria, resulted in a DNF.


For most of 1956, the lady from Olgiate raced a 2000cc, four-cylinder Ferrari 500 TR, the only one of its kind built. For her first major outings in this powerful machine, she formed a team with Gilberte Thirion of Belgium. They were tenth in the two big races they did together, the Paris 1000km and the Supercortemaggiore Grand Prix. In Paris, they also scored a 2000cc class win. Back in her native Italy, Anna Maria was ninth in the Circuito di Reggio Calabria and unclassified in the Circuito di Sassari, after coming fourth in her heat. For her last big race of the year, she changed her car for a Stanguellini S1100 and was eighth in the Roma GP. Throughout her career, Anna Maria was always very patriotic with her choice of cars, racing Italian models almost exclusively.


In 1957, she took a break from international competition. She retained ownership of the Ferrari and returned with it the following year. Again, she was rather selective with her events and chose to partake in a few bigger races rather than lots of minor ones. At the beginning of the season, she was eleventh in the Pergusa GP. Later on, she tried her hand at the Targa Florio for the third time, driving with Francesco Siracusa. They did not make the finish. In between, Anna Maria was scheduled to drive in the Buenos Aires 1000km, which would have been her furthest trip abroad. However, for reasons unknown, she did not go to the race herself. The Ferrari was crewed by Gino Munaron and Luciano Mantovani instead. For some reason, she rarely raced outside Italy at any time during her career.


Her career continued in the same vein in 1959. Using the Ferrari and a 750cc OSCA prepared by the Scuderia Saint Ambroeus, Anna Maria, who was now 47, entered a small selection of the bigger Italian races. In the Ferrari, she was third in the 2000cc section of the Coppa Ambroeus at Monza, and unclassified at the Messina GP. In the OSCA, she was 20th in the Targa Florio with Giancarlo Rigamonti. They were third in the 750cc class.


The Ferrari was retired in 1960. Anna Maria contested her last Targa Florio in another OSCA, this time a 1500cc F2 model. She was driving with Francesco Siracusa, also her partner in 1958. They were 17th overall, third in the class for cars under 1600cc.


Her other race that year was the Coppa Ascari at Monza. Her car this time was a little 600cc NSU Prinz and her co-driver was Luisa Pozzoli, another female sportscar ace who had competed against Anna Maria in previous years. They were fifth in class, 26th in the main standings.


Her last year of competition was 1961. The only major event she entered that year was the Coppa Ascari. She and Alma Cacciandra failed to finish in the Alfa Romeo Giulietta.


Throughout her lengthy career, Anna Maria competed against a good many future Grand Prix drivers and more than "held her own". Interestingly, someone she often raced against in the early 1950s was Maria Teresa de Filippis. The older Anna Maria sometimes beat the future Formula One driver and it is interesting to speculate what would have happened if Anna Maria had shown interest in single-seater racing, or travelled more widely to events.


After her retirement from the racetrack, Anna became a wholly private individual, and rather reclusive. Her date of death is not even widely known.