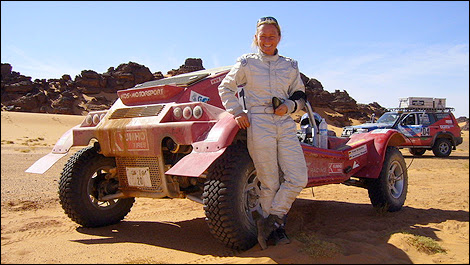 Women have excelled in some of the toughest motorsport disciplines on Earth. Cross-country rallying must rank among the most extreme forms of motorised competition, and motorcycle rally raids even more so. Much like her compatriot Jutta Kleinschmidt, Andrea Mayer of Germany started her competition career on two wheels, before moving to cars.


There are a lot of similarities between the career paths of Andrea and Jutta. Both came from an academic background. Andrea trained as a journalist and was lucky enough to combine her job with her love of motorbikes, becoming an international writer for the motorcycle press. When he work took her to the terrain of Africa, she was inspired to start competing in enduros and rally raids, after enjoying a long trip across the continent. Her first event was in 1989. She stuck to European races to begin with, but she soon found her feet and was back traversing her favoured sand dunes.


After proving herself to be a quick and astute rider, she was picked for the BMW works team in 1997. There she remained until 2001, picking up Ladies' Awards in almost every event she entered and scoring some fine overall placings. Her best-ever finish was sixth in the UAE Desert Challenge, a raid she entered five times. She was also seventh in the Rally of Egypt, another Saharan rally. In smaller motorbike rallies in Scandinavia and Europe, she finished in the top three many times.


BMW pulled out of rally raids in 2001, after the death of its star rider, John Deacon. Andrea carried on in bikes at the dominant KTM team for another year, but the deaths of so many of her friends and team-mates were a big factor in pushing her towards cars. She had been a team-mate to Deacon, and his death affected her badly.


Andrea's desert prowess was known to the major raid teams and she was soon snapped up by the Mitsubishi squad to drive a Pajero in a selected programme of rallies. She did not disappoint, coming 17th in the Orpi Morocco Rally and tenth in the Tunisian Optic 2000. On home soil in Germany, she came a fantastic second in the non-championship Baja Deutschland, earning her an enthusiastic following there. 2002 was the year after Jutta Kleinschmidt was so dominant in the Dakar and elsewhere, so rally raids were big news.


Mitsubishi expanded Andrea's programme the next year to include all the major rallies. Her season began reasonably well on the Dakar, where she was 21st and fourth in the T2 diesel class. Over the year she steadily grew in confidence and picked up momentum. She was 16th in Morocco, but managed fifth place finishes in Tunisia, Dubai and the UAE, on her favoured Desert Challenge. In all of these, she was also winner or runner-up in the diesel class. Later in the season, she repeated her second place in Germany, to the delight of her fans.


2004 saw her best-ever four-wheeled Dakar. She was fifth, against tough opposition like Colin McRae, Luc Alphand and Hiroshi Masuoka, an excellent performance when you take into account that she was driving the second-string Mitsubishi as "water carrier" to the two prototypes, driven by Masuoka and eventual winner Stephane Peterhansel. Comparisons between her and Jutta Kleinschmidt continued, especially as Andrea was now driving with Jutta's former navigator, Andreas Schulz. Both women laughed off the comments, but it was true that both women were involved in scandal that year. Jutta was later excluded for an illegal engine change, but Andrea was cleared of wrongdoing after she helped to push Peterhansel's car with her own vehicle.


Further solid positions followed, with a tenth place on the Orpi Rally Morocco a highlight, but there was disappointment on the Baja Deutschland. Andrea had been tipped to win, but was forced to retire with mechanical trouble. She also competed in the Dubai raid that year.


Partnered now by Frenchman Jean-Michel Polato, Andrea entered the 2005 Dakar. She was driving the team's L200 pickup rather than the Pajero this time. Again, she was in the "support driver" role. Sadly, her rally ended at Atar, with crankshaft damage to the Pickup. The Mitsubishi team pulled her out of the event, as the vehicle was judged to be beyond repair.


After this disappointment, Andrea parted company with Mitsubishi. She took part in some raids later in the year in a private Nissan Pathfinder, assisted by Christian Schoen. They started the UAE Desert Challenge but retired on stage seven.


Andrea swapped cars again for 2006, electing to drive a KOS Buggy in European and North African rallies, as part of the new European Cup for rally raids. Her first event in the buggy was the Libya Desert Challenge, which was a problematic run, as the car was still very much in development. However, she still managed to hold the lead for some time and win the buggy class, coming second overall. She recorded outright wins on the Green Raid of China and the Grand Erg Tunisian raid. Sadly, a technical problem pushed her out of the UAE Desert Challenge. Away from rally-raids, she also won an off-road Kart-Cross event.


After 2006, she was absent from the rally raid scene for a long time. A return to the Dakar in 2008 was rumoured, but the event was cancelled. She remained under the radar for several more seasons, before returning to the South America-based Dakar in 2011, as part of the X-Raid team, driving a Man truck with Thomas Baumann and Philipp Beier. Although she was competing, she was more in a maintenance and spares-carrying role. Once again, she was driving a support vehicle for Stephane Peterhansel, who was now her partner. She finished 39th in the class.

Shortly afterwards, the pair went back to their motorcycling roots for the Sardinia Rally. Andrea won the Ladies' class, but did not feature strongly in the main standings.

In 2013, this turned into a supported Yamaha ride for five rounds of the Baja World Cup, taking in Morocco, Hungary, Romania, Spain and Italy. She finished in the top ten for her class on all five, and was either first or second lady rider. Late-season, she was even tempted back on to four wheels for the Rally Puglia e Lucania, in a lightweight Danisi Dust Devil T3 Buggy, a newly-homologated lightweight model. Andrea was not able to finish after the buggy ingested dust into its engine, but her team-mate was third overall.

In 2014, she continued to compete, in both mountain biking and rally raids. She drove the Dust Devil in the Baja Italia, an event hit badly by rain. She won class T3, by dint of being the only class finisher. Later in the year, she tested the Devil at Le Creusot in France, but did not actually race.

There was not much actual competition for Andrea in 2015. She remained with the Danisi team, developing the Dust Devil for a concerted attempt at the Cross-Country Cup in 2016.

The team rallied in the European rounds of the Cross-Country Cup, scoring a second place in the Italian Baja, and a third in the Baja Portalegre in Portugal. For a change, Andrea acted as the navigator this year, which she described as being unexpectedly fun.

In 2017 and 2018, Andrea and Stephane usually competed together, taking in a mix of Baja, offroad, motorcycle and even ice events. Andrea and her new co-driver Emma Clair won the TE class in the 2017 Italian Baja and 2018 Australian Finke Desert Challenge, driving an Acciona electric SUV. On ice, she usually drives a Yamaha buggy and won the Endurance section of the 2017 Ice-Tour Challenge at Val d'Isere. Her co-drivers were Stephane and his son Nicolas.

As co-driver to Stephane, she won the Abu Dhabi Desert Challenge, driving an X Raid-run buggy. She also co-drove for Annett Fischer on the Dakar, competing in the SxS category.

She and Stephane Peterhansel were married in 2016.