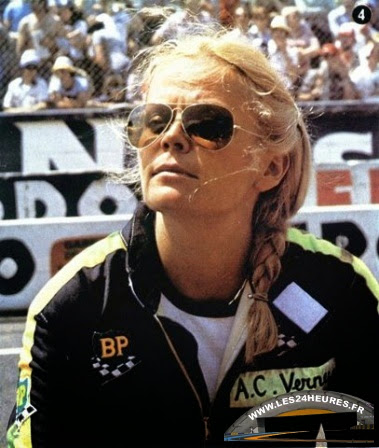 Being a resident of La Sarthe, hometown of the Le Mans track, you might expect France's Anny-Charlotte Verney to have visited the 24-hour race a few times. In fact, she holds the female record for the number of participations in the legendary event. Between 1974 and 1983, Anny-Charlotte was there - ten races in all. Her grandfather, Louis, was one of the people behind the setting-up of the 24-hour race, so it was perhaps in her blood, although her immediate family were not involved in motorsport at all.

This unrivalled ten-year record is the easiest place to start, when examining Anny-Charlotte’s career. Her first attempt at Le Mans, in 1974, earned her a respectable thirteenth place. She was driving a Porsche, with Martine Renier and Pierre Mauroy. Porsches of various types, usually privately entered by herself, were her favoured machinery until 1983. She used a similar car in 1975, as part of an all-female team with Corinne Tarnaud and touring car ace Yvette Fontaine. They were eleventh and second in their class, as well as being the first of three women’s teams that year. Anny-Charlotte, driving alongside Hubert Streibig and Helmut Kirschoffer in Louis Meznarie’s Porsche 934/935, was also eleventh in 1976, and fifth in class. Driving her own Carrera RS again the following year, she was not as successful, finishing 18th with Streibig, Dany Snobeck and Rene Metge.

In 1978, the Verney Porsche was backed by BP Racing, and Anny, Xavier Lapeyre and Francois Servanin were once more on the pace. They were twelfth and first in class. Switching back to the 934 in 1979, wholly self-financed this time, resulted in a 19th overall, third in class, for the team of Patrick Bardinon, Rene Metge and Anny-Charlotte, despite the car’s undoubted power. It was exchanged for a Malardeau Kremer 935 K3 in 1980, but this car’s gearbox failed after 18 hours.
Her best result was sixth in 1981, driving a Porsche 935. Her co-drivers were Ralph Kent-Cooke and team owner Bob Garretson. They were second in class. She seemed to prefer driving alongside men; some of her regular cohorts included Hubert Streibig, Rene Metge and Xavier Lapeyre.

A drive in the same car in 1982 brought another eleventh place, fifth in the IGTX category this time. Kent-Cooke had been substituted for Ray Ratcliff.
On her last attempt at Le Mans, Anny-Charlotte finally won a works drive with the dominant Rondeau team, along with Joel Gouhier and Vic Elford. Unfortunately they retired during the tenth hour with valve trouble.
She began her motorsport career as a rally driver, around 1972, although the date of this has been impossible to find. At around the time she would perhaps have started competing, there was an increase in the number of female rally (and circuit) drivers, possibly influenced by the relaxing of the rules about women competing in France. In common with  with the likes of Corinne Tarnaud, with whom she shared cars later, she seems to have developed her career partly within Bob Neyret’s Team Aseptogyl, in which many of her female contemporaries got their starts. She was not one of the big names on Aseptogyl’s rallying roster, but she remained loyal to them for some time.
In 1974, she won her class in the Paris-St Raphaël womens’ rally, driving a Porsche 911 Carrera RS. She finished second overall. Before that, she seems to have stuck to local French events, as her name does not appear as a driver in the entry lists for the big international rallies of the time. However, she is listed as a co-driver for Christine Dacremont and Raymond Touroul on the Bandama Rally, in 1973 and 1972 respectively.

In 1974, her name begins to crop up in the entry lists of both rallies and circuit races. On the rally side, she made occasional international appearances throughout the 1970s. In 1976, she rallied a Ford France-backed Escort RS 2000, and entered the 1000 Lakes and Moroccan rallies. She did not finish either of them. In 1977, back in a Porsche Carrera, she was fourth in the Tour de France Auto, with Denise Emmanuelli. In 1979, with the same co-driver, she retired from the Monte Carlo Rally.
Alongside her Le Mans efforts, and in parallel with her rally career, she was also a regular in the other big sportscar races of the time. In 1974, as well as Le Mans, she did the 1000km race at Le Castellet, in a Chevron B23, with Daniel Brillat. They were 20th, from 32nd on the grid. In a different Porsche Carrera, she was fourteenth, driving in the GT class with Marie-Madeleine Fouquet.

In 1976, she teamed up with Hubert Streibig in Louis Meznarie’s Porsche 934, for most of the European rounds of the World Championship for Makes. Sadly, apart from Le Mans, they did not finish any of them, due to various problems, including fires. For the Dijon race, near the end of the season, they swapped the 934 for a familiar 911 Carrera RSR, but the clutch failed. The following year, as well as Le Mans, they were fifteenth in the Le Castellet 500km.

The Streibig/Verney partnership continued for the first part of 1978, with a fifteenth place in the Dijon 6 Hours in Anny-Charlotte’s Porsche, and a DNF in Hubert’s TOJ SC303 in the Monza European Sportscar Championship round.
1979 saw her enter two 24-hour races: Le Mans and the Spa 24 Hours. She renewed her connection with Ford France and drove an Escort, backed by BP, at Spa. Her co-drivers were Jean-Pierre Delaunay and Cyril Grandet. They did not finish.
She did yet another 24-hour race at Daytona in 1980, coming ninth with Bob Garretson and Skeeter McKitterick in a Porsche 935 K3, similar to the one she would later drive at Le Mans, run by Dick Barbour Racing. At the Dijon race in September, she got together with Hubert Striebig again, and shared his TOJ prototype. They did not finish.

For a change, competed in the Spa 24 Hours in a Ford Capri in 1981. It did not provide her, Alain Ferté and Jean-Louis Schlesser with a finish, after its engine blew.

Another race at Daytona was planned with the Garretson team for 1982, but it did not happen, although she did join the team for Le Mans. Another planned drive with Desiré Wilson, in a BMW, in the Spa 24 Hours, did not come to fruition.

It was a similar story for 1983; a planned BMW drive at Spa did not come off, and her last Le Mans appearance was her only big race.

After this, her circuit-based exploits were focused on French touring car races, and she raced sportscars only sporadically. In 1984, she was twelfth in the Vallelunga 500km in a BMW 635 CSi, with Roger Dorchy and Philippe Haezebrouck.

In 1986, she was part of an all-female team for the Spa 24 Hours, driving a Toyota Corolla with Chantal Grimard and Henny Hemmes. They were 25th.

Her last big circuit race was the 1990 Spa 24 Hours, in which she shared a Nissan Skyline GT-R with Hideo Fukuyama and Naoki Hattori. They were twelfth.
If this was not enough, Anny-Charlotte was not only racing sportscars. In 1976 and 1977, she tried single-seaters, in the Formula Renault European Challenge, alongside some big names, such as eventual winners, Didier Pironi and Alain Prost, and her rally rival, Jean Ragnotti. She was not among the front-runners.

At was at this time that she also started racing touring cars, apparently beginning with a Ford Capri in 1977, which she used in most of the French Touring Car Championship, finishing seventh at Magny-Cours.

In 1978, she drove a BP and Ford-supported Escort RS2000 in the French Touring Car Championship, She scored fifth places and class wins at Montlhéry and Le Mans, and was fourth in the championship.

In 1979 and 1980, the results for French touring car races are very hard to find, but Anny-Charlotte appears to have carried on in the RS2000, and some sources describe her as winning some production car races.

In 1981, she is said to have driven a Peugeot in the French championship, but no results are forthcoming. In 1982, she certainly did drive a Peugeot 505 in the FTCC, but she was not as competitive as she could be, and had a best result of eighth, at Croix-en-Ternois. This was enough to defend her French ladies’ title, which she had held since 1976, from Jacqueline Dantec.

In 1983, the year of her last Le Mans appearance, she switched makes again for the FTCC, driving a BMW 635, run by Bodard Race and Tuning. Although she did quite well in some of the heats, her best performance in a main race was eighth, at Rouen.

In 1984, she drove a little Alfa Romeo Alfetta GTV/6 in that year’s production-based championship, but only did part of the season, winning the ladies’ prize with two tenth places at Montlhéry and Nogaro.

From 1982, yet another of Anny-Charlotte's new challenges was rally-raids. She seemed to enjoy endurance-based events more than high-speed sprints. Notoriously, that year, she just managed to live down the indignity of navigating for Mark Thatcher, son of the British Prime Minister Margaret Thatcher, and getting lost in the desert. It was her first attempt at the marathon rally. She returned to the Dakar in 1985 and was 56th overall in a Mercedes 280 GE. 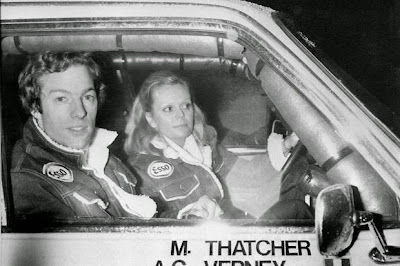 (Image from The Times)
In 1986, she drove for the Toyota works rally-raid team. She was 20th overall in that year’s Dakar, with a diesel class win, a career best for her. She also won the Coupe des Dames in the Pharaons Rally, and appears to have been third overall.
The following year, she drove a Mitsubishi in rally raids, including the Atlas Rally, and achieved some good class finishes. She also used a Mitsubishi for the 1988 Dakar, but did not finish. After that, she moved on to a Nissan Terrano, and was more successful, with good showings in class, a stage win on the Baja 1000 and a second Pharaons Rally ladies’ award. The Nissan team would remain her motorsport home for the next three seasons, mostly as part of their marathon rally team, but occasionally appearing on the circuits, too, as in her 1990 Spa 24 Hours appearance.
She retired from active participation in 1992, aged 48. For quite a long time, she was rather a reclusive figure, but in recent years, she has given interviews, and also appeared on television in the UK, talking about her Dakar experiences.