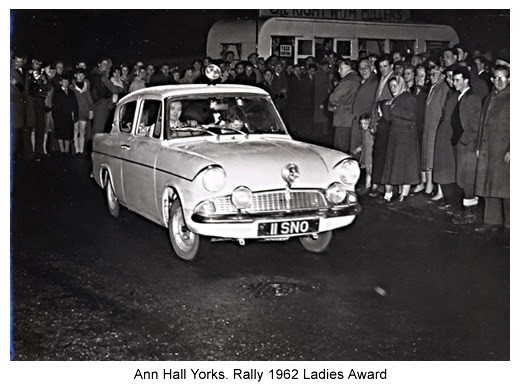 Throughout the 1950s and early 1960s, Anne Hall (or Anne Newton in the early days) was one of Britain's best known rally drivers, and certainly one of the leading ladies. She too up the sport just after purchasing her first sports car in 1951, a Jaguar XK120. Everyone was surprised when Anne and her sister came seventh overall and won the Ladies' award in the Open class of the RAC Rally. The Jaguar became Anne's car of choice for the next few years as she rallied around Britain, gaining experience and some good finishes, such as a repeat of her Ladies' Open victory in the 1952 RAC event. Another highlight was a ninth place in the competitive Rally of the Tests in 1953.


In 1952 she switched seats and took up navigating, after she was talent-spotted by the Rootes team and their established lady star, Sheila van Damm. Sheila and her new co-driver rallied a Sunbeam Talbot all over Europe and became European Ladies' Rally Champions. One of their best finishes was a tenth in Monte Carlo that helped Rootes to the team prize. They parted in 1956, as Sheila was winding down her career. Anne sat beside another British lady star, Nancy Mitchell, that year, and joined her in several impressive finishes, including strong placings in class in the Lyon-Charbonnieres and Alpine Rallies. During this time, Anne continued to drive in selected rallies herself. She drove a Ford in the 1956 Alpine Rally, her first major outing for that marque.


For 1957 she returned to the driving seat with the works Ford team, driving the Zephyr. She won the Coupe des Dames in the Tulip Rally. In 1958, she drove another Zephyr at Monte Carlo, but suffered an accident. Anne was an enthusiastic participant in the Monte Carlo Rally, which led to her being nicknamed "The Queen of Monte Carlo". She was the first British woman to win the Coupe des Dames since 1932 and had a best finish of tenth, as a navigator. In 1958, she was 78th in the Zephyr, assisted by Nancy Mitchell and Lola Grounds. That year, she drove the Anglia on the RAC Rally as well.


It was in this car that she was 36th in the 1960 Monte. She and Val Domleo crashed out of the Alpine Rally. In 1961, the same pairing added a Coupe des Dames from Monte Carlo to their collection. One of the biggest achievements that Anne is remembered for also happened this year: her third place on the arduous East African Safari. Ford team bosses had urged her to slow down and make sure that she finished, so that they could win the Ladies' trophy, but she was having none of it and wanted to push for the win. Driving a Zephyr again, she was seventh in the RAC Rally later in the year.


She went back to the Anglia in 1962 for the RAC, Monte and Alpine events, but with less success.


In 1963, she sampled the Ford Falcon rally special. Her first outing was inauspicious: an OTL on the Monte. A switch to the Cortina for the rest of the season brought better results, the best being 16th on the RAC Rally. A return to the Falcon gave her another finish on the 1964 Monte, but after that, she moved to the Rover team, driving different models in the Acropolis, Spa-Sofia-Liege, Alpine and RAC events. Her navigator for much of the season was Denise McCluggage.


1965 was her last season as an international driver, and it was an adventurous one. Anne and Lucille Cardwell rolled their Mercedes 300SE on the Safari Rally and were unable to continue, and Anne, in a Rover, also crashed out of the Acropolis Rally. She managed to finish the RAC and Alpine Rallies, but not as competitively as she might have liked.


Back home, in domestic events, she drove in the Targa Rusticana road rally at least once, and finished eighth in the Rally of the Tests in 1961. 1961 also saw Anne's first major win, on the Morecambe Rally, partnered by Val Domleo and driving a Ford Zephyr. It was the first win for a ladies' team on a British national event.


Although Anne made a comeback and was still competing in historic events as late as 1993, she had not been well for a long while before her death in 2003. Perhaps fittingly, she died on the eve of that year's Monte Carlo Rally.