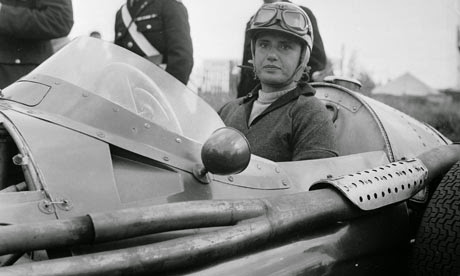 The first woman to enter, and then complete, a Formula One Grand Prix was Italian Maria Teresa de Filippis, in 1958. Her tenth place in a World Championship race at Spa-Francorchamps was a milestone in motorsport history and a high point in a career that had lasted almost twelve years.


Maria Teresa was a contessa, the daughter of an Italian count. She learned to drive at a young age and took an interest in sports, especially horse-riding, at which she excelled. In 1948, her two elder brothers dared her to enter a hillclimb in her Fiat 500, saying that she would not be as competitive as she was on her horse. Both brothers took part in local races and speed events.


To their surprise, their little sister not only completed the hillclimb, but won her class too, plus a special award for "Driver of the Meeting".


The racing bug had truly bitten. Maria Teresa acquired a Urania 750cc sports model for the 1949 season and campaigned it around Italy. In regional races she scored three class wins and three seconds. In the bigger races she also took some good finishes, the best being a sixth in the Stella Alpina. She was ninth in class in the Coppa d'Oro delle Dolomiti but did not finish the Coppa Toscana.


She carried on with the little Urania for part of 1950, entering her first Mille Miglia with Motta. they failed to finish, but so did a great many others that year. Driving solo, Maria Teresa was tenth in the Premio di Apertura.


Part-way through 1950, Maria Teresa hooked up with the Formula One driver Luigi Musso. they became close friends and team-mates, both racing 750cc Giaurs on occasion. Soon, Maria Teresa became caught up in Musso's complicated love life , although they seemed to bring out the best in one another on the track. She was ninth at Collemaggio, twelfth at Modena and sixth in the Circuito di Senigallia. She carried on improving throughout 1951, with another ninth at Castello, third in the Coppa Ascoli and fourth in the Cidonio Grand Prix.


Maria Teresa and Luigi Musso continued their arrangement through 1952, despite Luigi already being married. They carried on campaigning their Giaur sportscars around Italy, although they were getting a little old and outclassed by then. Musso also raced a series of more potent Fiats and Maseratis.


It was time for a change of car. The Giaur was sold and replaced by an OSCA 1100, bigger and faster than its predecessor but not quite as reliable. It failed to get to the end of the Circuito di Senigallia or the Montenero Cup, but gave its owner some superb race results. She was fifth at Avellino and second at the Trullo d'Oro and the Circuito di Sassari. Away from the circuits, on the famous Pescara road course she was fourth in the 24-hour race with a class win, beaten only by three cars with vastly superior horsepower to her own.


At the end of 1953, Maria Teresa ended her romantic involvement with Luigi Musso, although they remained friends. When Musso was killed during the French Grand Prix in 1958, she was deeply affected and later cited this as one of the reasons for her retirement not long after. However, this was five years into the future, and after the 1954 season she bought Musso's old 2000cc Maserati A6GCS to race herself.

1954 itself was spent racing an OSCA MT4, in Italy. She had a best finish of second in the Napoli Grand Prix, and was also fifth at Caserta, and sixth at Pergusa and Siracuse. These were all non-championship Grands Prix.


1955 was a year of contrasts: she won a race in Sardinia and was runner-up in the Napoli Grand Prix. Going back to her roots, she took part in some long-distance hillclimbs and won the Catania-Etna event outright. Still in Sicily, she was thirteenth in the Giro di Sicilia, against a big field.


In another exciting (in a different way) moment, she crashed out at Mugello spectacularly. Emergency services spent quite some time helping Maria Teresa out of the stricken Maserati, which was dangling half-over a cliff. In another stroke of poor luck, she crashed hard in Sardinia and was unable to finish her season.


Needless to say, Maria lived to tell the tale. She was back with the Maserati for 1955 and was more ambitious than ever, attacking the both the Mille Miglia and Targa Florio, in which she was ninth. She was driving for Officine Alfieri Maserati with Luigi Bellucci. Most of her big races that year were endurance events; she was tenth on the Giro di Sicilia and a strong third in the Messina 10 Hours, driving with Musitelli. She also tackled the Mille Miglia, but did not finish.


1956 got off to a terrible start. Maria's first trip to the Americas, for the Buenos Aires 1000km, left her with a broken shoulder. She had hit a telegraph pole early on after swerving to avoid another accident.


After a recovery period of some months, she returned to the Italian circuits that summer. She was not given to over-analysing accidents and was not afraid of what might happen to her. As a consolation, she won at Caserta and came second in the Napoli Grand Prix for the second time. She even returned to Buenos Aires for the 1000km the following year, although she and Alberto Rodriguez-Larreta retired their OSCA TN 1500 with electrical trouble.


Ever-keen to advance herself, Maria joined Scuderia Centro Sud, a leading racing team, for 1957. However, she did not receive a great deal of financial support and struggled, competing in a handful of races with no real results to show for it. Nevertheless, she carried on with her push up the sporting ladder and a acquired a Maserati 250F Grand Prix car, with the intention of entering Formula One with the Scuderia.


The car had a good debut in the non-championship Syracuse GP. Maria was fifth and the highest-placed debutante. DNFs at the Pergusa GP and the Messina 10 Hours were not as encouraging, but she carried on regardless and entered her first World Championship Grands Prix. This was a first for a woman.


The 250F had been the privateer car to have only a couple of years ago. It had taken Juan Manuel Fangio to world titles and won countless races, but was now out of date compared to the Coopers, BRMs and Vanwalls that dominated 1958. When Maria tried to qualify for the Monaco Grand Prix, she was far from making the final sixteen, but in good company; fifteen others failed to make the cut.


A month later, Maria was lining up on the grid for her first Grand Prix start, the 1958 Belgian Grand Prix at Spa. From 19th on the grid, she worked her way up to tenth, behind Jo Bonnier and winner Tony Brooks. It was a small victory, for Maria and for a lady driver. Fangio himself commented on her fearlessness, and commented that she drove the Maserati "too fast"!


Buoyed by her comparative success at Spa, she qualified her Maserati for two more Grand Prix. In Portugal, she was forced out by engine trouble after only six laps, but at Monza she completed 57 of the 70, coming tantalisingly close to a final classification again.


Having formed a close friendship with the French driver Jean Behra, Maria joined his racing team for another attempt at the Monte Carlo Grand Prix. She was driving a Formula Two Porsche and failed to qualify. This was her last World Championship race.


Her only other big race that year was the British Empire Trophy at Silverstone. It was her first visit to the United Kingdom. She qualified her old 250F but did not finish the race.


In August that year, Jean Behra was killed in a sportscar race at AVUS, Germany. Maria had intended to be in that race too, but did not take part. She was overcome with grief at not being there for her friend. Having lost many of her friends and her former lover, she lost her nerve and turned her back on motorsport completely. She threw herself into family life and could not bear to set foot on a circuit for many years.


By 1969, her wounds had healed somewhat. She became involved with a club for former Grand Prix drivers and was active in its administration for many years. Since then, she has spoken freely of the great cameraderie she shared with her fellow drivers during her racing days, and has expressed disappointment that the F1 stars of today are missing out on it.


In 2006, at the age of eighty, Maria Teresa drove a car in anger for the first time in decades. She was an honoured guest of Maserati at the Goodwood Festival of Speed and had been invited to demonstrate its latest GT racer, with Jodie Kidd and Troy Bayliss. This most "from the heart" of drivers received a warm reception. In recent years, her profile has risen slightly. In 2012, she was chosen to appear in advertising for UBS, alongside Yo-Yo Ma.