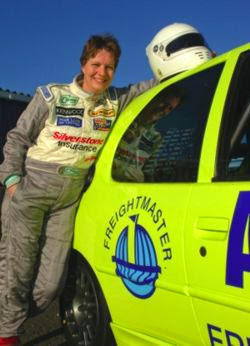 Annie in the BTCC

As a car-mad teenager, Annie Templeton had to make do with Scalextric and bombing around fields with her sister in their £10 banger. It was only after her marriage to husband Jim that she began competing.


The pair's honeymoon was spent on a muddy hill in a trials car. From 1987 to 1998 Annie made her name as a skilled trials driver, with several prestigious outright wins to her name. A switch to classic trialling in an Allard J2, and then a 1933 MG KN Special, brought her into more high-speed competition. The MG was capable of more than 150mph, with no seatbelts, and Annie was hooked on the adrenalin. She and Jim attacked the classic racing circuit with style, and she made off with some impressive trophies. In 1995 she won the Kimber trophy for the best pre-war car of a meeting, and in 1997 she won the VSCC's coveted Brooklands Memorial Trophy after a win at one of their meetings. At a 2001 MGCC meeting she also won the Kimber race outright. She is justifiably proud of her performances in allcomers races, where she was able to get the better of modern machinery in the MG.


A couple of nasty accidents made her and Jim think hard about continuing in historic racing, and in 1998 Annie switched to the MGF Cup for the bulk of the season. She continued in the series until 2000 and showed herself to be a competent driver in a modern car, too. Her best finish in this well-supported championship was eighth. She was driving for Tech-Speed Motorsport/Freightmaster, and one of her team-mates was Suzi Hart-Banks.


In 2001, Tech-Speed transferred their operations to the British Touring Car Championship, and Annie secured enough sponsorship to go with them. She competed in the bright yellow Peugeot 306 GTI for two seasons, in the Production class. She had an excellent finishing record in the highly competitive series, which meant that she was able to pick up any stray points at the end of a race. This gave her a best result of fifth in class. If there was a scrap to be had for those points, she was there and up for it, but she lacked the pace to challenge for overall honours. In 2001, she was 19th overall in the Production class, and in 2002, thirteenth. Nevertheless, she enjoyed her racing, and being part of a big championship. At a Mondello Park BTCC round, she also got the chance to do some rallycross when local driver Dizzy Ryan offered her a drive. Of course, she took it.


For 2003, she was part of a well-publicised all-female team in the British GT Championship, with Amanda Stretton. The pair had a best finish of sixth at Silverstone, before the sponsorship money ran out halfway through the season. Their other results were a eleventh at Donington and a seventh at Snetterton. However, Annie had struggled with the Chamberlain-backed "Girlpower Racing" Chrysler Viper, and was off the pace set by her team-mate and the rest of the field.


A return to historics in the summer brought happy times, including another win in the MG.


Annie was off the motorsport scene for a while, but came back in 2005. She entered the Formula Woman Nations Cup, representing England in a Caterham 7 against other female drivers from around the world. Since then, she has been active in the MG in historic meetings, winning several trophies, including one in an MG race at the SeeRed Festival at Donington. She is now more commonly referred to as Anne Templeton.


In 2009, the MG KN was put up for sale, but the Templetons obviously had a change of heart, as Anne was seen racing the car at the 2010 Silverstone Historic Festival. She retired and moved to France shortly afterwards.