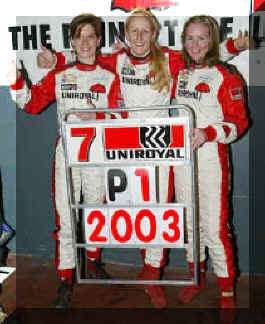 Yet another versatile Belgian, Fanny branched out into GT racing later in her career, although most of her big successes came in touring cars.

The Duchateau family were all involved in karting (Fanny's father ran his own kart track) so it was inevitable that Fanny would take it up at a young age. She began at seven, in 1984. She was Belgian junior champion in 1992, sixth in the European Championships in 1994 and a member of the winning team in some notable 24 hour- races in Belgium. After a glittering kart career she moved on to cars in 1997, at the age of twenty.

From the beginning, Fanny was quick and competitive. In her first season she was fourth in the Belgian Renault Championships and second in the VW Fun Cup series. The following year she won the Fun Cup outright, a first for a woman.

For the next two years she continued as a front-runner in the Fun Cup and also tried her hand at national-level sports and touring car races. In 2000 she was the runner-up in the VW series and attempted her first Spa 24 Hour race. She drove a Gillet Vertigo Streiff but failed to finish. Always keen to try new forms of motorised competition, Fanny also entered her first rally, driving a Ford Ka in the Rallye Condroz. She was 75th.

She continued her rallying adventures in 2001. As part of a driver exchange programme organised by the two national motorsport bodies, Fanny got the chance to sample winter rallying in Canada. She did not finish the Perce Neige et Glace Rally, or the Charlevoix event in Quebec, in her SEAT Ibiza, but she returned a better driver for it. In the Rallye Condroz in 2002 she was second in class N2 in a Volkswagen Polo, 37th overall.

In 2002 Fanny was receiving works support from VW, mainly due to her Fun Cup success. She was entered into the Belgian Procar championship in a Bora turbodiesel, and carried off the Division Two crown. She often finished in the top ten alongside more powerful Division One teams. Spurred on by her good results, she hooked up with Gillet Vertigo Streiff again for the Spa 24 Hours. The team was 26th after a fire.

2003 was a busy year. Rallying in the Polo again featured large in her calendar. She was 35th and second in class N2 in the Omloop van Vlaanderen (Tour of Flanders) rally and third N2, 44th overall in the 12 Hours of Haspengouw event. The big Condroz rally was her only disappointment as she failed to finish.

The Fun Cup had not been forgotten either. It had expanded into a multi-driver VW enduro series and Fanny, Sylvie Delcour and Sabine Dubois were competing as the Rain Tyre Ladies Team in selected events. Mechanical troubles meant that they suffered a few retirements, but they also scored a momentous win in the 25 hour race at Spa, Fanny's favourite track.

Towards the end of the season, Fanny was invited to join the Chamberlain TVR women's team for the inaugural Le Mans 1000km. She drove alongside Amanda Stretton and Liz Halliday, after fellow Belgian Vanina Ickx pulled out due to illness. The girls were a respectable 19th overall, closely behind their more experienced male team-mates.

Sportscars became her main focus for 2004. She had been selected to drive the Rollcentre Noble GTO in the British GT championships, with young GT ace Simon Pullan. Testing went very well, and Pullan remarked how quickly Fanny learnt the car. In their first race at Donington they were 13th, fourth in the GT Cup class. The second race ended in a slightly disappointing 18th. Mondello Park in Ireland gave the pair their best result: two eighth places and a second in class. Sadly, they were unable to match that form for the rest of the season. They failed to finish both Snetterton races and managed a 16th and 13th at Castle Combe, regarded as a good circuit for GT cars. Simon Pullan parted company quite suddenly with Rollcentre and Fanny drove with team boss Martin Short at the Oulton meeting. Both races ended in DNFs and Fanny herself was replaced by Harvey De'ath, who fared only marginally better.

However, back in Belgium, her efforts had not gone unnoticed. She was invited to join Zwaan Racing for the Spa 24 Hours, driving a Chrysler Viper with Marc Duez, Loic Deman and Stephane Lemeret. Unforunately they did not finish. She also returned to rallying for the Boucles de Spa, and was 25th overall in a VW Polo. Her co-driver was Denis Borremans.

At the time of writing, Fanny's future in motorsport is unclear, and she does not appear to have competed since 2004. She has become a mother to at least one child.